Regatta for a dummy 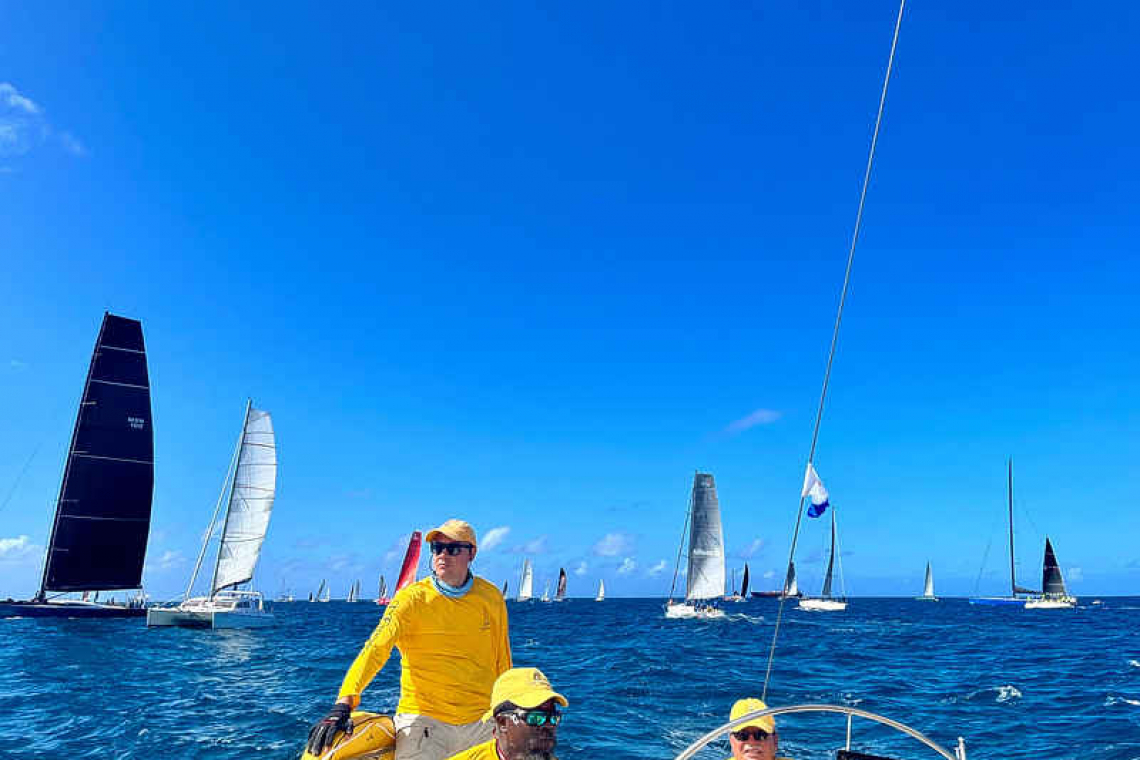 Around the island with prizewinning team L’ Esperance

The 42nd edition of the St. Maarten Heineken Regatta is now officially behind us – and what serious fun it was! Having absolutely no sailing skills, I would never have imagined being a part of anything other than the usual parties. But this year, I got the opportunity to have the full regatta experience – all from the deck of a competing boat.

At first, I was a bit hesitant: Was I going to get sick? Would I fall into the water and get run over by boats? Would I slow the crew down as I did not even know how/when to pull up a rope? In other words, would a total sailing dummy survive and, most importantly, would the sailing crew still be able to thrive with me aboard?

But, after some – okay, after a whole lot of reassuring words, it was decided. This dummy would join the well-oiled crew of Bobby Marina’s prizewinning L’Esperance boat for the famous Around the Island race on Friday, March 4, during the 42nd St. Maarten Heineken Regatta.

Around 8:30am on D-Day, my shaking knees made their way to the dock at Bobby’s Marina. Here, I met other people in bright yellow long-sleeved shirts – the actually-useful crew members, I assumed. Some asked about my non-existent sailing experience, to which they responded with jokes about the boat’s life vests and emphasis on the importance of sunscreen, while others discussed strategy for the 13-mile clockwise circumnavigation of the island. They all seemed to have high expectations of the upcoming race, particularly because L’Esperance had won first place in their CSA 6 Category the day before.

After we were all positioned on the deck, everyone (re)applied sunscreen, and I was told I would just have to quickly make my way from one side of the boat to the other whenever I heard the word “jive” or “tack” – we set sail for Simpson Bay, where the race would begin.

Here, we sailed in circles as we waited for our start signal. At 10:25am, we would be the fifth group to start, together with the five other boats in the same CSA 6 category. As Captain Robert “Bobby” Velasquez had reassured me many times, I was way too distracted by the views of the island, all the boats around us, the adrenaline in the air, the jives and the tacks, and the excited chatter from all around to even think about my seasickness.

When the warning signal went off, we all started counting down while Bobby tried to manoeuvre us towards the best possible starting point. Off we went – and what a cool sight it was to set off and sail together with all those other boats. I felt pretty useless, but quickly learnt that I was just there for the weight and the vibes – and to share my experience with our readers.

Shortly after we started, there were some issues with one of the sails: the spinnaker. Of course, I did not fully grasp the problem, but there seemed to be a problem rolling and unrolling it as it had gotten stuck somewhere. The crew had to take it down and unroll it by hand, but even then, it would not work. Eventually, we continued with a smaller sail, but we had already lost our advantage.

Thankfully, that did not seem to spoil the mood on the boat’s deck. The crew explained to me that we were still in the race as the other boats had to give us more time due to the handicap time of L’Esperance and because they placed first the day before.

We talked, joked, snacked, and jived and tacked like no tomorrow – like one of the team members said, “Sailing is a lot of dumb sitting.” It really was: there was plenty of time to zone out, enjoy the breeze and ravel in the magnificent views. We saw dolphins and pointed out different properties, rocks, beaches and other important sights to one another.

Of course, several team members attempted to give me a sailing 101 lesson, but most of the information did not stick. What did stick with me was how well everyone worked together. Even this sailing dummy turned the winch to make a rope go up – or down, who knows?

After about four and a half hours, we passed the finish line and returned to Bobby’s Marina. Here we heard that we placed second despite the spinnaker troubles – time for ti punch, sandwiches, cookies, and salmon patties. By the end of the regatta, L’Esperance had placed first in their category with two first-place and three second-place finishes. In other words, the boat and crew had thrived despite having had a regatta dummy on board during one of their most important races – what an accomplishment!