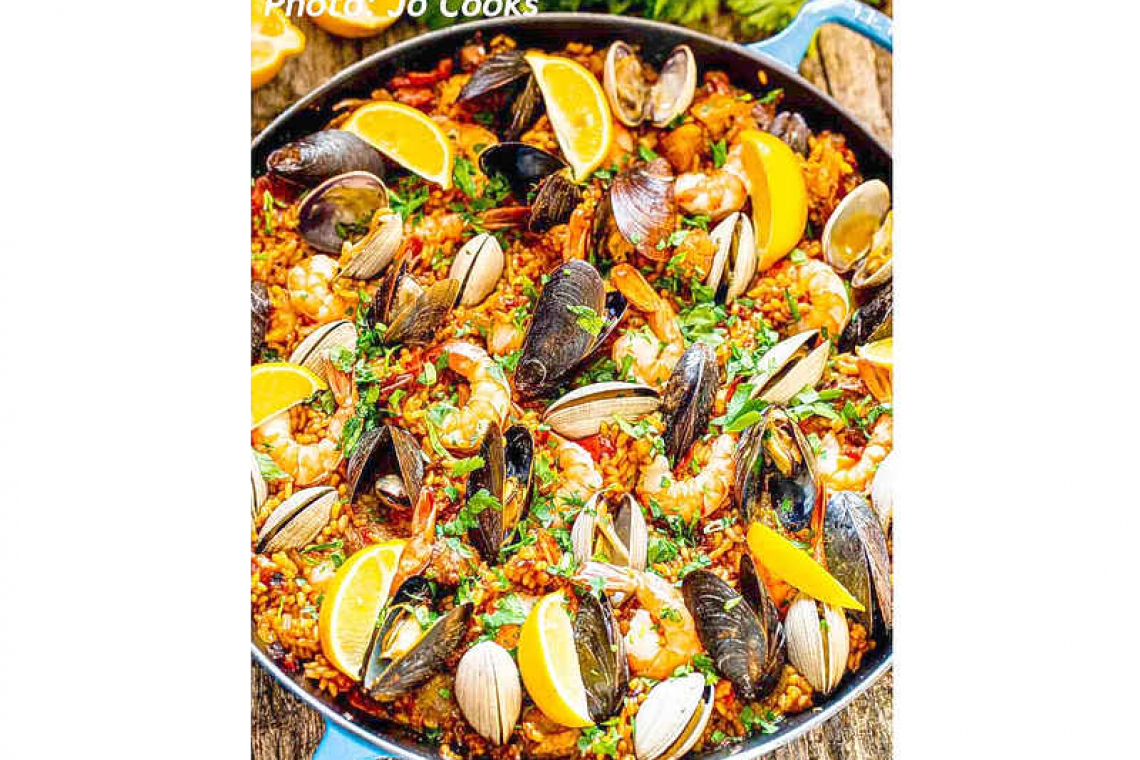 As our weather is cooling thoughts of warm dishes come to mind, and the nicest kinds of dishes we can enjoy, (in what really is warm weather,) are usually cooked over a fire.

What dish can be warm, stew-like and cooked outdoors over a fire/gas?

One of the best would be a paella. Pronounce paella as – “pie/eh/ja” as in ja, ja!

It is said that Spanish paella originated in the town of Valencia on the Mediterranean coast.

Valencia, is one of Spain’s 17 “autonomous communities.” The Comunidad Valenciana is made up of three provinces – Castellón, Alicante, and Valencia. Valencians have their own language, Valenciá, similar to Catalán, spoken in neighboring Cataluña. - Wikipedia

Now paella is not really a gravy/stew type dish, it is somewhat dry but it is filled with lots of different ingredients and rice. It is a great dish to feed a crowd and soul satisfying at best. Paella dishes are not just about seafood, as another popular version is made with chicken and rabbit too.

The name of the dish comes from the large pan, called a paella, in which it is cooked.

It is considered a truth that the paella evolved from the servants of the Moorish kings mixing the left-overs from royal banquets together to take home to eat. This dish was not an original from some famous persons chef but a peasant’s food that everyone enjoys these days.

Valencian cuisine’s basic ingredients are vegetables, seafood and meat. Rice dishes can be found in many forms, with the paella being the most famous. It is also an area known for its citrus fruit – the delicious and well-known Valencia orange is one of the juiciest on the planet.

This part of the Spanish coast was invaded over the years by all those who thought Spain would be an easy victory. The Phoenicians, Greeks, Carthaginians, Romans, Moors, and Visigoths all descended upon this coast over the centuries. Eventually, it was the Romans who founded the city of Valencia in 138 B.C. Valencia is of Latin origin meaning strong/powerful/brave/healthy.

The Moors, from across the sea in Morocco, North Africa eventually arrived and ruled the region in the 8th century for about 500 years. The influence of the Muslims can be seen in both culture and cuisine. They introduced rice, sugarcane, oranges, and almonds to Spain but they also set up irrigation systems which were far more advanced to the Roman ones already in place.

Eventually the Christians, once again, took over in the 15th century.

Rice dominates the menus in this region. Besides paella, one can enjoy a rice stew called arroz caldoso and baked rice dishes like arroz al horno and arros amb costra made with an egg crust.

With high-quality rice grown right there in the region it is no wonder one finds so many wonderful dishes on the menu. Rice is often paired with meat from the mountains – this includes game, lamb, goat, pork, beef, dried meat and many types of sausages. If you are ever inland, do try the dish popular throughout the province called Castellón – it is made with white beans, meat and bacon fat.

Valencia’s coastal menus offer all kinds of delightful seafood. Vegetables and beans are also plentiful; arroz empredrado is made with tomatoes and codfish covered with white beans!

Duck and chicken and sauces made up of olive oil, paprika, garlic and/or orange reign supreme.

One does find good wine grown nearby. The D.O. of Alicante is famous for sweet dessert wines and a wine called Fondillón, – white wine with a high alcohol content. There is also a local refreshing drink made from earth almonds called horchata!

Paella is traditionally cooked over an open fire. Frying was developed into an art by the folk who lived in the region. Wood of a slow-burning quality was hard to come by, the wood used in the Mediterranean burned quickly so frying was the way to go, although this knowledge and the longer cooking of paella does not really add up.

The most popular Spanish rice is called Bomba. If you see this on the shelves think about making a paella with it.

There are dedicated cooks/chefs of paella, they are called the Paellero.

Different chefs have different opinions, the making of this dish can be quite controversial.

Saffron is a must, it is this that gives a gentle flavour and turns the rice yellow – it is expensive but worth using.

Some paelleros say never use certain ingredients, some say always!

Onions and garlic are some of those ingredients to add to paella or not, garnish with green peas and/or beans or do not.

You can add artichokes and red or yellow peppers, or not.

Find a recipe you like to use. As for us, we love the addition of all seasonal and fresh ingredients to a seafood mix.

The layer of dry rice in the paella pan should not come above the joint on your finger.

Add the right quantity of stock once, don’t add more – but for those still practicing making this dish, add again if necessary!

When you make paella, keep the fire as hot as you can get it – the rice always needs to be boiling.

Paella should not be stirred too often once it has started cooking, spoon the broth over any dry spots.

The rice should be “al dente” however we prefer it softer, it must not be mushy though.

Our preference is for only seafood with no added chicken or meat, although some chorizo sausage does make for a nice variation on occasion.

Bring wine and seafood stock to a simmer in a pot

Use a 16” paella pan over medium-high heat

Add olive oil and heat until a slight haze rises

Add paprika and salt to taste (a good pinch)

Stir and sauté until tomatoes are reduced

Level the rice evenly across the pan

Add the warm white wine and stock in one go

Cook without stirring, 10 minutes or until rice is as you like it

Lay prawns in a neat layer over the top

Turn prawns over as they start getting pink

Add mussels that have been steamed in wine, garlic and parsley at the end

Discard any that did not open

If everything has worked out as you hoped, there should be a slight crust at the bottom of the pan – this is the much-enjoyed socarrat.

Scatter with chopped parsley – Set in the centre of the table – Serve from the pan, with wedges of fresh lemon.

Variation – any seafood you like, such as clams, scallops, firm white fish, lobster, etc.

Arroz con Costra – Rice with egg crust. This dish can be cooked in a paella pan, large frying pan or ceramic dish BUT it must be able to withstand the open flame for the sauteing needed before baking.

Season and stir all together

Add broth and stir once, make sure all ingredients are in a layer

When most of the broth has been absorbed, turn off the heat, pour beaten eggs over to cover entire pan

Remove from oven, cover and allow to sit for 5 minutes