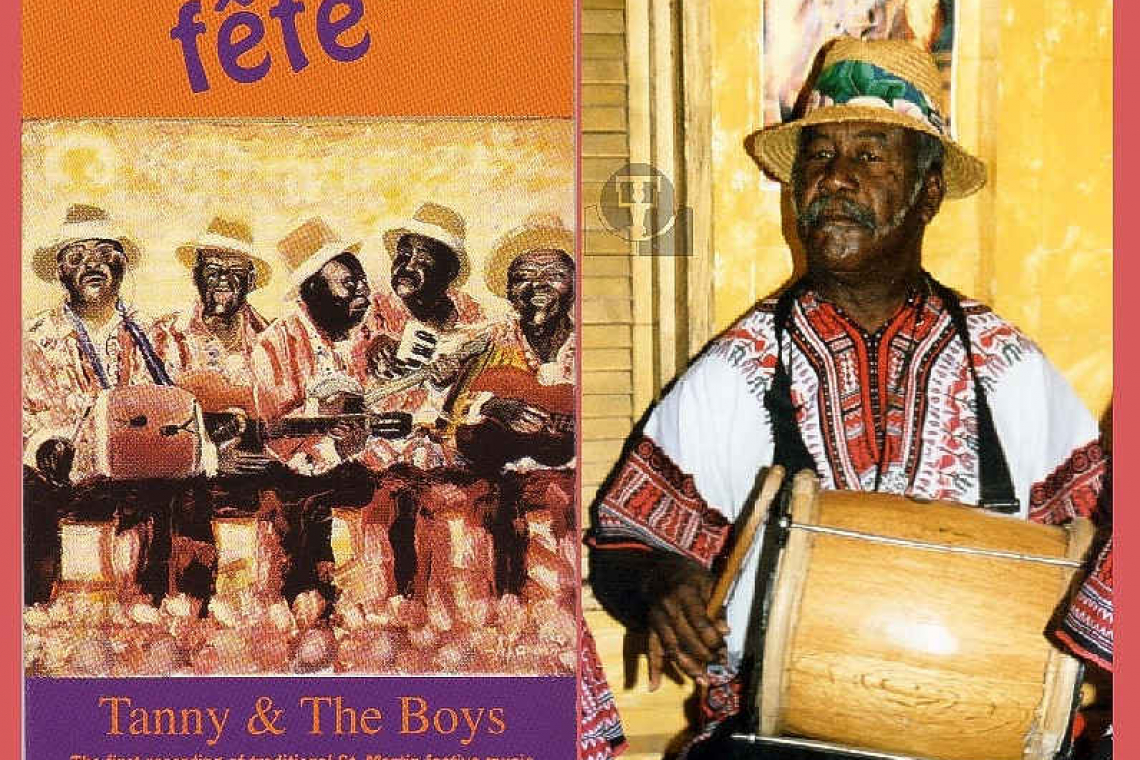 George leaves his wife Wilhelmina Violenus Hughes; his children and families; his brother Eddie Violenus and family; and numerous family and friends. He also leaves countless fans of the legendary Tanny and The Boys string band, of which he was a stalwart member.

George Bernard Violenus was born to St. Martin parents in Aruba on June 29, 1938. He was a lifelong musician who, since age 17, played especially the tambora, a traditional Caribbean drum instrument.

“George sang with Cortijo out of Puerto Rico and Cuba’s Chapotin and Mantansera when those musical groups played in Aruba during the mid- to late-1950s,” according to Fête – Celebrating St. martin’s traditional festive music (revised edition).

“On St. Martin, in the early to mid-1960s, George sang with Butcher & The Boys,” and in the late 1970s, he began “keeping the sweet rhythmic drumbeat for Tanny & The Boys,” according to the HNP publication.

“Against the background of both English Caribbean stringed instruments and Afro-Latin percussion,” Tanny & The Boys had “a style unique to St. Maarten,” wrote US cultural researcher Michael Esposito in his travel blog in 2013.

George has been called elsewhere the “observer” of the band with which he played a classic Caribbean music form for some 30 years. But his silent observing manner, alongside the largely popular singers Federico “Culebra” Smith and Maxime Reed, and bandleader Nathaniel “Tanny” Davis, probably had to do as well with his emerging over the years as the group’s manager.

During the production of the string band’s debut Fête – The First Recording of Traditional St. Martin Festive Music (HNP, 1992), George was one of the group’s primary source contacts for Urmain “Youmay” Dormoy, music arranger and conductor for the album.

When requests came from throughout the island and abroad for a Tanny and The Boys performance, George was essential to managing the appearance, especially from the late 1990s. When the band appealed to the public for funds to buy new equipment to replace its equipment damaged by hurricane a few years ago, George was instrumental in organizing the fundraising.

The work and fame of Tanny and The Boys is so closely knit that it’s near impossible to separate the contributions of George Violenus and his fellow musicians from each other and the band’s legacy.

At least five of the seven musicians that made up the string band between its founding and the Fête release have died as golden-agers. George’s brother and the group’s signature accordionist Eddie Violenus and marimba player James Roosevelt Samuel are still with us at the time of this writing.

Awards to Tanny and The Boys include the VOICES July 1 certificate of honour and the Caribbean Tourism Organization (CTO) Award of Excellence. George was the sole member able to travel to New York City to receive the CTO award on behalf of the legendary band in 2006.

“The funeral for George was lovely, very colourful,” said VOICES founder and president Nkosazana Illis. Several people at the well-attended service wore a dashiki. The dashiki was often worn by the band members for their St. Martin and international performances. String music was played by a group called Family Stringband, said Illis, who hails from Sucker Garden, the home district of George Violenus.

The funeral service for George Bernard Violenus was held at the Royal Funeral Home & Crematorium, Sucker Garden, on Tuesday, July 26, 2022.