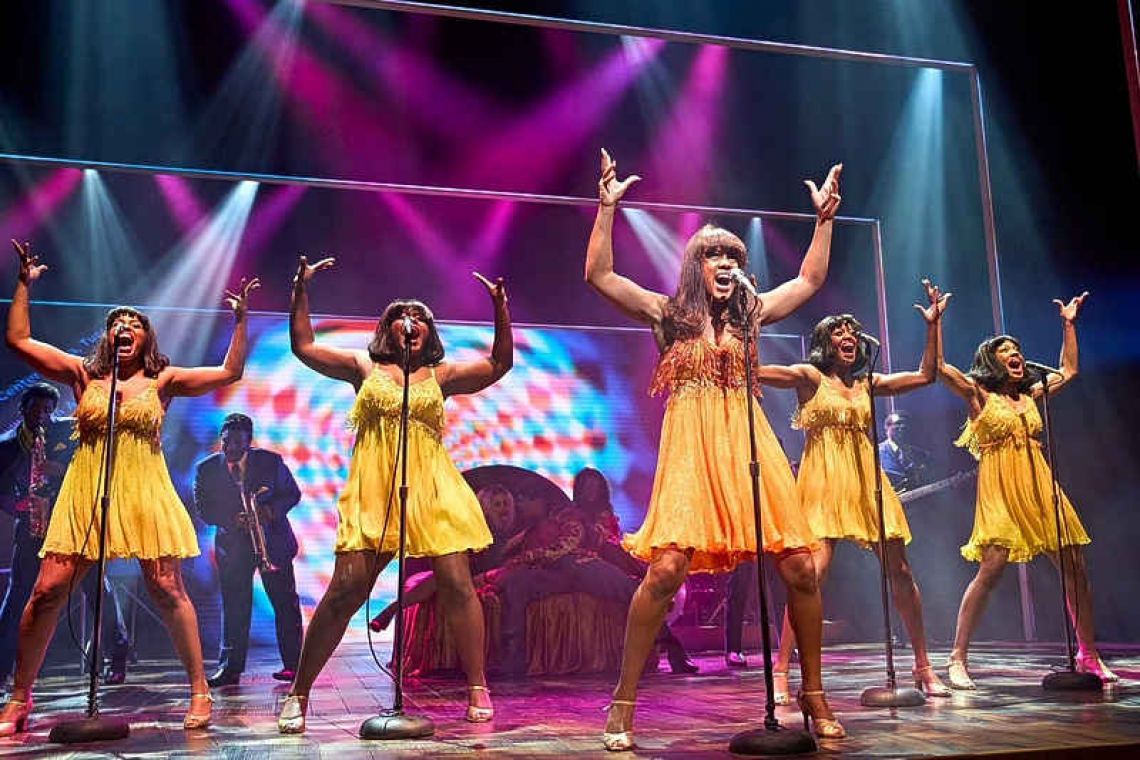 Dreams are coming true for Natorii Illidge, one of St. Maarten’s favourite dancers, who recently made her debut in London’s West End – the equivalent of New York’s Broadway – the highest level of commercial theatre in the world. “I moved to London to elevate my performance career and I am doing it!” she told The Weekender in an interview where she described what she calls her dream job, which she’s worked into existence after much blood, sweat and tears.

Natorii is singing, acting and dancing her heart out eight times a week in “Tina: The Tina Turner Musical”, which debuted on June 29, and will perform here for a year. She’s playing one of the Ikettes – a trio of vocalists known for their high-energy dance routines. She is also a first cover for Gran Georgeanna (GG), Tina’s grandmother; and second cover for Zelma, Tina’s mother. The vastly different roles give Natorii the opportunity to truly explore her singing and acting skills.

The musical “features the music of Tina Turner and depicts her life from her beginnings in Nutbush, Tennessee, to her transformation into a rock’n’ roll star. This musical had its world premiere in April 2018 in London and is currently running in Broadway, Hamburg, Madrid, and Utrecht. I’m proud to be in its fourth year running in London.”

Natorii, who started dancing at the tender age of four with Motiance dance school, is widely recognised on the island, as a performer, dance teacher, and educator. You might have seen her perform in musicals including Annie, The Lion King, Fosse, Chicago, and Hairspray in her younger years. She later moved to Indisu Dance Theater of St. Maarten (DTS), opened by Susha Hien and Ihndhira Richardson-Marlin in 2010, where she was both a student and a teacher. She took part in the Art Saves Lives program by Nicole De Weever, and in 2013 made her way to New York City to study dance at the Broadway Dance Center.

She’s racked up years of experience in dancing professionally, training, teaching, and building her own brand in The USA, The Netherlands, St. Maarten – and also while touring the world with Princess Cruises.

A new venture, voice training, started here with Helen Hart in 2018. A year later, Natorii’s sights were set on her next big move: London. “Although I felt like I was starting over again, this time I started over with a lot of experience,” she recalls. “I networked in the industry and signed with talent agencies to audition for upscale opportunities.”

In October 2020, she pursued a Master’s of the Arts in Musical Theatre Performance at Associated Studios in London. “I was closely mentored by Leontine Hass and Danielle Torento. After successfully completing the course in September 2021, I was auditioning for various musicals, TV commercials, and films.”

It had been a “mental, physical, and emotional challenge juggling work and finding time and the budget to continue auditioning, training my voice and honing my dance technique,” but the best part of living in London is the “abundance of opportunities to learn, build, and grow in my career and personal life.”

The rehearsal process for Tina was incredibly intense, with Natorii at one point having to work over 14 hours a week as the rehearsals overlapped with her performances on the Alan Partridge Arena Tour. Looking back, she says it made her a stronger performer, and she looks forward to the journey continuing.

What projects were you working on before this?

Before the start of the pandemic, I successfully booked two amazing dance contracts in London; James Bond No Time to Die and Thriller Live Tour. I successfully completed the MA course performing in the graduate musical, Hair, and I created and performed a one woman show, Survive to Thrive, for my extended independent study.

March 2022, I finally booked another tour contract from my dance showreel and a vocal self-tape submission. This time around, I performed with the comedian celebrity, Steve Coogan, in his show Alan Partridge Live ‘Stratagem’ Arena tour in the UK and Ireland. It was quite an amazing learning experience. This tour was on a constant move on tour buses as we performed for over 10,000 people in different cities.

I started the Tina Turner Musical audition in March, just a couple weeks before starting rehearsals for the Alan Partridge tour. There were a total of five audition rounds that lasted for four weeks. In this audition process, the talent they needed to see was my singing and harmony skills, my acting skills and my dance performance skills.

My biggest growth in this industry was through the auditioning process. Each audition that I’ve done was all different and I have learnt life lessons from each of them. Almost every single week, I had at least one or two auditions.

What I mostly learned from this process was building my mindset into understanding what’s for me will come at the right time and that I am winning and fulfilling my purpose every day. What I’m most proud of is receiving audition call-backs. Although it feels like it hurts more when you get cut at the final audition recalls, it actually means that you have done exceptionally well, your talent is seen and appreciated, and you’re one step closer to achieving your goals.

Therefore, I had to continuously look at those cuts in this perspective in order to keep going and not give up.

What was it like when you found out you had been selected?

I was on the train going home when my agent called and proudly informed me that the company of Tina sent me an offer. My heart dropped and I wanted to scream out of joy, but I was on the train. I went blank for a moment as my agent described the role I got and the roles I am covering.

As soon as I got off the phone with my agent, I called my mother right away, and shouted “I got Tina in the West End!” I couldn’t believe it. My biggest dream came true. I moved to London to elevate my performance career and I am doing it! For those who are not familiar, the West End in London is equivalent to Broadway in New York. I’m in the highest level of commercial theatre in the world! I wasn’t sure it would have been possible, but I set that high goal anyway!

What can you tell us about the different roles you play?

My Ikette track is completely different to GG’s and Zelma’s track. The Ikette track is very busy, I’m constantly on stage singing, dancing, and doing ensemble parts. The Ikettes are strong, vibrant performers, who are also Tina’s friends and cheerleaders.

GG’s and Zelma’s track plays supporting roles that partake in vital scenes of the show. GG probably has the most important scene with Tina at the start of the show, and then she dies. However, she is an Etherland (ancestor) character throughout the show.

GG took care of Tina when her mother and father left her at the age of 10. She looked after her until she was 16, and then passed away. GG was very nurturing and caring; she encourages Tina to share her gift to the world: her voice.

My experience as GG was an amazing journey. My first time as GG was very magical. I got to shine in my acting and singing abilities. I sang a solo for the first time on a professional stage in the West End. Dreams are coming true!

Preparing and rehearsing for the role of Zelma was a fun challenging experience, as the role has many layers. She has five vital scenes in the show, and she is very complex. Tina’s relationship with her mother had a lot of friction. Tina herself once stated that her mother never believed in her, and she never wanted her. When Tina grew up to be successful and creative, Zelma didn’t accept it because it was something she didn’t want. Zelma never gave Tina credit for her success. As Zelma’s health declined, Tina still cared for her and did not hold a grudge. [This interview took place before Natorii played Zelma on stage.]

What was running through your head at the end of your first performance?

So much was going through my mind. It was the toughest week as we had completed many runs of the show right before our debut that night. Therefore, along with feeling exhausted, my heart was pounding with excitement! I felt blessed to receive many best wishes, cards and flowers. I had only one hour after the dress run to zone out and take deep breaths. I felt so grateful. I said to myself: “You did it. No matter the odds. You did it! You are here!”

After the first performance, my adrenaline was really high. A few people from St. Maarten surprised me at stage door. I was not expecting them to come and see me, so it was such a wonderful surprise. I was overwhelmed with joy and tiredness.

The entire cast was really enthusiastic and supportive of each other. We were all emotional, grateful and excited. It was a West End debut for a few of us, which made the first night extra special.

Anything else you’d love to share with the fan base back home?

I want to extend my gratitude to all of my teachers and mentors (too numerous to mention) who believed in me, trained and guided me. I want to share my deepest gratitude to the Culture Department, Associated Studios, other businesses, and private sector entities for funding my training over the years. I’m also grateful for many artists that I’ve learnt from and crossed paths with.

Thank you to all my family, loved ones, friends, and all the St. Maarten peeps for cheering me on. And last, but not least, I am beyond grateful for my mother who unconditionally loved, cared and supported me through thick and thin all these years.

No matter what, I am driven to fulfil my life with an abundance of knowledge and experiences that will inspire others to have faith, dream bigger, and become the best version of themselves. This is just only the beginning. Although I wish to return to St. Maarten later in the future, I will first continue to grow out here and show St. Maarten that anything is possible once you know your inner purpose and have that fire and passion for it!