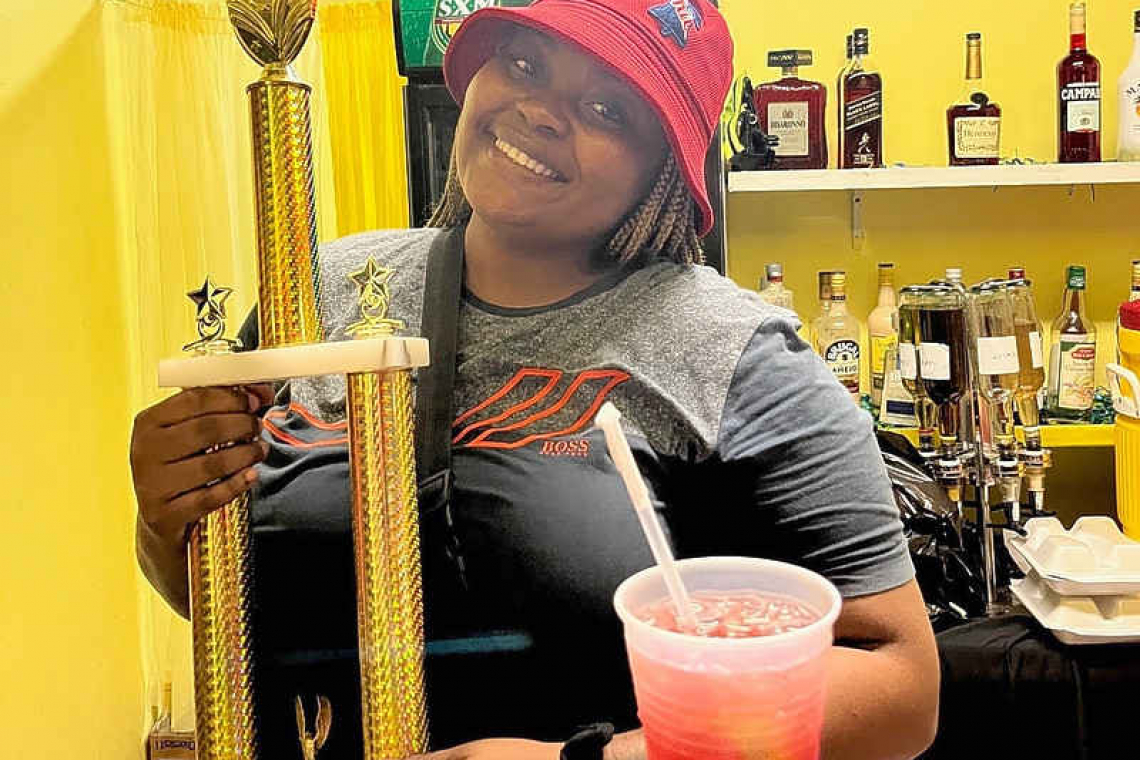 Fellow drink-lovers, unite! Time to quench your thirst in another segment of an island-wide hunt for St. Maarten’s best drink!

The Friendly Island is sometimes also referred to as the “Little Miami of the Caribbean”, so it is high time to put those names to the test to discover where we can get both a friendly chat and a good drink. So, we took the crucial task upon ourselves to go out and about and sample the island’s specialty sips and then to report our findings back to all you thirsty people.

The best part? While we’re at it, we might as well ask the island’s talented bartenders, baristas, and smoothie specialists for their secret recipes so that you at home can try your hand at these special sips!

This week, our scavenger hunt for delicious drinks took us to the Festival Village of course. Here, we met with local bartender Kemani “Silent” Reid to try her prizewinning Sayless drink and to get our hands on the recipe of her popular Twisted Gentleman.

Kenisha is the proud winner of the St. Maarten Carnival Development Foundation’s (SCDF) Cock-up Competition – an annual competition to determine which booth has the best specialty drink. Her Sayless drink wowed the judges and was deemed “Best Drink of Carnival 2022”.

On Bacchanal Sunday, we headed over to booth #32 to learn more about Kenisha and her bartending secrets, her booth and, of course, to try some of their signature carnival drinks so that we can report back to you!

It was Sunday evening at 9:45 and patrons were enjoying local food and drinks in front of Evelle’s Kitchen overlooking the party scene. While we spoke with Kenisha, people came by to order mixed drinks, chicken, Johnny cakes and, of course, Sayless.

Besides making a good drink, the bartender also excels in the kitchen. Evelle’s Kitchen is known for street food, local cuisine, and strong but tasty drinks. During carnival, Kenisha serves up smiles and snacks at booth #32, but Evelle’s Kitchen is open year-round at booth #20 in the village.

Kenisha tells us that her “taste of everything” plate is the most popular dish as it combines shrimp, steak, two types of chicken and fries – a perfect meal before a fete.

Her secret to a great drink? “Simple,” she says. “I like to get people messed up.” That is why all her drinks are creepers. “They sneak up on you,” she explained.

Kenisha has been bartending for over six years she tells us. Her favourite part of being a bartender? The social aspect. She smiles and says that she loves socializing with everybody at the bar.

Of course, we had to put Kenisha’s drinks to the test. It goes without saying that we started the sampling with the prizewinning Sayless drink. Unfortunately, but understandably, Kenisha did not want to share her secret recipe with us. “It’s like the Krabby Patty recipe in Spongebob,” one of her colleagues joked. You’ll just have to head over to booth #32 next time you’re in the village and try it yourself!

The best drink of carnival 2022 was born four months ago. Kenisha served it at Evelle’s Kitchen before carnival but under a different name – the B*tch. Kenisha attributed the drink’s success to its crowd-pleasing and refreshing qualities. It’s not too strong, not too sweet, not too sour, but still packs a punch.

It was good, it became our friends’ drink of choice for the night. When asked for their review of the drink, someone said, “It’s fruity and smooth, and makes you want more.” Another compared its fruitiness to an adult Caprisun – and we are here for it.

Then it was time to try another Kenisha classic– the Twisted Gentleman. This one is more for experienced drinkers, Kenisha says. This is due to its slightly bitter flavour. We have decided to take this as a compliment because we very much liked this drink.

It’s different, flavourful and slightly bitter while still refreshing – perfect for any occasion if you ask us. Like a friend said, “This drink is dangerous” – referring to how relatively little you can taste the alcohol – but who doesn’t love a little danger?

Sprite – depending on how strong you want it

It’s carnival, so Kenisha has to be able to make her drinks quick. Thankfully, this one does not require any complicate instructions. Just add Campari, vodka, club soda and ice in a glass or cup, top off with sprite, throw in some lime and ENJOY!