Professional Beach Volleyball taken to the next level! 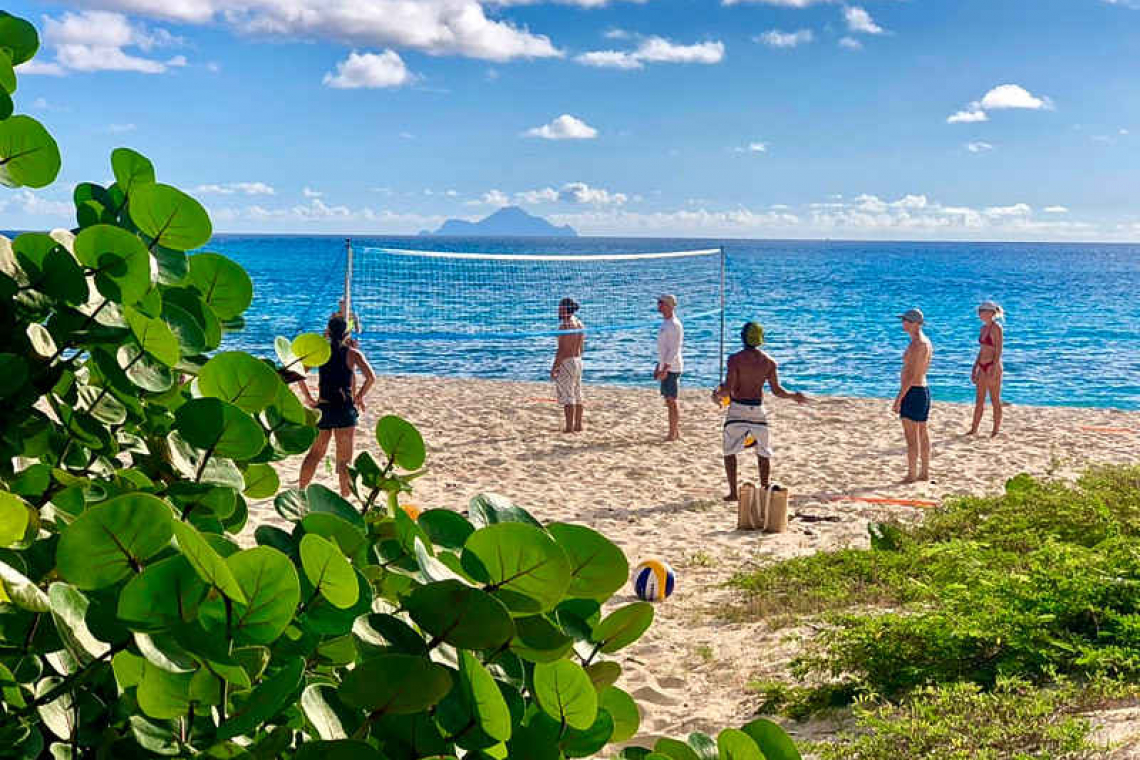 If you’re not familiar with beach volleyball, it’s a team sport played by two teams or two players on a sand court divided by a net. Similar to indoor volleyball, the objective of the game is to send the ball over the net and to ground it on the opponent’s side of the court. Each team works in unison to prevent the opposing team from grounding the ball on their side of the court. Sounds competitive, doesn’t it?

Beach volleyball most likely originated in 1915 on Waikiki Beach in Hawaii, while the modern two-player game originated in Santa Monica, California. On St. Maarten/St. Martin, what many people don’t know is that (beach) volleyball used to be one of the biggest sports on the island, with a massive league tournament being held every year… and various teams, from company teams to teacher teams, all competing at a high level.

This Saturday, Amstel Bright Beer and the St. Maarten Volleyball Association, in partnership with Da Waterhole Beach Bar, will be hosting a professional tournament with 18-20 teams, mixed- and men-categories from intermediate to advanced level. The St. Maarten Volleyball Association is a club that was started by a group of enthusiastic players that met every weekend to play beach volleyball. Headed by David Salomon, the group can be found on Mullet Bay every Saturday at 3:00pm till sundown. This time includes one hour of training geared towards beginners-, intermediate- or advanced-players alike, where anyone can come and improve their beach volleyball skills.

The tournament will showcase some of the best beach volleyball players on the island. Games will consist of two vs two as is customary in beach volleyball, with the pool phase being one game till 21 points and the semi-finals consisting of a best of three. Finalists will receive prizes and medals, and the winner will get the official trophy. Club Founder Salomon mentioned that “the goal of the club is to bring back enthusiasm for the sport and to introduce as many people as possible to it.” He continued, “We have 37 beautiful beaches, most (if not all) of which can be used for fun games. It’s a fun, healthy past-time where the fun often extends beyond the court, into a real community sense which I truly enjoy.”

Amstel Bright is the official and title sponsor of the tournament. The beer brand is born in Curaçao with Dutch roots. It is a popular beer brand in the Dutch Caribbean islands like Aruba and Curaçao. The brand has a strong beach active identity, and maintains a strong presence within the beach tennis community in Aruba. HEINEKEN Brand Manager, Tanvi Goklani, said it’s “important we build the brand through a beach sport that the community relates to.” He said, “Amstel Bright really champions the island attitude – active, spontaneous, social and energized. We are really happy with the collaboration and we can’t wait to have some fun.”

Hosting the tournament will be radio personality Sagan of Laser 101, and six hours of music by DJ STOV3 (Kess Lusia), DJ Big Boss & DJ Maestro. All DJs have an incredible talent to mix music and entertain crowds. As a little snippet, DJ STOV3 has a deep desire to stand out from others, seeking to mix music in a creative way. This is something you should witness for yourself.

Entertainment and tournament will start at 2:00pm and end at sundown with an official after party. Lunch is available via Da Waterhole and special bucker specials on Amstel Bright (+ Heineken)! Registrations are closed, but everyone is invited to come out and enjoy the match and play spectator games, with cool giveaways.