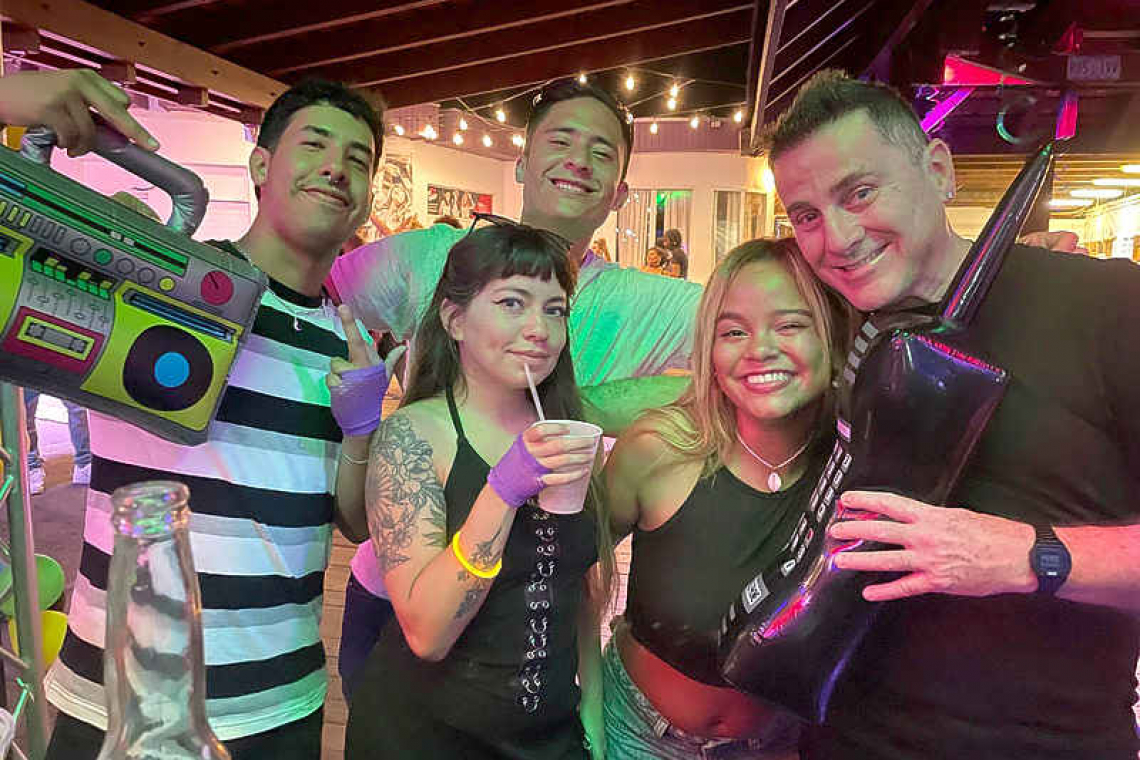 This Saturday, August 13, it’s time to travel back in time. Get ready to dance to your favourite 80’s and 90’s tunes at Soggy Dollar Bar’s Retro Party! We talked to Nachum Frank, aka FrankieBaby, about this not-be-missed event.

The DJ explained that the last “Back to the 80’s” party at Soggy was so crazy that they have been asking to make it a recurrent event. “So the next one is on Saturday August 13, and besides all the 80’s, I will also play the greatest songs from the 90’s.”

The best-dressed people will receive free shots. So now is the time to rock that big hair and dust off those fingerless gloves, colourful tights and animal prints. Or, if you prefer the 90’s, channel your inner Cher from Clueless by wearing a plaid set or be inspired by The Rock’s classic high-waist jeans and black turtleneck combo. But don’t worry; those who don’t like dressing up won’t go thirsty since all mixed drinks are 2-for-1!

FrankieBaby was born in Canada but raised on Curaçao. This is where he bought his first set of two turntables and a small DJ mixer for NAf. 100 in 1979. During his college years in Massachusetts, Frank got into radio and played for large commercial college parties.

After moving back to Curaçao in 1987, he continued to work for radio and joined a popular DJ group. Since 1993, FrankieBaby has been a household name in St. Maarten’s music scene with an impressive list of venues, including Greenhouse, Tantra, La Luna, Sunset, Sopranos and radio stations Laser 101 and X104. Nowadays, he is the resident DJ at Red Piano during their famous “Church on Monday” nights.

Though FrankieBaby is an open format DJ to satisfy the diverse group of people at most parties, he explains that his favourite is going back to the 70’s, 80’s and now 90’s parties.

According to FrankieBaby, the late 70’s, 80’s and early 90’s were an amazing era of music: “Those songs were made with heart and soul (and while on good drugs), which is why they still sound great and keep playing after all these years. Back in that era, a song lasted for a very long time on the radio and at parties, most songs that come out now last for only a few months and then hardly get played again.”

He continued: “That era was also a much happier one for many people, which is why they like to ‘transport’ back to that feeling. The older generations relive, and the new younger generation Shazams all the songs so that they can add them to their playlists … ha-ha-ha ... yeah baby!!! So come out, bring all your friends to have a good time dancing to the greatest music!!!”