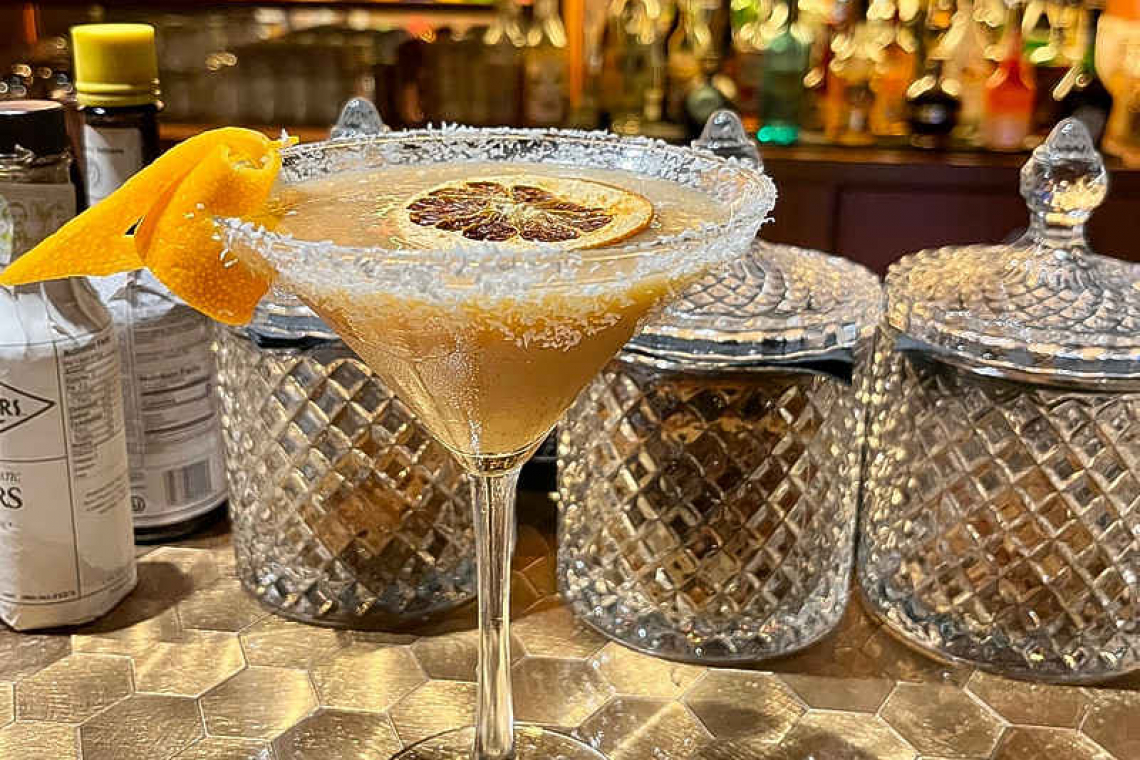 The Friendly Island is sometimes also referred to as the “Little Miami of the Caribbean”, so it is high time to put those names to the test to discover where we can get both a friendly chat and a good drink. We took the crucial task upon ourselves to go out and about and sample the island’s specialty sips and then to report our findings back to all you thirsty people. The best part? While we’re at it, we might as well ask the island’s talented bartenders, baristas, and smoothie specialists for their secret recipes so that you can try your hand at these special sips at home!

This week, our search for the island’s hottest drinks took us to Kingsman in Simpson Bay. We arrived there around 6:00pm on a Thursday, when the cocktail lounge had just opened its doors for another night of refined spirits, craft cocktails, intimate conversations, and overall good vibes. Here, we met with bartender Frank, the experienced yet mysterious mixologist, who prefers to focus on the drinks rather than on his own identity. So, you’ll have to come to Kingsman yourself for a better look at the mystery man’s face and a hint at his surname.

Frank has been in the game for over 21 years. After studying sociology and finishing his military service in Africa, Frank decided it was time for a break before committing to military life. He ended up on St. Maarten through a recommendation from a friend and started his bartending career in Orient Bay in 2001. The now-experienced mixologist had never bartended before then; but at the time, a 20-minute training session sufficed for the simple piña colada, daiquiris, and mojitos that guests ordered.

Frank, however, wanted to learn more about mixology, so he packed his bags and went to London. From 2003 to 2005, he was bartender and sommelier at a Michelin restaurant and a posh jazz and cocktail lounge. When he returned to St. Maarten after his time in London, the piña coladas and mojitos started to bore him. So he left for Europe and worked behind bars at several exclusive establishments in Marbella, Monte Carlo and Switzerland. It was during this time that Frank had the honour of being head bartender at the Prince of Monaco, Albert II’s wedding where he met other royalty members, soccer players and celebrities.

Because Frank did not want to keep his knowledge to himself, he became a fulltime teacher of spirits and cocktails at Mexico’s culinary institute; he has also trained the staff at several luxury hotels in the Caribbean. So when the owners of Kingsman contacted him about a job at the speakeasy inspired cocktail lounge they were planning to open on the island where Frank’s bartending journey got started, he did not hesitate. “I loved the idea, so I came back specifically for this project,” he says.

According to Frank, learning from others is the secret to his success. “I’ve worked with really good bartenders over the years and that really helped grow my experience and creativity. I picked up good things and techniques from them…and personal flair. Some people are good with numbers, others with words, I’m good with drinks.”

Frank’s favourite part of being a bartender? Meeting people. “You meet new people every day and everybody has something to add; you learn something new every day just by talking to them,” said Frank.

Frank likes to ask Kingsman’s patrons what they like: A short or long drink? Bitter, sour, spicy, sweet? Strong or light? “If they don’t like anything on the menu, I will create something special for them.”

He added: “I’ve created so many drinks in my life. I take inspiration from the location. For example, I like to use local products to showcase the destination.” Frank said he also tries to match his drinks to the concept of the establishment. In the case of Kingsman, that means classic cocktails inspired by speakeasies during the prohibition era.

Today, Frank has decided to make us one of the most popular drinks on the menu. His “Guavaberry Stole My Heart” cocktail was inspired by St. Maarten. “I wanted to try something local. Everybody knows guavaberry, but it’s generally only used for shots or guavaberry coladas,” he explained.

That is why Frank created a short drink version in a martini glass. The end result is a sophisticated version of a guavaberry colada: less sweet, more balanced and stronger, yet still tropical and fruity. Try it for yourself!

Use a lime wedge to wet the glass rim before rolling glass in a plate of grated coconut for a coconut rim. Then, combine rums, passion fruit, coconut cream and ice in a shaker – and shake it, baby. Pour mixture over ice in a glass, garnish with orange peel and ENJOY!