Germs – What do they do? Exploring Health with Bamba 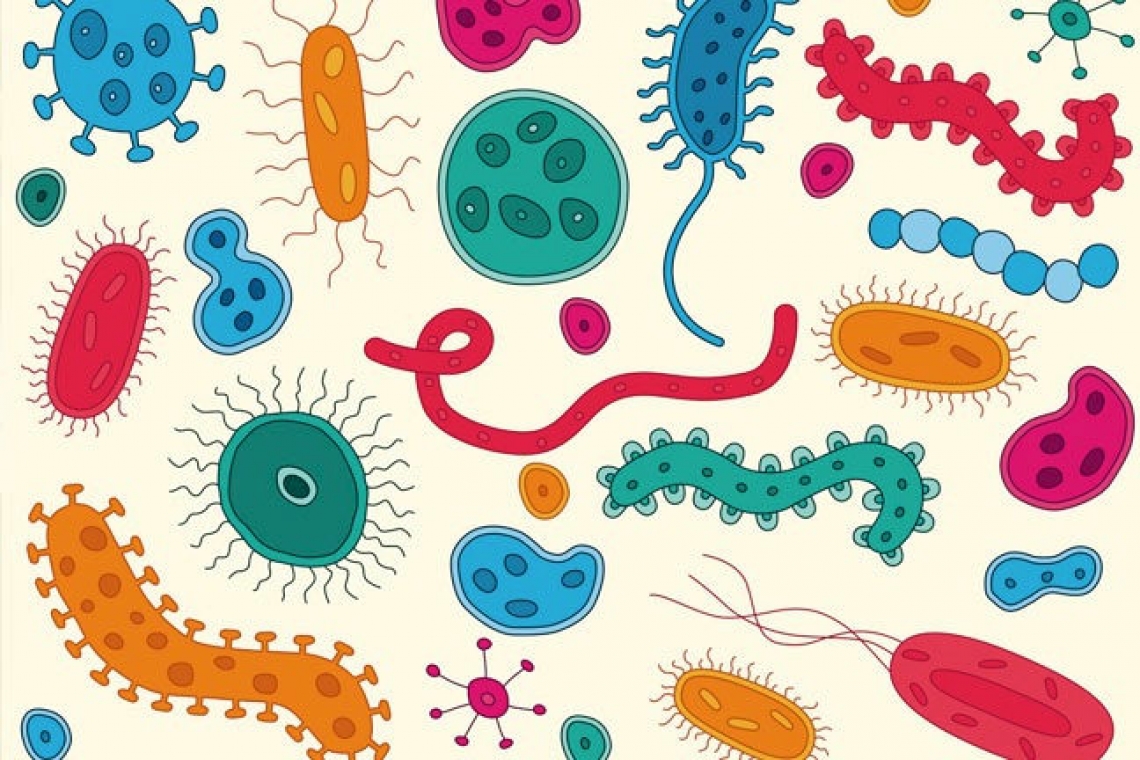 Image: This drawing shows that different types of bacteria in the gut have all sorts of different shapes. Image via University of Minnesota.

Authors: Bamba; Delroy Daley, Medical Student; and Beatriz Finkel-Jimenez, PhD, Associate Professor of Microbiology and Immunology; all from the AUC School of Medicine.

Hi friends! It’s Bamba here! Who would have thought the year 2020 would be this weird? COVID-19 has me wondering about all the different kinds of tiny things that we cannot see that can make us sick. Today, we are going to take a closer look into viruses and their friends, bacteria!

Humans have been around for about five to seven million years. That’s a long time, but not as long as bacteria, though! Did you know that bacteria are the oldest living organisms on the planet? That’s right! Bacteria are ancient.

Experts say bacteria have been present on Earth for about 3.5 billion years. Wow! That’s even before dinosaurs were alive!

What are bacteria? Bacteria are microbes (tiny living things you can only see with a microscope) that are found in the air, water, land, everyday surfaces, and even YOU! Yes, bacteria also live on and inside humans. We often look at bacteria as germs; however, some bacteria help humans in important ways – I like to call those bacteria friends.

Bacteria are made of one cell – the smallest form of life. Bacteria have an outer cell wall to give extra protection, like armour, so they are not easily killed.

Some bacteria also have a slender threadlike structure (called flagellum) to help them swim around in their environment. The good bacteria that live inside humans help break down foods that humans can’t do all on their own like fruits and veggies. It’s sort of like you and the bacteria in your gut are a tag team – cool!

Most bacteria have fuzz (fimbriae) on their cell walls that out allow them to stick to things – this is what the bad bacteria use to stay around long enough to get you sick. You ever blew your nose and saw green or yellowish boogers in the tissue? Yep, you guessed correctly! That was caused by bacteria and that sticky fuzz.

What about viruses? Did you know that viruses are not living things? That’s right! Viruses are not alive. Viruses put their nucleic acid DNA/RNA into the cell’s brain (nucleus). That gives the virus control of your cells so that they can make copies of themselves and spread their disease. Cool, right?!

Sometimes, viruses do not attack right away. They can be dormant (sleep) and wait until the perfect time to wake up and spread their disease. A virus can remain dormant for days, months, or even years!

Some viruses have a head, body, and multiple tails. The head is where the virus’ DNA/RNA is stored. The body helps keep the virus stable and the tails are used to attach to your cells so that it can invade you.

Other viruses have different forms: circular, tubular, and spiral. Inside, they store the DNA/RNA surrounded by an envelope for protection.

These viruses attach to your cells using their sneaky finger-like proteins to hold on to you so they can put their DNA/RNA inside of your cells to take control. Those sneaky creatures! Unlike bacteria, there aren’t any good viruses.

Wow! I did not know learning bacteria and viruses would be this cool! Hmm, I wonder if the first bacteria were as big as a dinosaur or if viruses will evolve into becoming living things one day. Science is such a mystery.

Well, there you have it, friends! Another science adventure in the books! Remember to wash your hands everyone. We don’t want bacteria or those sneaky ninja viruses to make us sick.