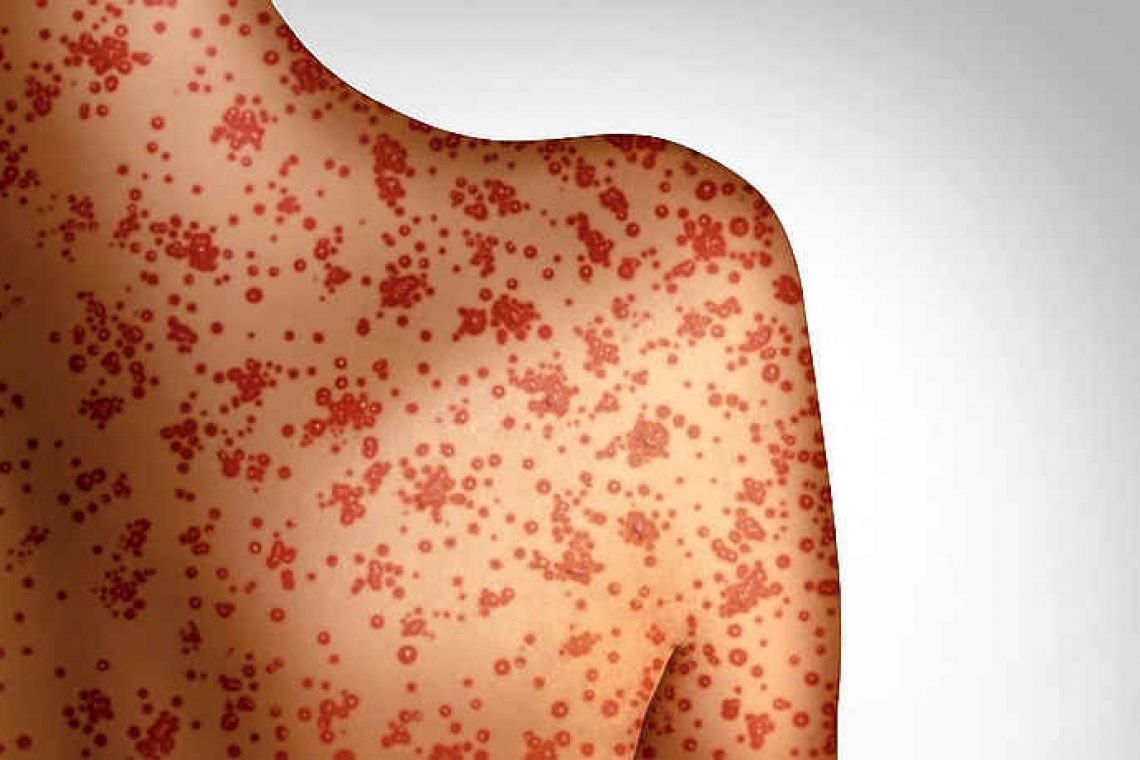 Many years ago in Grenada, a four-year-old girl visited her cousin in the hospital. Twelve days later, she became miserable and feverish; her eyes became inflamed and she developed a red spotty rash. Her mother, a community midwife, prepared a dark space in the back of the house with curtains. There the girl had to stay for 10 days, with regular mango juice. She was told that if she came out, she would become blind. Her wait seemed to last forever, as she recovered from measles.

Measles is a disease of humans. It is airborne and very infectious. Illness starts after quite a long incubation of about 10 days, with a fever and conjunctivitis. Measles viruses spread in the blood and invade the brain where they usually cause severe headache, but can cause convulsions. The conjunctiva and cornea of the eyes too may become damaged. The virus often causes diarrhoea and pneumonia; other organisms can invade too, as the immune system works poorly during the infection. Measles remains a common cause of blindness in children in Africa. This is the reason mothers for many generations put children, including my wife, in darkened rooms. it will also afflict the vulnerable with damaged immune systems, for whom vaccination cannot be a protection.

Measles attacks will find the chinks in our personal immunological armour. The most common of our defects is a shortage of micronutrients, in particular vitamins and antioxidants. You may not think that this includes you! But it is not just those with a strange, post-lockdown diet who may have missed out on these micronutrients. National surveys of US populations last year found inadequate intakes in 45% of the population of vitamin A; 46% of vitamin C, and 95% of vitamin D. This means that without vaccination, this virus can attack many in a community. It also means that mango juice is an excellent support for a child with measles as it contains high levels of vitamin A in particular.

Colonists originally spread measles to many unexposed populations, as in the Honduras, Cuba and Hawaii where it caused deaths and cultural destruction over subsequent centuries. Before widespread human vaccination in the 1980s, measles killed 12,000 annually in the Americas, and 2.6 million people globally – mostly children. As with smallpox, polio and rubella, measles was eradicated first in the Caribbean region.

Measles is a morbillivirus; its ancestor was the cattle plague, rinderpest. Also known as steppe murrain, rinderpest initially spread from domesticated aurochs in central Asia. This panzootic destroyed domesticated and wild animals over many centuries – a devastating disease to the animals and those that depended on them. Rinderpest was finally declared to have been eliminated in 2011 after innumerable campaigns of isolation, slaughter and vaccination. In its turn, post colonization measles gave rise to another devastating morbillivirus in South America – canine distemper. This can kill dogs, bears, large cats, seals and primates. Dog owners in St. Martin will know that a vaccine is recommended for all dogs to protect them from this infection.

Measles infections are notified to health officials in most countries because it is so infectious. Measles has many variants (just like covid-19, influenza or dengue) which allow outbreaks to be traced. Vaccination has been successful in eliminating the illness from North America and much of the Caribbean. Current measles vaccines contain a measles virus that is safe and no longer an aggressive invader. This allows your immune system to develop its defences against the range of wild types of measles. Measles vaccination started early in the eighteenth century. A Scotsman, Francis Home, copied the smallpox variolation process, scratching blood, or nasal secretions, from infected children into those he wished to protect. This never became popular as many treated in this way developed measles – the virus needed to be attenuated in order to create a safe vaccine. Vaccination would also reduce the prospects of further mutation into other nasty pathogens.

Measles infections persist – in Sicily, low levels of vaccination mean that measles continues to cause hospital admissions, severe illness and deaths in children. Intermittent outbreaks in Venezuela in 2018 were controlled by concerted vaccination strategies by the Pan American Health Organisation, with local and international partners. The Covid-19 pandemic has hampered routine vaccinations: outbreaks are probable this year in Africa, Madagascar and South America.

To keep morbilliviruses and other pathogens at bay, to protect our children and communities, vaccination against measles needs to include everyone. We require better vaccines too against veterinarian morbilliviruses like distemper, to make very sure they cannot jump the species barrier back to humans. In the short term, strengthening our very special immunological armours, individually and collectively, may need improved nutrition.