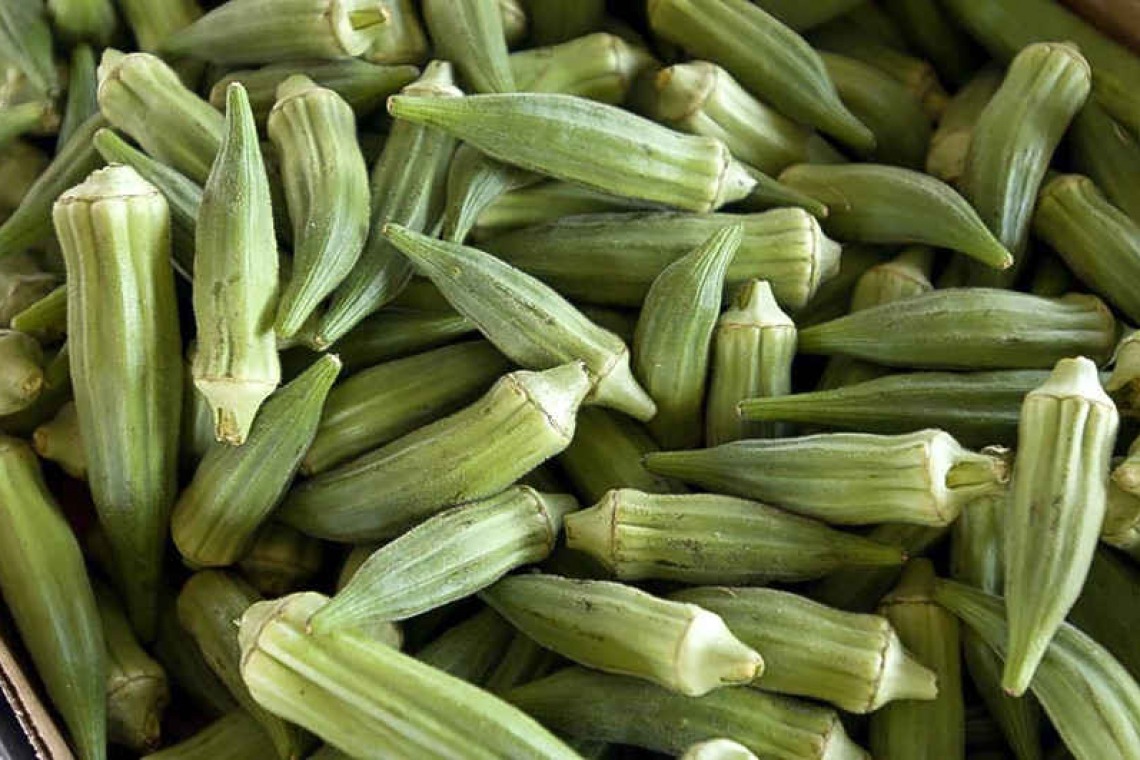 I found a calm

A rinsing off of history too grimy

A washing away of memories not fit for sleep

Okra is a fruit whose special alchemy is attracting researchers. We usually cook okra like a vegetable, or use it in a stew. For many infants it is one of their first solid foods. Many cultures gather to enjoy a callaloo, a Cajun gumbo pot, bamieh doughnuts or bhindi masala. Whether raw in a salad with its leaves, stewed, fried, roasted, pickled, battered or preserved, okra’s nutritional value is high – greater than tomato or aubergines. Lady fingers deliver protein, essential amino acids, minerals, vitamins, antioxidants, flavonoids, fibre and minerals. The poetry of its many names betrays extensive and ancient culinary roots: okro, ochroes, okree, nkruma, delele, derere, kingumbo, quillobo, quingumbo, bamieh, bhindi, bendi.

Okra is a mallow; its cousins include hibiscus, baobab, kola nut, cacao and cottons. In the 13th century a Moorish botanist, Ahmad bin Muhammad bin Mufarrij bin Abdillah, declared okra as having “little nutritional value”.  He was so wrong! Most mallows are mostly edible. Their roots can be used as a substitute for egg-white, for instance in marshmallows. Artists use this same material in the manufacture of smooth paper (sizing), for gilding, or glues. Mallow leaves contain almost double the protein level of spinach or kale, which has made them useful as a famine crop on many occasions through history. Leaves from bush okra or jute, Jew’s mallow or nyenje, are used to make soups such as Molokhia or Ewedu. Flour made from okra seeds can be used to enrich cereal-based diets by adding protein, oils and micronutrients. Roasted okra seeds make a good caffeine-free coffee substitute.

Okra plants are widely treasured as a food source in Africa. Botanically, there are over 2,000 types of Abelmoschus or Hibiscus esculentis. Cultivars used in the United States give a clue to their history, including Jambalaya, Grandma Edna’s Cherokee Long Pod and Choppee. One cultivar, Emerald, was developed specifically by a commercial soup company. And it is not just the fruit pods that are important – okra stems are used as a source of fibres including hessian, burlap or gunny cloth.

Okra in many recipes has a slimy texture. Some folk really dislike it! This gloopy gooiness or mucilage, is a source of treasures – even if you hate this sensation in your soup. Okra plants make long, large branched chains – polymers – of carbohydrates. These work like jungle vines, fishing nets or loose carpets. These trap water, oils, vitamins or spices in their tangles. Such polymers change how foods feel in your mouth. Their caged nutrients or spices are released slowly, influencing the flavours in your gumbo. Similar polymers or pectin’s can be found in plantain, bananas or citrus peel. They can be used creatively by chefs for savouries or sweets. By heating or cooling, adding acidic or calcium-containing foods, these tangled nets can be made to set jams, jellies, aspics or other wobbly desserts. And yes, you guessed it! Okra mucilages are useful in ice-creams and bakery products, especially when deep frozen, because they make ice crystals smaller, preserving a confection in creamy shape. Possibly even more importantly, to some, they are used in the preparation of chocolate. Molecular nets allow okra to be spun into fine, edible films to protect soft foods such as shellfish, so they are beginning to show in supermarkets outside the vegetable counter.

Applications of okra in traditional medicine practices reflect the powers of slippery molecules. Boiled okra may be a reasonable hair conditioner. It works as a poultice to relieve skin problems such as insect bites, sunburn or fungal infections. Okra eyepatches kill Demodex parasitic mites that can inflame sweat glands of the eyelids. Okra’s polymeric tangled nets resist stomach enzymes and acid. They additionally block the binding of inflammatory Helicobacter pylorii bacteria, treating indigestion and stomach damage. Further down the gut, they limit the absorption of glucose and lipids. They may reduce cholesterol levels and blood sugars – a grail for all of us. They interact with gut microorganisms with beneficial effects. By trapping water within the bowel okra reduces constipation. This trapping skill has been employed by pharmacists who have developed slow-release medicinal tablets based on okra polymers. This is a great boon to all of us in reducing the numbers of treatments we need to remember – one pill once a day, rather than one with every meal!