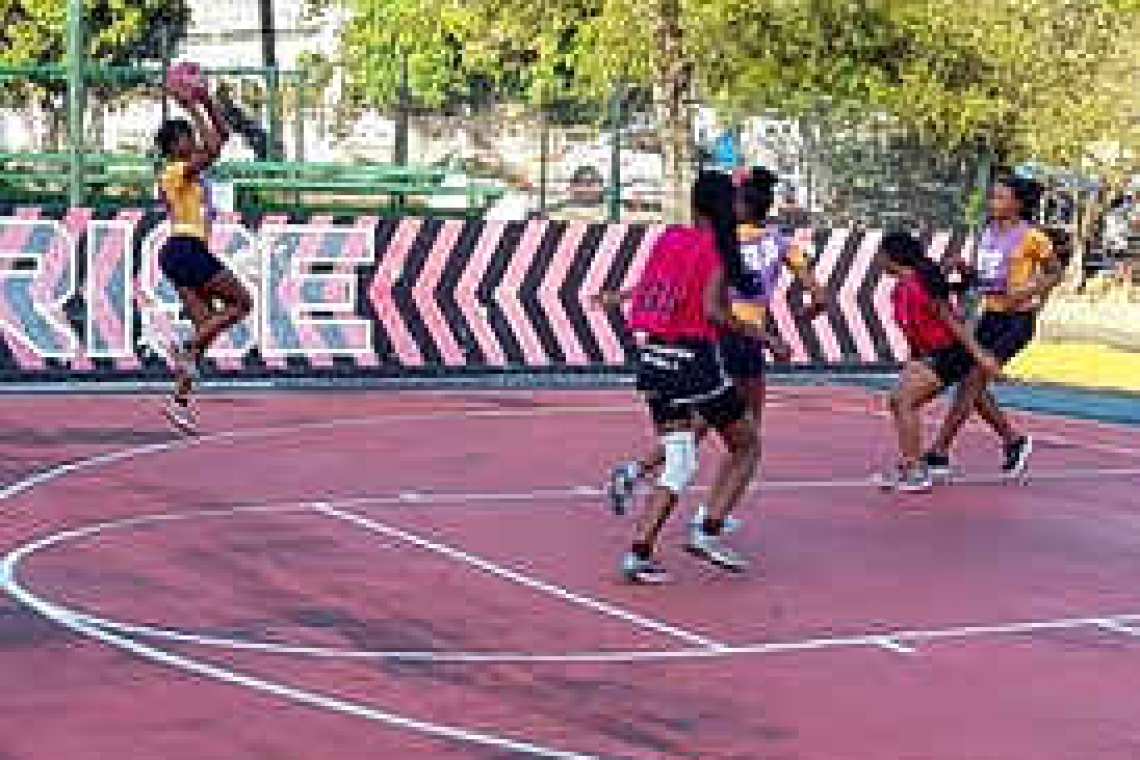 ST. PETERS—Cay Hill, Dutch Quarter and Middle Region all won their matches in the Netball Community League at the St. Peters Basketball Court Sunday.
Simpson Bay 11 – Cayhill 19
In the first match of the day Simpson Bay played against Cayhill. Cayhill was looking for their first win, while Simpson Bay was hoping to go for their second win of the tournament. Both teams started out slow feeling out each other. By halftime the score was 9-8 for Cayhill.
The score was too close for Cayhill’s coach and she decided to make a tactical change to start the 3rd quarter. This worked well as Cayhill pulled away from Simpson Bay by scoring 10-3 in the second half winning the match 19-11. For Cayhill Azareah Bontiff scored 12 points and Kalissa Etinof scored 7. Simpson Bay’s Melissa Hardy scored 9 points and Liana Brown scored 2.

St. Peters 18 – Dutch Quarter 25
In the 2nd matchup both St. Peters and Dutch Quarter came out looking for their 2nd win. By halftime the score was still close with Dutch Quarter in front 10-6. At the start of the 3rd Quarter St. Peters switched Natasha Busby from Goal defense to Goal Shooter which helped St. Peters cutting the lead of Dutch Quarter by 2 by the end of the 3rd.
Dutch Quarter wasn’t having none of that, and after huddling together in the break between 3rd and 4th Quarter came out with their shooting skills by scoring 12 goals in the 4th quarter to seal the win 25 – 18. Dutch Quarter’s Tikeha Bourne scored 16 and Leann Ford 9 points. In a valiant effort but in a losing cause St. Peters’s Natasha Busby scored 12 points while her team mates Shervanna Diedrick and Ailiana Scafe scored respectively 5 and 1 points.

Cole Bay 0 – Middle Region 13
In the last match of the day and in very low lighting conditions due to the match starting after the sun setting Cole Bay and Middle Region met. Both teams were hungry for their 1st win of the tournament. Middle Region came with a very tight defense shutting down every effort to score by Cole Bay. Due to lighting conditions the score by Middle Region was kept to 13 which was more than enough to comfortably win the match. Ariel Goberdhan and Ashley Lake combined to scored respectively 10 and 3 points.
After two match days Dutch Quarter is in first place with two wins 10 points followed by 4 teams with 1 win and 1 loss with 7 points each. Based on the points ratio Simpson Bay is in 2nd place followed by St. Peters, Middle Region and Cayhill. Cole Bay is last position with two losses and 2 points.
The competition will continue Sunday.