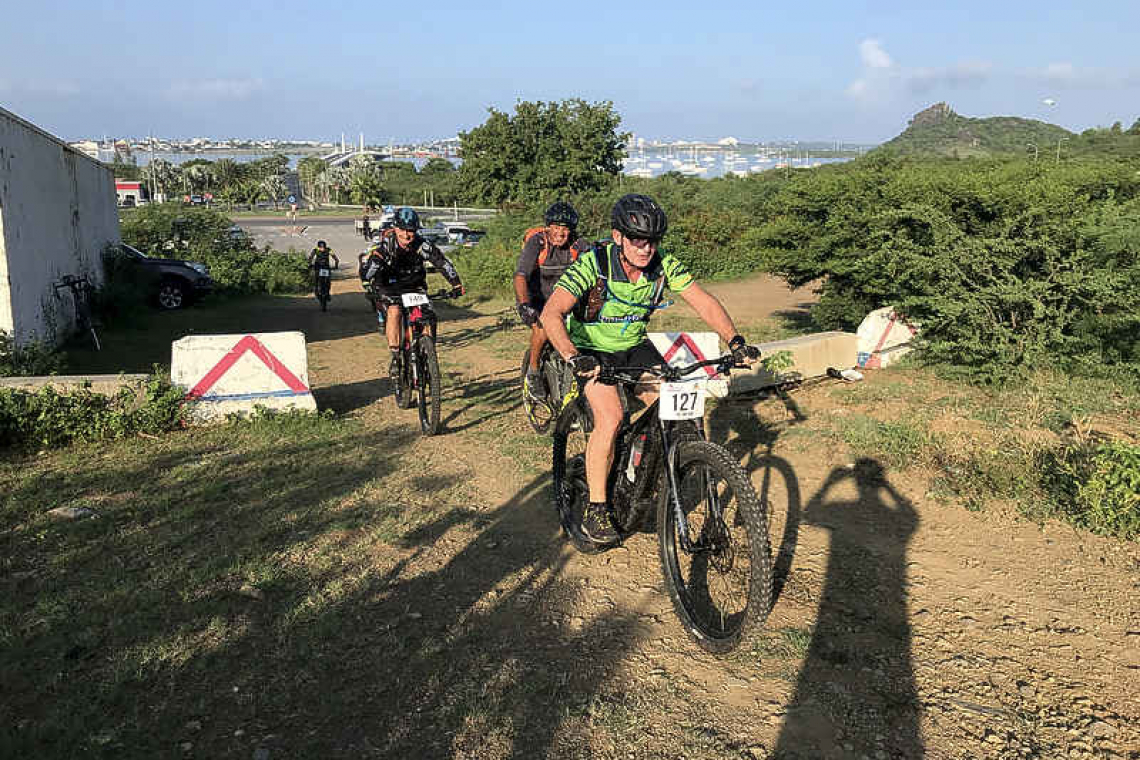 SIMPSON BAY—If anyone needing reminding about how much the planet is heating up, Sunday’s Vizzy SXM Extreme Duo mountain bike race left no doubts. Considered the hottest Extreme Duo race since the event began in 2013, amazingly all seventeen teams and 34 riders finished the 50K on-road off-road course. No rescues for heat exhaustion, fainting, or other medical emergencies.

The hot shot youth team of Andy Guibreteau and Kianny Noel clocked the fastest time of 2:38:17 followed by Mark Maidwell and Otis “Oats” Paines in second place (2:44:16) and in third place Nico Warme and Jeannot Govin (3:14:49).
The power assisted E-bike category saw four teams competing. Clement Pascal and Julien Renard had the fastest time of the day with 2:20:49 followed closely behind by Daniel Vuillez Sermite and Yann Ballerin in 2:35:11.
The first mixed team went to Andy Armongon and Céline Verdonck finishing in 3:37:29. Veteran multi-sportsman Frits Bus teamed up with Murielle Lancien Paul, the pair finishing in 4: 14:28. It was the first time Murielle was riding mountain bike, with just a couple of days practice beforehand.
Also, first time on mountain bikes were Dream of Trails team Germain Thomas and Felix Girier-Durfournier who finished in 5: 08:13 but the duo enjoyed the race immensely.
Karl Spijker was left to ride solo after usual partner Dick Luttekes could not make it back to the island in time for the race but despite not qualifying finished in a super-fast time of 2:45:42. E-bike team Luc Scheulen and Pablo Marroquin did not qualify in the results either despite a second-best time of 2: 25:04 as rules only allow one battery for the entire race.
The race was made possible by Vizzy, Point com, Red Bull, Karakter, Tropical Shipping, Tri Sport and Mad Design.
Susy Piscione from St. Maarten Cycling Federation said next year the race will be moved to a cooler time in November or December. Complete results are on the tri sport website.