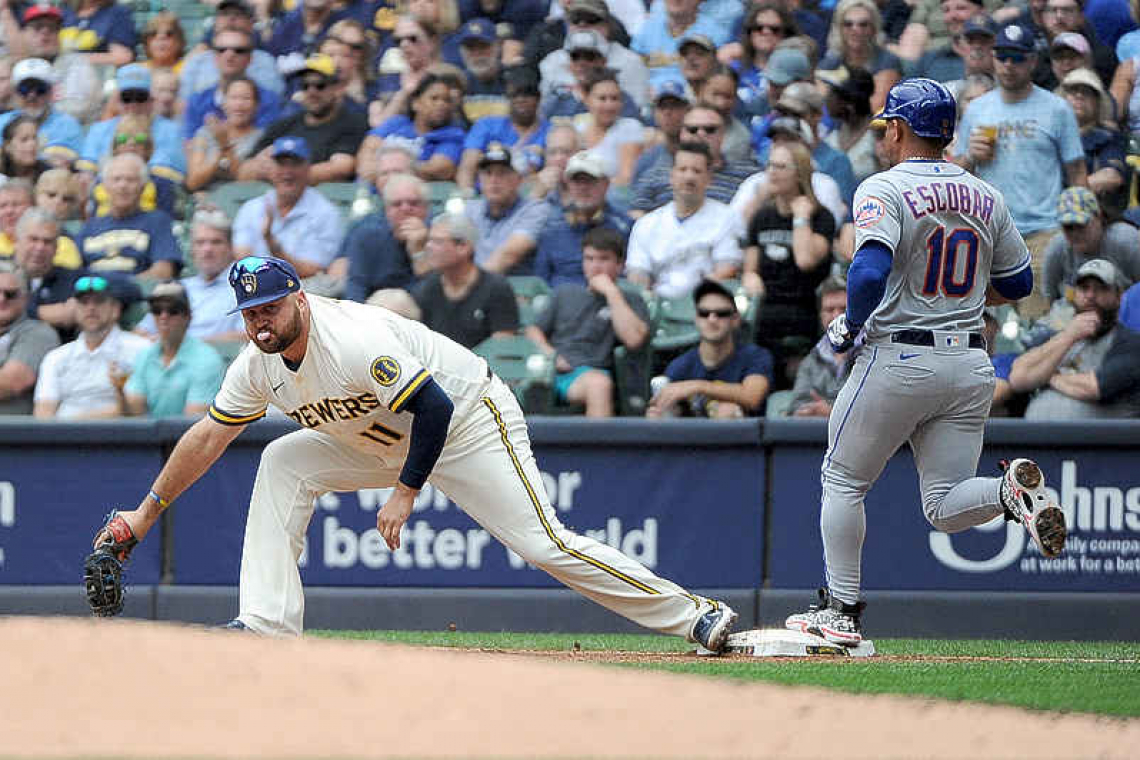 MILWAUKEE --Mike Brosseau's pinch-hit grand slam capped a five-run seventh inning Wednesday afternoon for the host Milwaukee Brewers, who avoided being swept by beating the New York Mets 6-0 in the finale of a three-game set.

The Brewers (79-70), who are now two games behind the Philadelphia Phillies in the race for the third and final National League wild-card spot, improved to 10-10 this month. The Phillies were scheduled to host the Toronto Blue Jays later Wednesday.
The Mets (95-56) missed a chance to expand their NL East lead to two games over the Atlanta Braves (93-56), who fell to the Washington Nationals, 3-2, earlier Wednesday.
The teams were locked in a scoreless duel until the sixth, when Willy Adames led off the home half of the inning by homering off Mets starter Taijuan Walker (12-5).
The Brewers chased Walker before he could record an out in the seventh, when Jace Peterson drew a leadoff walk, went to third on Victor Caratini's single and scored on Tyrone Taylor's single.
David Peterson entered and got two quick outs -- via a bunt by Garrett Mitchell and a strikeout of Christian Yelich -- before he intentionally walked Adames. With the right-handed hitting Brosseau announced as the pinch-hitter for the left-handed hitting Rowdy Tellez, Mets manager Buck Showalter pulled the southpaw Peterson for right-hander Drew Smith, who was activated from the injured list Tuesday and hadn't appeared in the bigs since July 24.
Smith got ahead of Brosseau 0-2 before Brosseau homered beyond the left field wall and a leaping Jeff McNeil. It was the first career grand slam for Brosseau.
Mitchell was the lone player on either team with two hits.
Trevor Gott (3-2), the third of six Brewers pitchers, tossed a hitless sixth inning. The Mets didn't get a hit over the final four innings against four relievers.
Milwaukee starter Adrian Houser allowed three hits without issuing a walk or recording a strikeout over 4 2/3 innings.
Walker was charged with four runs on six hits and three walks with three strikeouts.