For Brittney Griner, months as Russian prisoner end on tarmac 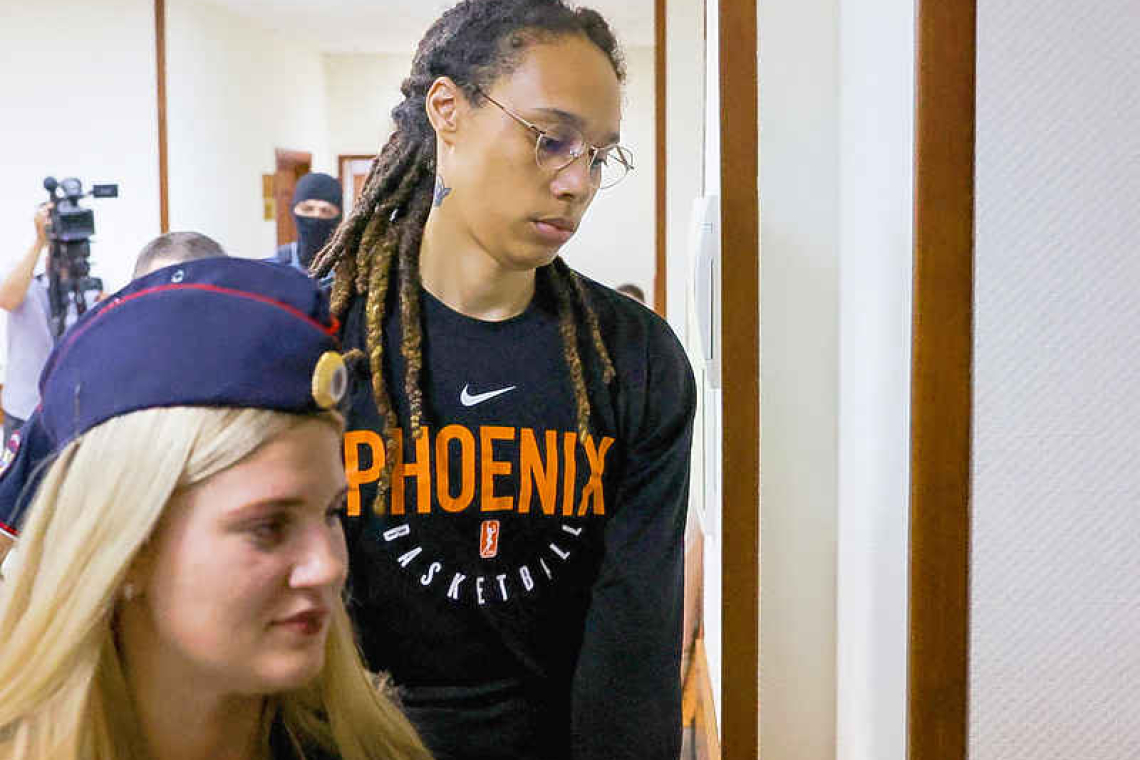 WASHINGTON-- After months of painstaking negotiations with Moscow, it became clear to President Joe Biden's administration that it faced a grave choice - to exchange notorious Russian arms dealer Viktor Bout for U.S. basketball star Brittney Griner or else get no American to bring home.

Thursday's prisoner swap, approved personally by Biden, came together in the past 48 hours, U.S. officials said, sending Griner from a Russian penal colony to Moscow and then to an airport in the United Arab Emirates.
Excluded from the deal was another high-profile U.S. detainee, Paul Whelan, who told CNN by phone that he was "greatly disappointed" more had not been done to secure his release.
Griner arrived in the UAE capital of Abu Dhabi by private plane from Moscow as Bout was flown in on a private plane from Washington.
The two could be seen, in a video released by Russia's TASS news agency, being escorted past each other on the tarmac on the way to planes that would fly them home. Griner, dressed in a red jacket and dark trousers, had her back to the camera. Bout, nicknamed the "merchant of death," embraced a Russian official who greeted him and smiled broadly as he was led away.
Griner’s brutal 10 months in captivity ended after months of fruitless negotiations between the United States and Russia, complicated by Russia's invasion of Ukraine and the souring of U.S.-Russia relations to the worst level since the Cold War.
Biden personally tracked the negotiations closely but it was only in recent weeks that he made the "very painful" decision to provide clemency to Bout to get the swap done, a senior U.S. official said.
A joint UAE-Saudi statement said the UAE president and Saudi crown prince led mediation efforts that secured Griner's release. But White House press secretary Karine Jean-Pierre refuted the notion of any mediation role, and U.S. officials expressed gratitude only for the UAE providing "an important transit site to facilitate the exchange."
U.S. officials had been pressing for the release of both Griner and Whelan, a former U.S. Marine held on what Washington called "sham" espionage charges, and had proposed multiple options that would have included him in a prisoner exchange, a Biden administration official said.
But Moscow, the official said, insisted on treating Whelan's case differently.
"This was not a choice of which American to bring home," U.S. Secretary of State Antony Blinken said at a news conference with the foreign ministers of Sweden and Finland. "The choice was one or none."

Sensitive Negotiations
While the exact contours of the final negotiations were unclear, Russian Foreign Minister Sergei Lavrov said a week ago that discussions with Washington about potential prisoner exchanges were being conducted by the two countries' intelligence services, and that he hoped they would be successful.
CIA Director William Burns and Russian foreign intelligence chief Sergei Naryshkin held talks in Turkey in November - the first publicly announced face-to-face meeting between top officials of the two countries since Russia invaded Ukraine in February.
U.S. officials said they focused mostly on nuclear weapons-related issues but that Burns also raised the cases of U.S. detainees in Russia. It was unclear, however, whether any progress was made on the issue at the time.
A high-level source in the Gulf said the UAE was trusted by both parties and "really helped facilitate the exchange," adding that Putin and UAE President Sheikh Mohammed bin Zayed al-Nahyan likely discussed it in their phone call on Wednesday.
Describing Griner's ordeal as months of "hell," Biden said he had spoken with her and she would be back in the United States within 24 hours.
Griner, 32, a star of the Women's National Basketball Association's Phoenix Mercury, was arrested on Feb. 17 at an airport outside Moscow for carrying vape cartridges containing hashish oil in her luggage.
She was subsequently convicted of drug smuggling and transferred to one of Russia's most feared penal colonies, where former inmates have described torture, harsh beatings and slave labor conditions.
Griner was exchanged for Bout, a onetime Russian weapons dealer who had been convicted in the United States and imprisoned for 10 years.
During the prisoner swap, Griner was met on the tarmac in UAE by chief U.S. hostage negotiator Roger Carstens. She was "all smiles and extremely grateful for all the efforts both USG (U.S. government) and outside the government that has been put on to get her home," a U.S. official said.
The swap leaves Whelan still in Russian custody, a situation his family called a "catastrophe." But U.S. officials insisted he would not be forgotten and they were continuing efforts to secure his release.
"The negotiations ... focused on getting both Americans held wrongfully detained in Russia home," a U.S. official said. "Ultimately ... it became clear that the choice was, as I've emphasized, that it was bringing Brittney Griner home right now or bringing no American home right now."