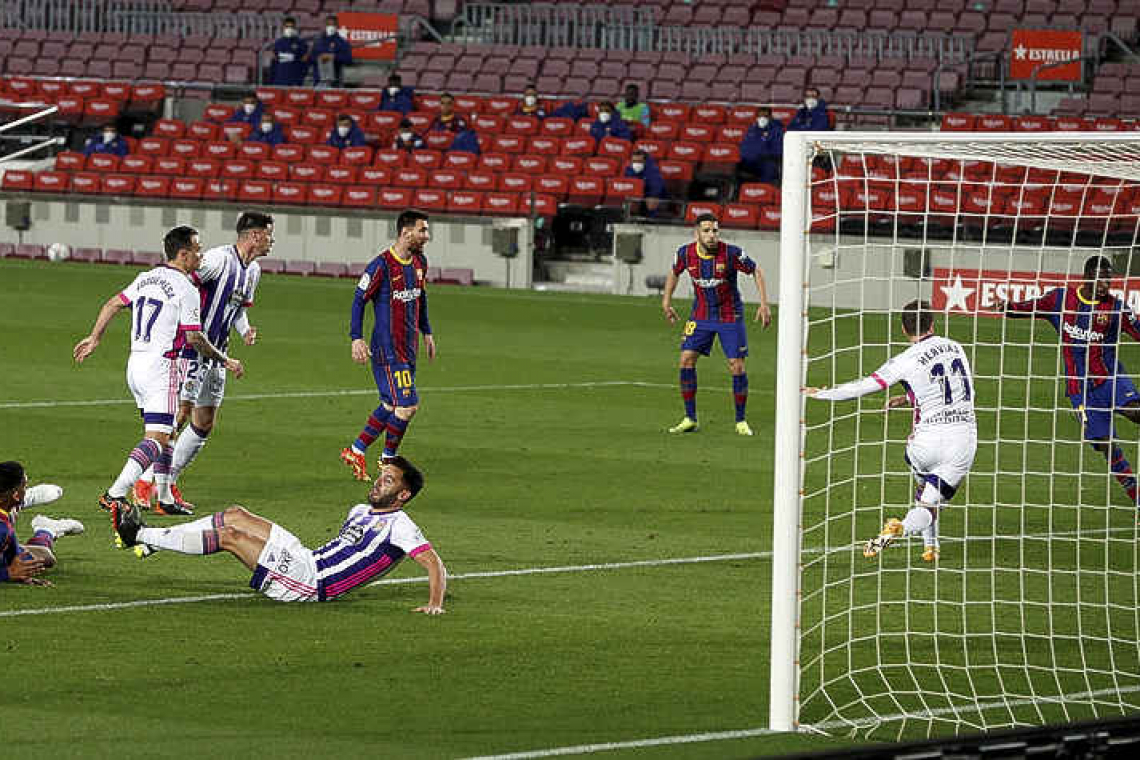 BARCELONA- - Barcelona forward Ousmane Dembele struck in stoppage time to snatch a vital 1-0 win at home to Real Valladolid in La Liga on Monday to pull his side one point behind leaders Atletico Madrid.

Valladolid produced a disciplined yet bold performance and could have taken an early lead when Kenan Kodro headed against the bar, while Roque Mesa had two clear sights at goal from outside the box but failed to hit the target each time.
Barcelona came close to scoring right before halftime when their former goalkeeper Jordi Masip palmed a strike from Pedri on to the post.
The keeper thwarted Dembele in the second half and then watched on in relief as Antoine Griezmann headed the rebound just wide.
The Catalans were dealt a helping hand when Valladolid's Oscar Plano was shown a straight red card in the 79th minute for a tackle from behind on Dembele.
The sending off was fiercely protested by the visitors, who had appealed for a penalty earlier in the second half when the ball struck the hand of Barcelona defender Jordi Alba. However, the referee decided the handball was accidental after a VAR review.
Barcelona finally took advantage of having an extra man when French forward Dembele caught a loose ball in the air with his left foot, slamming it inside the near post.
A sixth consecutive league win for Ronald Koeman's side took them back into second place and moved them on to 65 points, two above third-placed Real Madrid and one behind Atletico, who were beaten 1-0 at Sevilla on Sunday.
"This shows how difficult this league is and that we'll have to really fight in every game to win it," said Barcelona defender Clement Lenglet.
"We faced a great side who played out of their skin, it was a really difficult game for us but an important victory. This run is all down to hard work, things weren't clicking for us earlier in the season but now they are."
Valladolid keeper Masip said his side left the Camp Nou "with a bittersweet taste", feeling pleased with their performance but aggrieved at not earning a point, especially after having Plano sent off.
"It's a real shame that all that hard work was thrown away because of a one-off incident," he added.