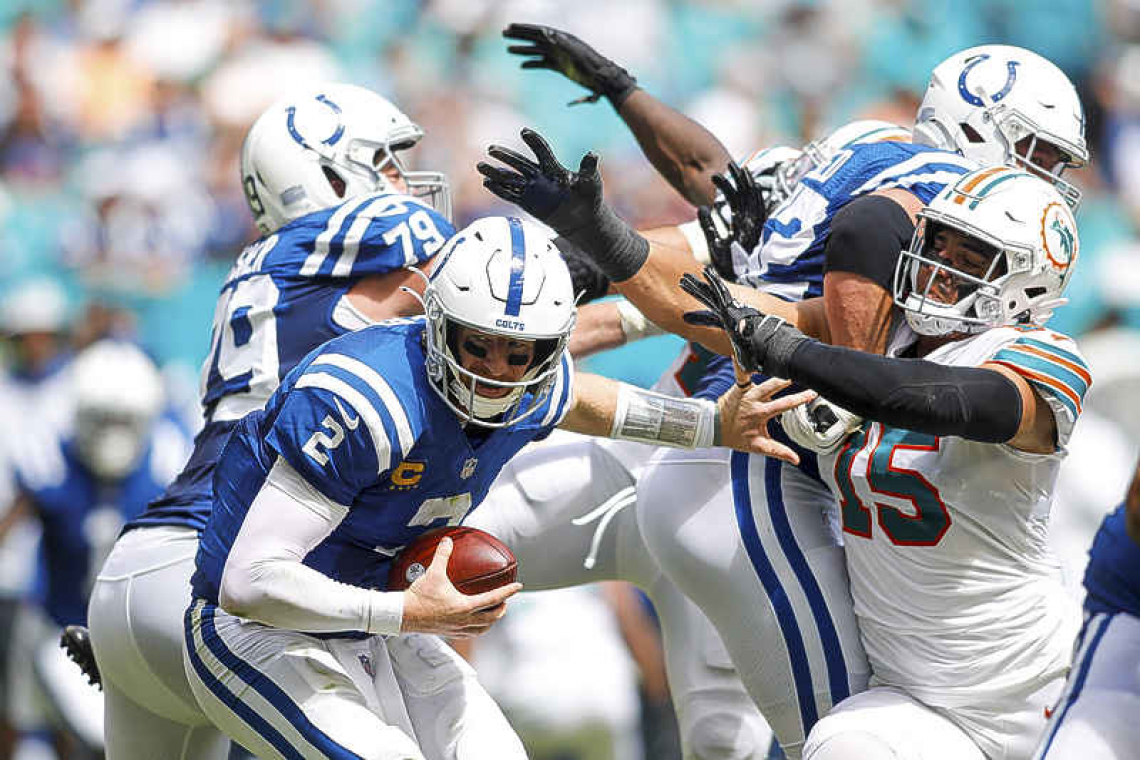 FLORIDA--Carson Wentz passed for 228 yards and two touchdowns, breaking his personal seven-game losing streak and leading his Indianapolis Colts to a 27-17 win over the host Miami Dolphins on Sunday afternoon.

Tight end Mo Alie-Cox caught both of Wentz's touchdown passes and Jonathan Taylor added 103 rushing yards and one touchdown for the Colts (1-3).
Miami (1-3) lost its third straight game.
Wentz, playing with two injured ankles, won his first start since Nov. 1, 2020, when he was with the Philadelphia Eagles.
Dolphins quarterback Jacoby Brissett, starting in place of injured Tua Tagovailoa for the second straight week, passed for 199 yards and two touchdowns. He lost one fumble.
Both of Brissett's TD passes came in the final quarter and on fourth down.
Miami had the only first-quarter score on Jason Sanders' 38-yard field goal. That was set up by Nyheim Hines' fumble on a punt return, recovered by long snapper Blake Ferguson.
The Colts, who gained just 4 yards in the first quarter, took a 7-3 lead with 2:47 left in the second on Taylor's 23-yard run toward the left pylon. That capped a 10-play, 80-yard drive that had nearly stopped. However, the Colts -- after punting from their own 40 -- got a first down when Miami was called offsides.
Miami had minus-7 yards in the second quarter.
The Colts took the second-half kickoff and drove 84 yards in 11 plays, scoring on third-and-goal from the 3-yard line. Wentz rolled to his right and hit Alie-Cox, who was wide open for a 14-3 lead.
Indianapolis then seized on two Dolphins mistakes: a punt return fumble by Jakeem Grant recovered by Ashton Dulin and a Brissett strip-sack fumble forced by defensive tackle Grover Stewart and recovered by linebacker Darius Leonard.
That led to a pair of Rodrigo Blankenship field goals (34 and 43 yards) and a 20-3 Colts lead with 13:22 left in the fourth.
Miami scored on Brissett's fourth-and-goal 1-yard pass to tight end Mike Gesicki, cutting the Dolphins' deficit to 20-10 with 10:40 left. Gesicki, playing on his 26th birthday, caught the ball as he stumbled into the end zone.
But the Colts answered with Wentz's 11-yard TD pass to Alie-Cox, who hauled down a high throw on third-and-goal for a 27-10 lead with 6:15 left.
Miami closed the scoring with Brissett's 3-yard TD pass to DeVante Parker with 4:24 remaining.