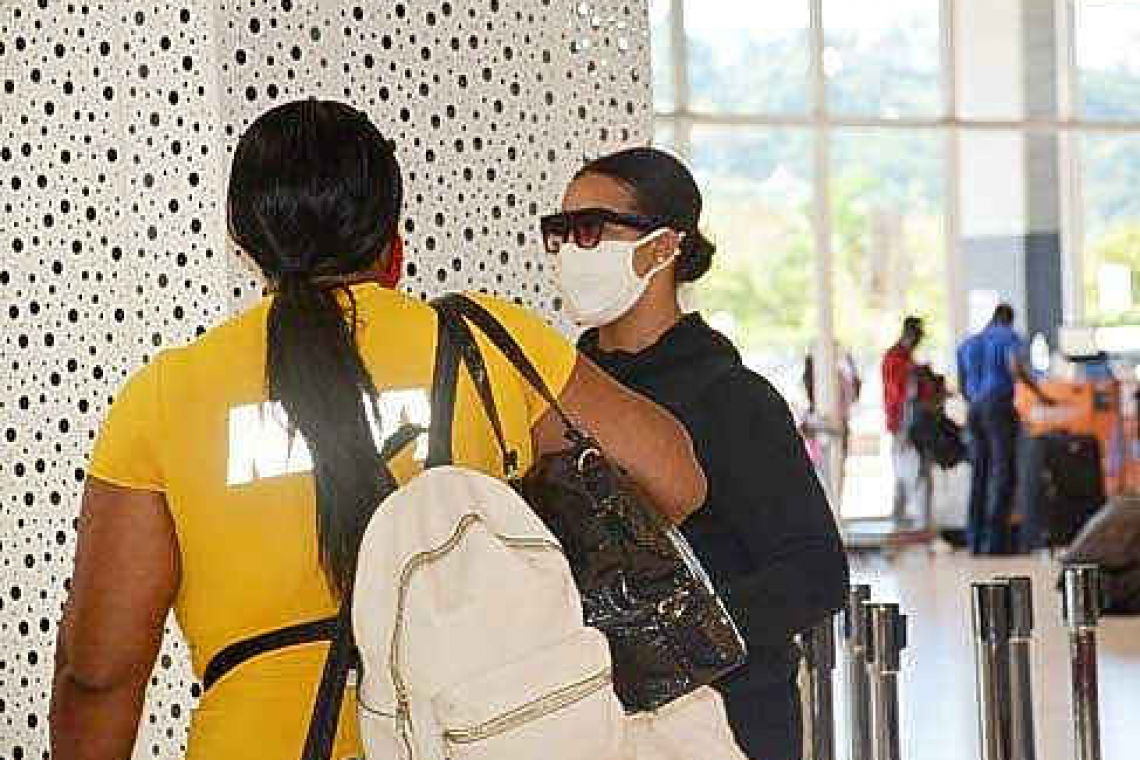 Collier (in black) and her mother, inside the Sangster International Airport on Sunday.

MONTEGO BAY, Jamaica--Kalina Collier, the United States (US) airline worker who, after testing positive for coronavirus COVID-19 reportedly faked that she was kidnapped in Jamaica and was being trafficked by a local hotel, left Jamaica on a flight from Sangster International Airport on Sunday afternoon.

She left the island after the Jamaica Constabulary Force (JCF) and the Jamaica Tourist Board (JTB) strongly refuted damaging claims that surfaced on social media stating that Collier was kidnapped.

The claim, initially made by Collier on social media, has garnered support from numerous individuals abroad who have called for a boycott of Jamaica after the young woman claimed that she was being held against her will.

However, Collier’s claims have been described as a ruse to avoid quarantine after testing positive for COVID-19.

“Absolutely not kidnapped, nothing of the sort. It was quarantine. This is what we do for each visitor that comes to the island who finds themselves in any unfortunate situation while they are on the island. That’s why we have a visitor relations department at the Jamaica Tourist Board, so that we go in and offer all the support that we can,” Jamaica Tourist Board Regional Director Odette Dyer told the Jamaica Observer.

Police said that upon arrival in Jamaica, the JetBlue employee tested positive for the COVID-19 virus and was placed in isolation, keeping with Jamaica’s COVID-19 prevention protocols.

“She remains in isolation and awaits medical clearance to be able to travel back home,” the police said in a statement on Saturday morning. In the meantime, police said representatives from the Ministry of Health and Wellness, the JTB, and the local police have been in contact with Collier’s mother, who arrived in Jamaica after her daughter.

“She was visited by local police on Saturday, February 13, and she is not, nor was she at any time, in any danger,” the statement said.

After completing quarantine she was subsequently granted medical clearance by the health department and deemed fit to travel as of Sunday. She left the island on Sunday afternoon.

The police warned persons to stop sharing social media posts claiming Collier had been kidnapped, as sharing false information can constitute an offence under the law.

Dyer, who was at the airport on Sunday to see the American off, noted that she maintained contact to ensure her safety while she was quarantined. “I was in constant contact with the general manager and sales manager at the hotel,” Dyer said.

After the video which purported the kidnapping went viral, tourism executive Delano Seiveright claimed that he started to get death threats “from random people who think she has been kidnapped and that we are all covering it up.”

The JTB regional director cited that the damaging video was temporarily taken out of circulation but resurfaced on Saturday, much to her chagrin.

“She made a video and put it out there on one of those social media platforms and it started blowing up the place, and people [were] calling, saying that human trafficking and sex trafficking are in the destination and all kind of things. They pulled down everything from their social media. And yesterday [Saturday – Ed.], for some reason, it started blowing up...exploding again. I have been bombarded with emails and telephone calls about [the fact that] what happened to her [is] encouraging people not to come to the destination – all kinds of things,” Dyer revealed.

She said that in a bid to repair the damage, she visited the hotel to invite Collier and her mother to do a video to state that they were safe, but they refused.

“So I left the hotel yesterday [Saturday] and found out that they got the release order and they would have been leaving today [Sunday]. So I just came out here today [Sunday] to ensure that everything is fine. They are okay,” Dyer shared. ~The Jamaica Observer ~