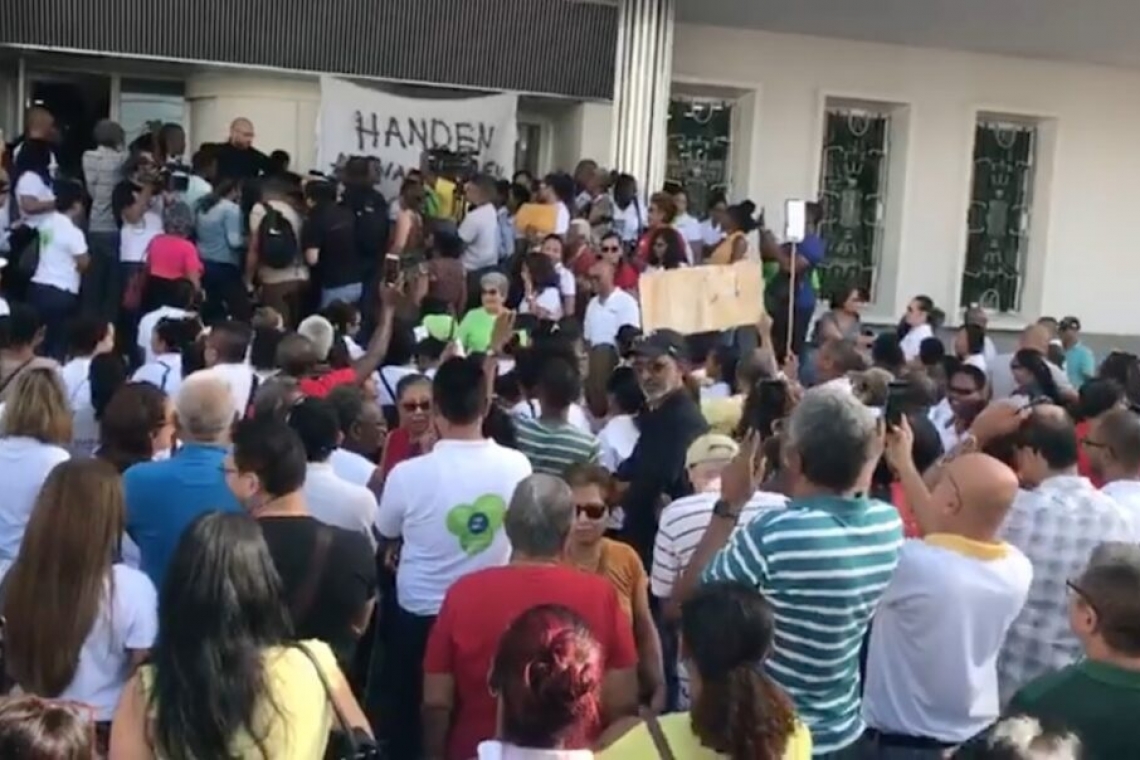 PARAMARIBO--Disgust and concern reigned in Suriname throughout the weekend, following revelations on Friday that US $100 million in private citizens’ savings that had been placed in care of the Central Bank of Suriname CBvS, had vanished. The news caused shockwaves but this quickly morphed into loathing when Vice President Ashwin Adhin attempted to restore calm with an explanation that the money had been used to buy potatoes and onions, among other things. The consternation appeared to lead to a stand-off between government and the manager of a commercial bank.

The discrepancy was disclosed on Friday by the Surinamese Bankers Association SBV. Its members, the commercial banks, had been instructed in 2019 to deposit 50 per cent of the foreign currency that they were holding as savings for their customers, at CBvS. The association reported in a press release Friday that during meetings with CBvS on January 26, it had noticed that the available foreign currency cash reserves were short the US $100 million.

“This is unacceptable and against the directives that CBvS itself had drafted. The banks are upset … that the CBvS misled them for months, with incorrect and incomplete information by the then Governor [Robert van Trikt – Ed.],” the bankers’ association stated. SBV said that it had demanded assurances that the moneys would be returned; CBvS will in the future also not be able to make transactions without knowledge of SBV.

The critical report prompted opposition parties to call for clarity from government. The VHP party demanded that President Desi Bouterse appear in Parliament to explain why CBvS misled the commercial banks and what he would do so people could retrieve their savings. If he could not, the president and his government should step down. The party accused government of using the US $100 million to pay off part of the barrage of foreign debts it has assumed in recent years.

The opposition’s attack ignited the ire of Vice President Adhin, who on Friday simultaneously admitted and tried to defend the controversial use of the cash reserves. Adhin said government had used the moneys to import potatoes, onions and other basic goods, and for foreign exchange interventions and investments that he did not give details about. He admitted that this had been done without the knowledge of the commercial banks. He also claimed that government had made certain agreements with the commercial banks about the use of their cash reserves.

The vice president seemed to throw the Central Bank and its recently fired Governor Robert van Trikt under the bus; Van Trikt had spent less than a year on the job when he was discharged over discrepancies and questionable actions he committed. “The Central Bank did not entirely keep their end of the deal. There were agreements on how we would use the money; it was clear that we would use it. The point is that it would be replenished every time we used it.”

Adhin charged at the opposition and other critics who, according to him, are spinning the disappearance in their favour. He called them nut-heads who use lies and half-truths to mislead the community into believing that government spent or stole their money. “They are only trying to sow confusion. This is fake news.”

“Absolute nonsense,” reacted Steven Coutinho, manager at the commercial De Surinaamsche Bank (DSB), which is private and government-owned. He insisted that the banks have been misled by the Central Bank. “They have played a game with us and stole the people’s money,” he said during a radio interview on Saturday. He said that if government really believed they had to use the moneys, they would have done better to invest in liquidity that brings interest, “not consumption goods,” he stressed.

Coutinho became manager at Suriname’s oldest bank some six months ago; his harsh, fearless stance against what he called “attempts to fool the people” prompted fears that government would demand he be sacked.

On Sunday several hundred bank employees and customers took to DSB headquarters in Paramaribo, where the bank’s Board of Directors would meet to discuss the developments. Some were bearing placards that read “Hands off Steven”; they expressed support for the director and cheered loudly when the board announced that they stood behind Coutinho and that there had never been intentions to fire him. Coutinho briefly addressed his supporters, charging “This nonsense needs to stop for once and for all.” He thanked his supporters and asked them to wait for the outcome of the coming investigations and not point fingers prematurely.

The unprecedented monetary drama places strain on President Bouterse’s hopes of winning a third term in the May 2020 general elections. As his National Democratic Party (NDP) is ramping up attempts to compete against other parties, it is important that the controversial president, who was sentenced to 20 years in prison for the December 1982 Murders of 15 of his political rivals, is able to maintain social, political and economic calm.