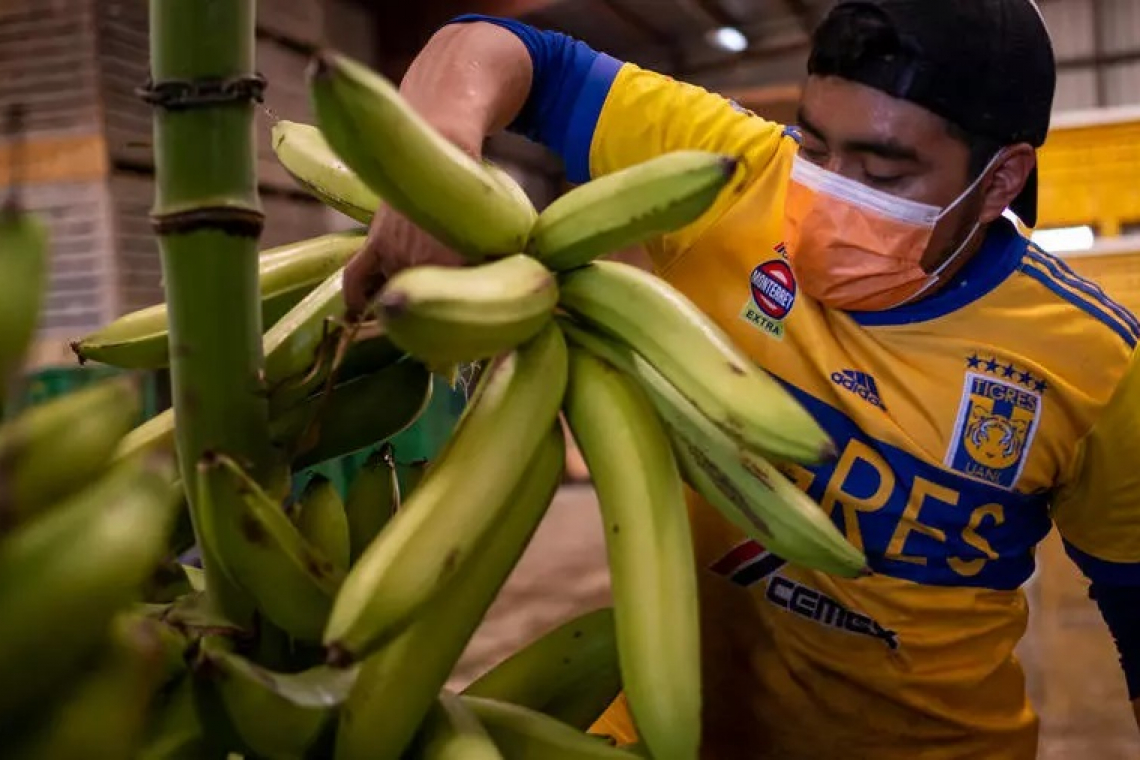 A Mexican farmer from Chiapas cuts harvested green plantains from a vine for distribution at a plantation warehouse in Guanica, Puerto Rico, on March 29. Photo credit Agence France-Presse (AFP)/Ricardo Arduengo.

GUÁNICA, Puerto Rico--Abigain Sebastian is delighted to make US $7.25 an hour toiling under Puerto Rico’s hot sun, tying the stalks of tomato plants. Back home in Mexico, he got US $7.00 for an entire day’s work.

“This is really good. For what we’re used to, this is perfect,” said the 22-year old – one among a wave of Mexican labourers brought in to make up for locals who find unemployment and US pandemic aid more lucrative than working the fields.

On Gonzalez Farm in Guanica, in the south-west of this US territory in the Caribbean, one group of Mexican workers can be seen operating a tractor. Another group washes bananas, while a third ties the stalks of tomato plants to stand upright, like Sebastian.

He is earning the US federal minimum wage, which does not go far in America. “This money is a reliable help,” said Sebastian, wearing long sleeves and a cap to protect him from the tropical sun.

But for Puerto Ricans, that $7.25 an hour is not enough, even with an unemployment rate of 9.2 per cent.

That is especially true when they are able to receive an extra $300 per week that comes in addition to their regular unemployment insurance, thanks to the pandemic relief plan also benefitting other Americans.

That is the case for Juan Santiago, who lives near Gonzalez Farm but preferred not to say where he worked. He lost his job in February, and his $290-per-week salary along with it.

Now he brings in $540 per week: $240 of regular unemployment benefits and the extra $300 as part of the historic $1.9 trillion pandemic relief plan signed by President Joe Biden on March 11.

“I’m doing better than when I was working,” Santiago told AFP. “I wouldn’t make that at the farm.”

A handful of US states, such as Texas and Pennsylvania, along with Puerto Rico, pay the federal minimum wage of $7.25 per hour. The rest have set their minimum wages at about $10 per hour, according to the US Department of Labor.

Sebastian arrived in Puerto Rico from Mexico last week as part of an initial group of 21 workers brought from Chiapas under the H-2A visa programme for temporary agricultural workers. Seventeen of them went to Gonzalez Farm.

“With this [pay], I also help my mom, who is a single mother. I have a little sister who is 14,” Santiago said.

According to economist Jose J. Villamil, the labour market in Puerto Rico is “dysfunctional”. Part of the problem, he says, is that the Puerto Rican economy is a regional subset of the whole United States economy.

“Since there is a big difference in wages between the island and other states, it is fairly easy for a Puerto Rican worker to go to the United States [mainland] and benefit from a higher salary,” Villamil wrote in a column in the local newspaper El Nuevo Dia on Monday.

Another factor is the “dysfunction” in the pandemic relief benefits, he said.

“Obviously, the pull to work for $7.25 is lost, and it’s logical that it would be that way,” the expert explained.

Hector Cordero, president of the Farmers Association of Puerto Rico, told radio station NotiUno 630AM last week that there is a need for 1,000 to 1,500 labourers on the island and that a group of Hondurans is set to arrive shortly.

Carlos Gonzalez, the owner of the 375-acre Gonzalez Farm, says his fellow citizens have “lost the culture of work.”

But he says he recognises that federal policy is not the only thing responsible for the flight of workers from his farm.

In the last two years, Puerto Rico has been hammered by two severe Category 4 hurricanes and a series of earthquakes that have aggravated the financial crisis that has plagued the territory for more than a decade.

“And with the pandemic, I can’t even tell you [the damage],” Gonzalez added.

As a result of this perpetual state of crisis, the population of 3.1 million people has dwindled 14.3 per cent since 2010, according to the US Census Bureau.

“Everything kept piling on and there came a point in which there were no more workers,” said Gonzalez, who grows crops such as bananas, tomatoes, onions and pumpkins.

But “this situation isn’t just about right now,” according to Gonzalez.

“It has historical roots in our colonial situation.” Source: Agence France-Presse (AFP) ~ France 24 ~