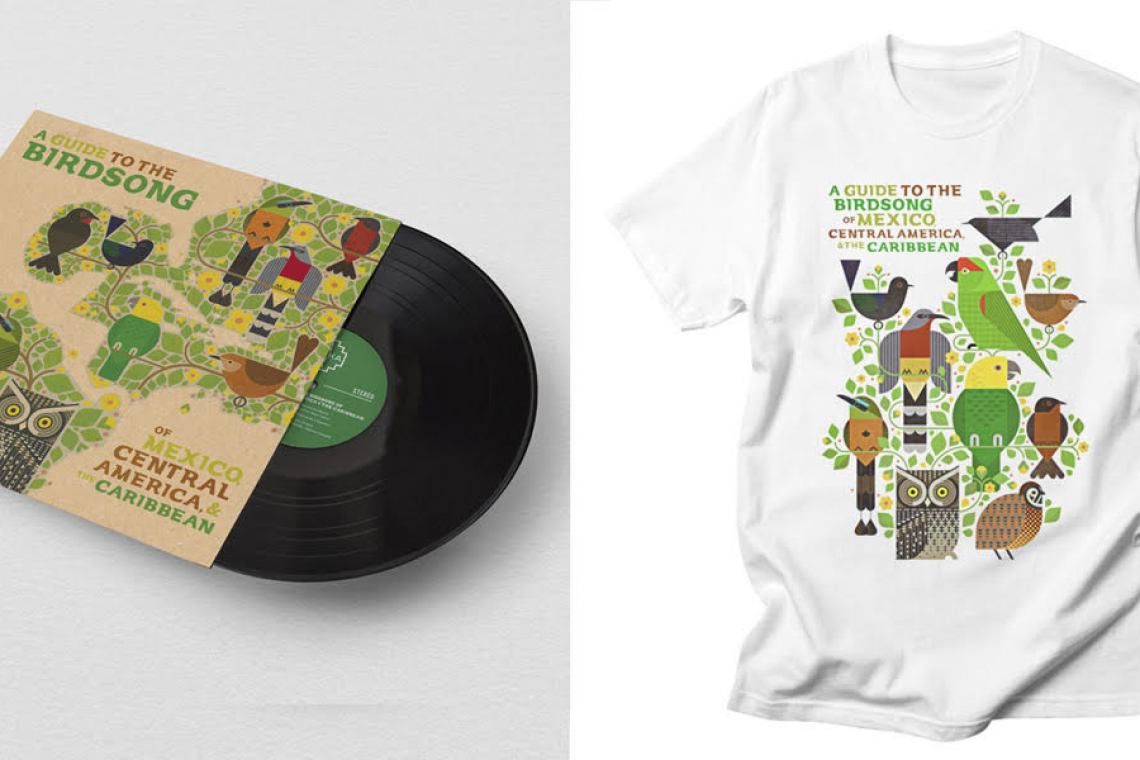 The birdsong album and t-shirt.

WASHINGTON DC--It is musical activism! Listen to the call of the endemic and elusive Jamaican Blackbird with a hypnotic beat. The Zapata Wren of Cuba sings sweetly, accompanied by delicate electronic notes. The Keel-billed Motmot of Central America emerges from behind gentle rhythms. The cries of Mexico’s Thick-billed Parrot blend with a finger snapping background.

These are some of the exciting tracks on the album, A Guide to the Birdsong of Mexico, Central America and the Caribbean. Released online in June by Shika Shika, sales of the music and merchandise have raised over US$30,000 to date, the non-profit label announced. The non-profit Birds Caribbean and three other conservation organisations in the tropics will benefit.

The ten-track album is a unique fusion of music and birdsong. The artists incorporate the songs and calls of endangered birds into their compositions. Single tracks, the full digital album, and limited numbers of the vinyl edition are available for sale. You can also buy limited edition posters, prints, and t-shirts with the album’s colourful artwork on the Shika Shika website.

In celebration of this fundraising milestone, Shika Shika has produced a podcast in English and Spanish. The podcast includes interviews with the directors of the four non-profit organisations. All explain how the funds will help in their conservation efforts.

“We are delighted to learn that the album is such a success, and we are grateful for the partnership with Shika Shika and the funds raised so far. We encourage music lovers and bird lovers to buy this wonderful music in support of our birds. The album also makes a great gift,” said Birds Caribbean’s Executive Director Lisa Sorenson. “All these bird species, many of them forest dwellers, are threatened by development and the destruction of their habitats. Birds Caribbean works with local partners for the conservation of birds and their habitats.”

The project is the brainchild of Robin Perkins, also known as El Búho (“The Owl”), a UK-born music producer and environmentalist. It is a follow-up to A Guide to the Birdsong of South America, released in 2015. Perkins first researched the most endangered birds in various countries. He then invited locally based electronic DJs and composers to produce one track each featuring the song of a particular bird. The contributors include some who are passionate birders themselves. The bird-loving guitarist of the well-known group Garifuna Collective in Belize composed a song featuring the Black Catbird.