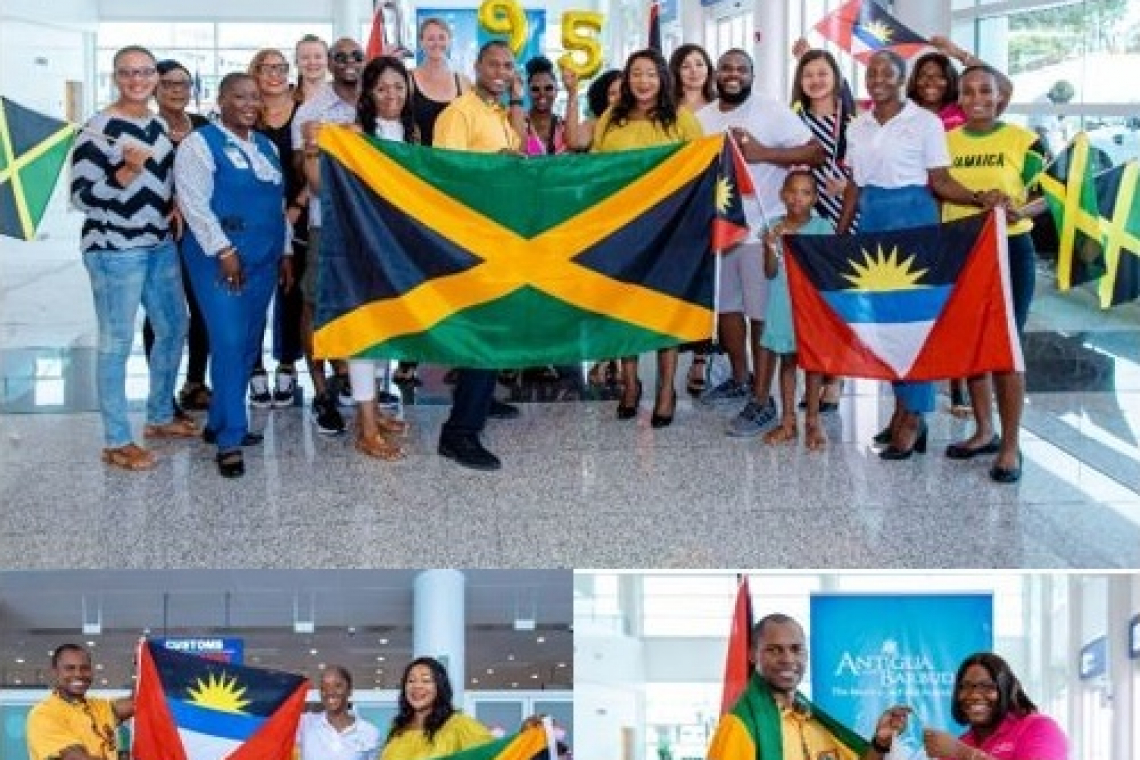 The Antigua and Barbuda Tourism Authority, the Antigua and Barbuda Airport Authority and the Jamaican Consulate in Antigua warmly welcomed Welds, alongside his family and travel friends who journeyed to Antigua to mark the momentous occasion with him, the release states.
Welds, who is Jamaican-born and migrated to the United States of America in 2007, is the first Jamaican, and possibly the first person in the Caribbean, to achieve this goal.
Marketing and Communications Manager for the Antigua and Barbuda Tourism Authority, Maria Blackman said, “We’re thrilled to be sharing in this celebration with Romaine. How amazing is it to be able to travel and experience the wonders and cultures of the world. We invite you to explore our twin-island paradise and immerse yourself in our culture. We also look forward to welcoming all future world explorers.”
Honorary Consul for Jamaica in Antigua and Barbuda, Dr. Onika Campbell proudly said, “It is warming to welcome my fellow Jamaican and his team to Antigua and Barbuda. Antigua and Barbuda is home to many Jamaican nationals, who for decades continue to enjoy the warmth and hospitality of the people.
“Your decision to complete your visit in Antigua and Barbuda speaks volumes of the historic, established and continuous bi-lateral relationship between Antigua and Barbuda and Jamaica,” noted Dr. Campbell.
Welds said his travel adventures began when he decided to visit bucket-list places he would see on National Geographic. From there he moved on to the “Seven Wonders of the World”, then Brazil, Russia, India, China, and South Africa (the BRICS countries) and the list kept growing. In 2016 when he reached his then goal of visiting 100 countries by the age of 30, he decided to take on the world, according to the release.
He reflected that, “As a student in Jamaica, I used to love geography. It was my favourite subject, but never in a million years did I imagine that I would end up visiting every country in the world. It has been a life-changing experience. I’ve learned so much while travelling and meeting other inspiring globetrotters around the world and now finally, I have made it to the finish line, visiting 195 countries while working full time.”
On his reason for choosing Antigua and Barbuda as his final destination, Welds said, “I thought it would be great to complete this journey close to home where it all started. I settled mostly on Antigua because it seems like a mini hub in the Caribbean with lots of flight connections. As I wanted my friends and family to get flights easily to join me on this final journey, and also for the beautiful beaches – the choice fell on Antigua & Barbuda.”
Welds will spend a week in Antigua, exploring the destination with friends. One can follow Romaine Welds Travel Adventures on Instagram
@Travelingtheworldwithromaine.
Welds currently lives in San Francisco, California, where he works for a major American airline company as a ground agent, which assists him in his travel pursuits. His next goal is to visit festivals and tribes around the world, the release concludes.