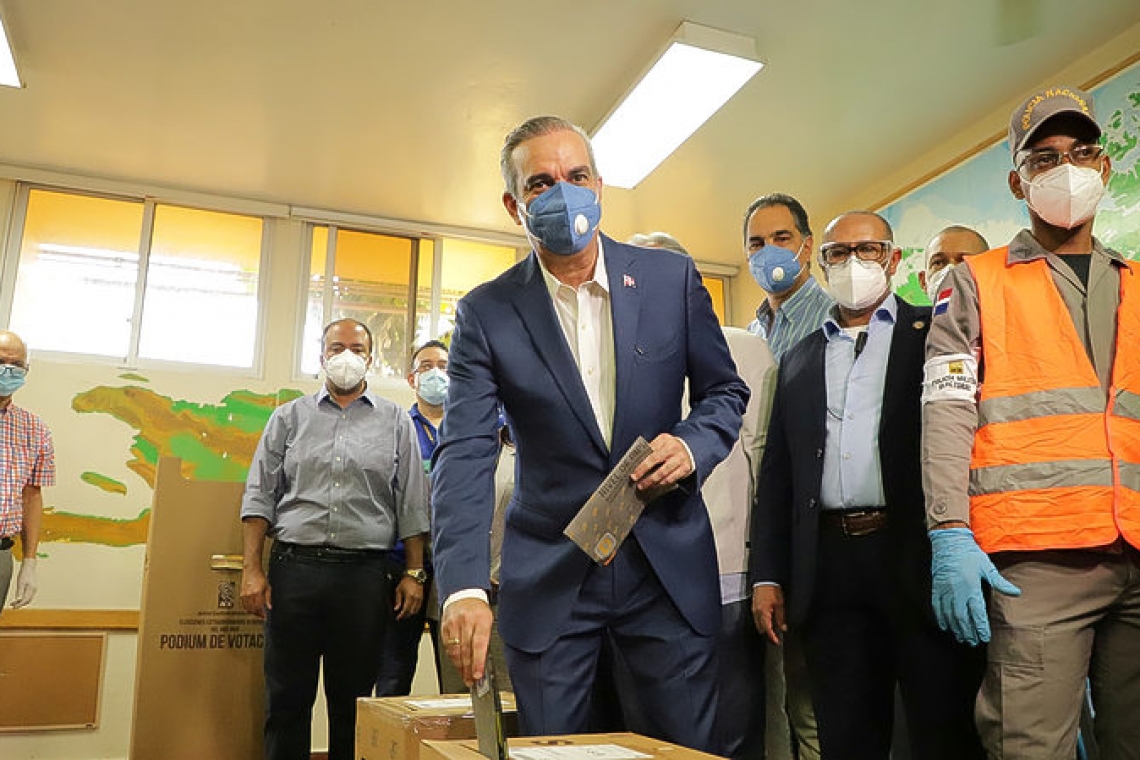 Nationals of the Dominican Republic living in St. Maarten cast their votes in their country’s 2020 general election at Sundial School in Philipsburg on Sunday. The Dominican Republic went to the polls on Sunday to elect its president, vice-president, 32 senators and 190 deputies. The election had originally been planned for May 17, but was postponed due to the COVID-19 pandemic.

SANTO DOMINGO, Dominican Republic--Millions headed to the polls in the Dominican Republic on Sunday, defying a coronavirus outbreak that had delayed the vote and forced the leading presidential candidate to briefly suspend appearances after falling ill with the disease.

Voters attempted to remain distanced in line, all wearing face masks and sometimes face shields and coveralls too. Polling stations provided antibacterial gel for them to disinfect their hands before casting their ballot.

The election will determine who will tackle the COVID-19 outbreak and its impact on the Caribbean’s largest economy, heavily dependent on a tourism industry now levelled by the pandemic.

Polls suggest the ruling Dominican Liberation Party (PLD) is set to lose power after 16 years as mismanagement of the outbreak, infighting, corruption allegations and inequality overshadow a strong economic performance.

The PLD’s candidate, former Public Works Minister Gonzalo Castillo (59) has been trailing in second place behind Luis Abinader (52) of the opposition Modern Revolutionary Party PRM. Both parties are centrist.

Incumbent President Danilo Medina (68) was ineligible to stand for re-election, having served two consecutive terms. He failed to win sufficient backing for a constitutional change to stand again.

With a close race expected, Abinader may not get the absolute majority needed to win. Results were expected late Sunday or today, Monday, and a runoff, if necessary, would be held on July 26.

“Tonight, I will be president of all [Dominicanos – Ed.],” a confident Abinader wrote on Twitter on Sunday shortly after casting his vote.

The country of 10.4 million, which shares the Caribbean island of Hispaniola with Haiti, held parliamentary as well as presidential elections even as coronavirus cases hit record daily highs. Four months after the first reported cases, there are now more than 37,425 and 794 deaths.

Critics say the government did not act quickly enough, reopened the economy too soon last month, and is too slow with testing.

Abinader had to suspend campaign appearances for a while after testing positive for coronavirus last month. He says he has since recovered and tested negative.

After postponing the elections from May, the government would have had to amend the Constitution to postpone them again.

Some voters were nervous about whether the balloting would go smoothly after municipal elections in February were suspended mid-vote. Officials at the time said there had been a glitch in the electronic voting system, but some Dominicanos suspected foul play.

“We hope that it all goes well and that the will of the people is respected during the vote,” said Luis Tito, a voter in the capital, Santo Domingo.

Some Dominicanos abroad could not vote due to coronavirus lockdown restrictions.

The ruling party was seriously weakened after former President Leonel Fernandez (66) broke away to form a splinter party in October. As candidate, he was polling a distant third.

However, in a dramatic twist, his wife and Vice President Margarita Cedeño remained with the PLD and ran on Castillo’s ticket.

Under the PLD’s leadership, the Dominican Republic has achieved seven per cent annual growth over the last decade. But the country has dropped 38 places in Transparency International’s Corruption Perception Index over the last decade to 137 out of 180 countries. ~ Reuters ~