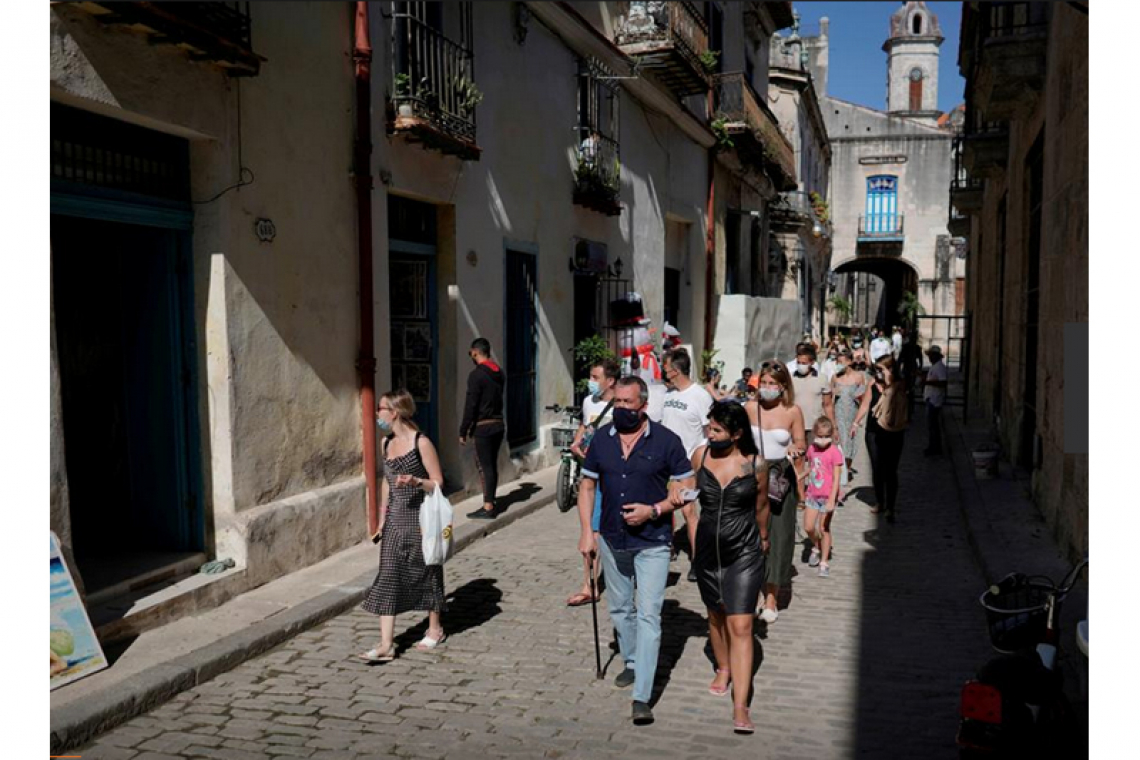 Tourists from Russia, staying in a beach resort, walk in downtown during a day trip to Havana, Cuba, on January 6. File photo credit: Reuters/Alexandre Meneghini.

HAVANA, Cuba--Cuba’s top epidemiologist said on Saturday irresponsible partying over year-end, often with relatives from abroad, fuelled a surge in coronavirus infections and he warned of a crackdown to prevent the spread of the disease.

Authorities in the capital at the same time announced new containment measures including suspension of interprovincial transport, cultural activities and the use of public spaces such as the famous Malecon Boulevard during night hours.

While Cuba’s Communist authorities have managed to contain the country’s outbreak far better than most other Latin American governments, infections have more than doubled since they eased lockdown restrictions and reopened borders in November.

Cubans from the large diaspora who have returned to visit, particularly from the hard-hit United States, or those returning from shopping trips abroad, have spread the virus to family members and beyond by breaking quarantine, the government has said.

Francisco Duran, head of epidemiology at the Ministry of Public Health, resumed his daily televised news briefings this week as a result and said on Saturday Cuba had registered 365 new infections over the previous day.

That brought the total for the first eight days of 2021 to 1,767, of which about 80 per cent related to rule violations by travellers, and Cuba was on track to break its December record of 3,675 cases.

“Legal measures will be taken because we cannot jettison the sacrifice of a whole country, a whole people,” said Duran, referring in part to the lockdown that accentuated Cuba’s existing economic woes, leading to an official 11 per cent contraction of gross domestic product in 2020.

Since the start of the pandemic, Cuban authorities have fined citizens for wearing their face masks incorrectly in public or contravening other rules, even sentencing some to jail time.

Cubans have complained that such factors as jam-packed public transport and hour-long queues outside supermarkets due to food shortages make it difficult to practise social distancing.

Authorities drastically cut flights from the United States, Mexico, Panama, the Bahamas, Haiti and the Dominican Republic from the start of the year in a bid to contain the new surge in cases and from Sunday will require inbound travellers to provide a negative test taken within the 72 hours before arrival.

So far the island nation with an ageing population of 11 million has reported just 148 deaths from coronavirus and 14,188 infections, around one-tenth the global average. ~ Reuters ~