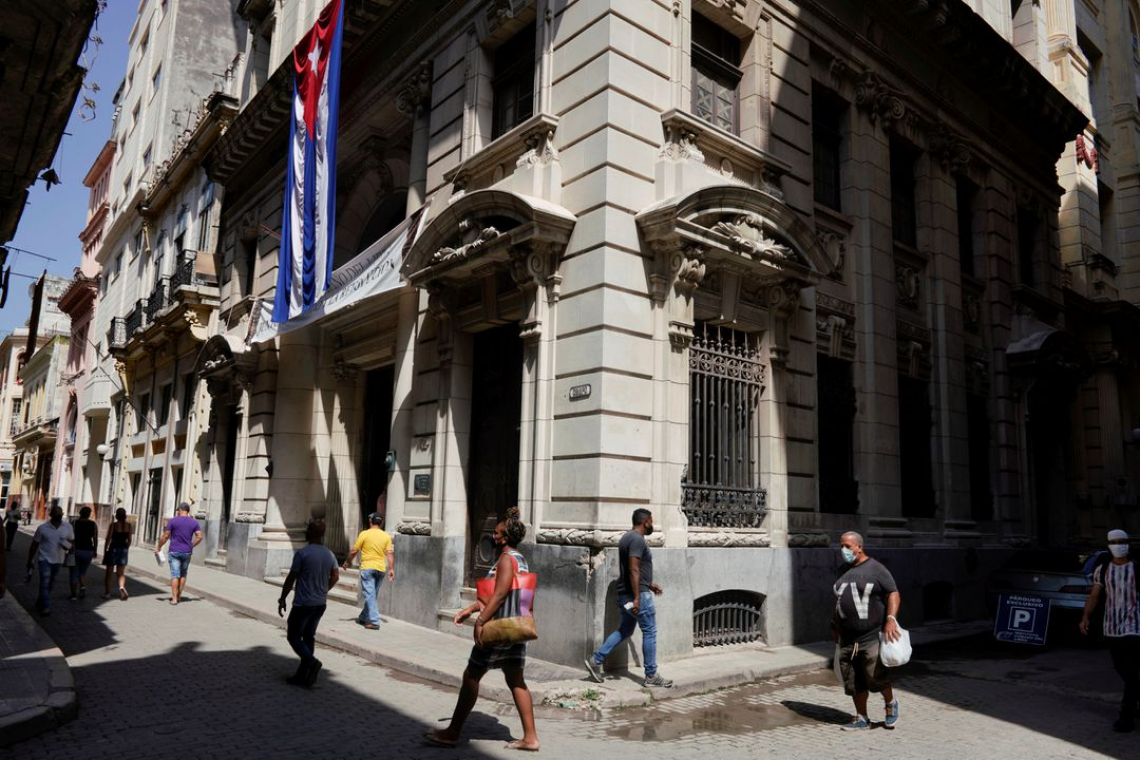 People walk under a Cuban flag at a commercial area in Havana, Cuba, on August 3, 2021. File photo credit Reuters/Alexandre Meneghini.

HAVANA, Cuba--Cuba plans to allow some foreign investment in local wholesale and retail trade for the first time since Fidel Castro’s 1959 revolution, the government said late on Monday, in a bid to dig out of the island nation’s worst economic crisis in decades.

Deputy Trade Minister Ana Teresita Gonzalez said on an evening TV talk show that foreign investors would be allowed to fully own local wholesalers for the first time or enter the market through joint ventures. Retail would be more restricted, but she opened the door to some public/private ventures in that sector as well.
The reforms would allow foreign-owned entities to invest in warehouse and back-end logistics operations supplying state-run and private businesses, for example, supporting the country’s effort to improve efficiency in its notoriously unproductive retail sector.
Gonzalez also said Cuba would “selectively” allow some foreign investors into the retail market, provided the investment contributed to the country’s socialist goals and lowered prices.
Domestic Trade Minister Betsy Diaz Velazquez said on the same talk show that the state would maintain its dominance in retail, but allow for some public/private joint ventures.
“We will prioritise these types of initiatives with foreign investors already in Cuba and allied countries,” she said.
The incremental measures come as Cuba struggles to redefine its largely closed, state-run economy after two years of pandemic woes and blanket US sanctions that have stymied recovery.
Rising discontent over long lines for basic goods, fuel shortages and rolling blackouts have prompted Communist party officials to fast-track long-delayed plans to reform the Soviet-style state-run economy.
Both officials said Monday evening the goal was to get more raw materials and goods into the hands of producers and consumers on the island – but economists and business people consulted by Reuters said the measures would likely fall short.
“It is a step in the right direction, but far too little and too late,” said Cuban economist Omar Everleny.
He said the measures were riddled with caveats and red tape.
“Both announcements were full of words such as ‘exceptions, control, conditions,’ as if they did not understand how serious the crisis is.”
A foreign businesswoman involved in Cuban trade told Reuters on the condition of anonymity that investors would continue to be leery of any deal that involved trade in local currency or debt.
She said the measures signalled the government was “refusing to break out of a failed model.” ~ Reuters ~