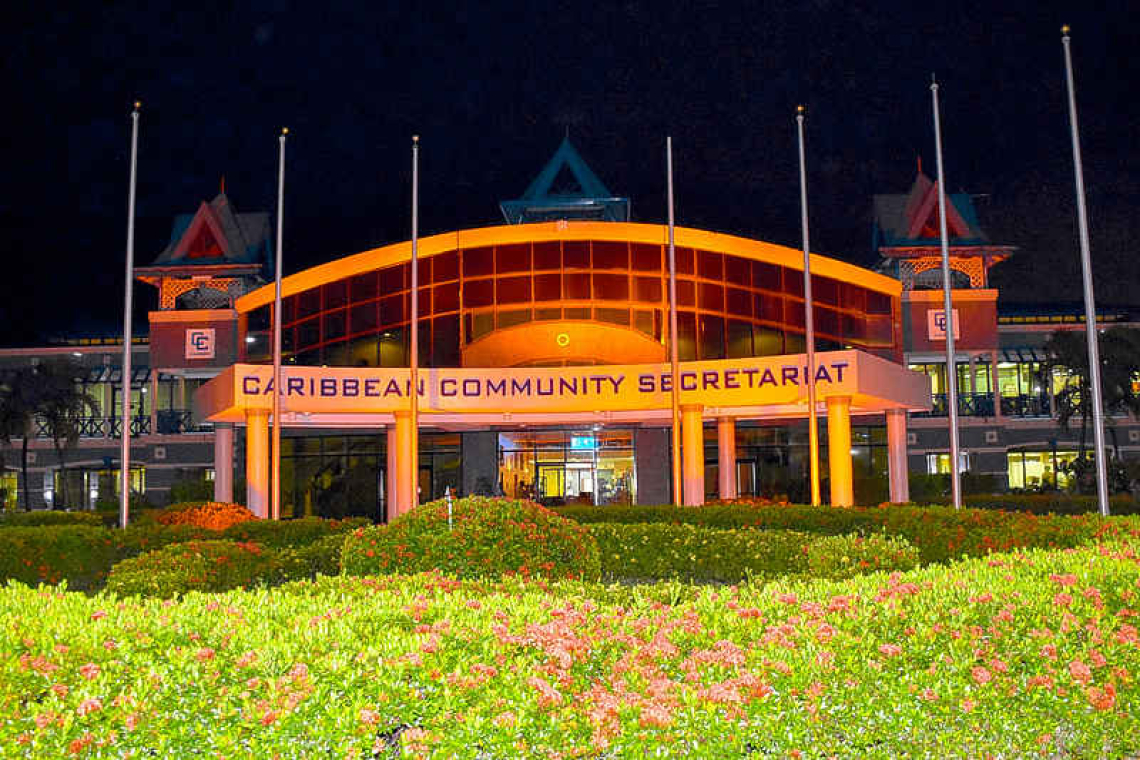 The CARICOM Secretariat headquarters lit in the colour orange.

GEORGETOWN, Guyana--The Caribbean Community CARICOM Secretariat illuminated its headquarters in Georgetown, Guyana, with orange spotlights on Tuesday, November 29, in recognition of 16 Days of Activism, which is being observed internationally. The awareness activities aim to bring attention to ending violence against women and girls, according to a press release from the CARICOM Secretariat.

The observance was held in collaboration with the United Nations Development Programme (UNDP) Regional Spotlight Initiative and formed part of the Secretariat’s awareness activities for the 16 Days of Activism, which commenced Friday, November 25.

In her feature address, CARICOM Secretary General Dr. Carla Barnett illustrated the significance of the building illumination and emphasised that the 16 Days of Activism campaign is intended to galvanise action to end violence against women and girls. “Its focus is to challenge harmful gender norms and end the impunity, silence and stigma that have allowed violence against women and girls to escalate and/or remain normalised in far too many countries,” stated the secretary general. She also highlighted that the colour orange was particularly significant as it symbolises a brighter future “in which all women and girls can live free of violence”.

Dr. Barnett highlighted that the Lighting Ceremony was occurring on Women Human Rights Defenders Day, the second of four signature observances, which anchor the 16 Days campaign, the release states. She underscored that human rights defenders worldwide are under threat, even as more formal state commitments are implemented to respect, protect and fulfil legal human rights obligations without discrimination. “Data from Front Line Defenders demonstrate that the killings of women human rights defenders are on the rise, as women are routinely targeted with violence, harassment, hate speech, discrimination, dissemination of personal or intimate information, defamation and other forms of online violence to silence or punish their activism,” stated Dr. Barnett.

The secretary general shared the sentiments of the UN resident coordinator, who spoke earlier, by highlighting “unsettling” data from prevalence surveys conducted globally and in the Caribbean. “Violence against women and girls remains the most widespread and pervasive human rights violation affecting more than an estimated one in three women globally, a figure that has remained relatively unchanged over the last decade,” stated Dr. Barnett. “As my colleagues from the UN highlighted, the Caribbean may surpass the global average with unacceptably high rates of intimate partner violence,” she said, according to the release.

Dr. Barnett further stated that the COVID-19 pandemic had exposed existing systematic inequalities supported by gender norms, which threaten to reverse decades of progress in women’s equality. She praised the work of international and regional agencies, which have raised awareness, mobilised advocacy and inspired individual and collective action to combat gender-based violence. The secretary general challenged stakeholders to work towards creating comprehensive and inclusive approaches that create the space for all to become activists for the prevention of violence against women, including civil society actors, human rights defenders, academia, artists, the private sector, governments, and men and boys, the release states. “This is not a struggle for feminist women alone,” Dr. Barnett pointed out.

As she turned on the switch to illuminate the Secretariat, Dr. Barnett reiterated the Secretariat’s commitment to ending violence against women and girls.

“The Secretariat is pleased to light up our building as a beacon of our promise to stand by women and girls and advocate for their protection,” she said.

Yeşim Oruç, UN Resident Coordinator, Guyana, commended the CARICOM Secretariat for highlighting the significance of the 16 Days of Activism and expressed appreciation for the Spotlight initiative collaboration. She shared that the investments in gender equality and ending violence against women and girls by development partners, notably the European Union (EU) and the United Nations at large, along with Member States, is a pathway to achieving the Sustainable Development Goals (SDGs) in the Region.

The UN resident coordinator referred to gender-based violence (GBV) as a scourge and emphasised that the rates of violence against women in the Caribbean are above global averages. Referring to recent data, she highlighted that one in every two women in CARICOM Member States experienced intimate partner violence or domestic violence in their lifetime; but Oruç expressed pride in the fact that Member States are implementing programmes to combat violence against women, the release states.

“Belize, Grenada, Guyana, Haiti, Jamaica, Trinidad and Tobago are implementing very successful Spotlight initiatives,” stated Oruç. “What we are recognising with this observance is that addressing issues of GBV, gender equality and women’s empowerment require a regional approach, and it is a testimony to the commitment of our international development partners, including the EU, to regional solutions for regionally shared problems and working through regional institutions, such as CARICOM, with whom we are very proud to be collaborating on the regional programme for Spotlight.”

The Secretariat will remain illuminated in orange until December 10, which is observed internationally as Human Rights Day, the release concludes.