Barbados removes Nelson statue in break with its colonial past 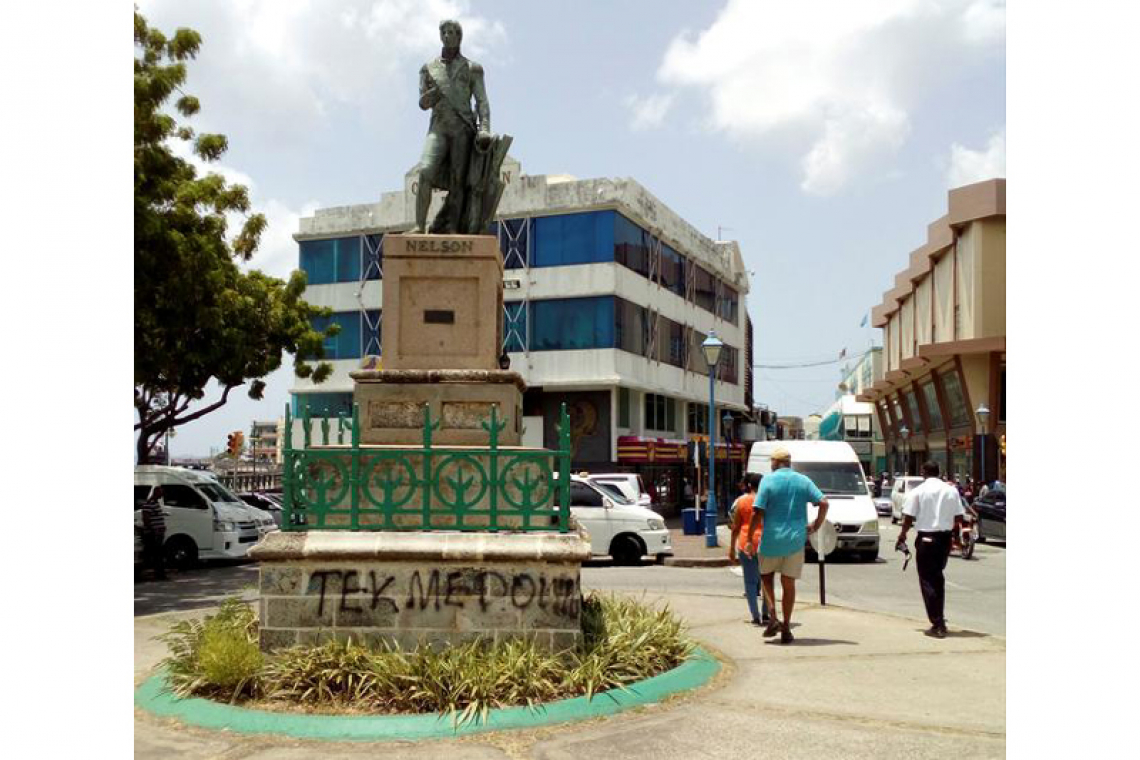 A statue of Royal Navy Vice-Admiral Horatio Nelson in Bridgetown, Barbados, stands with its plinth vandalised a day after the government of Barbados said it wished to remove Britain’s Queen Elizabeth as its head of state and become a republic, on September 15. File photo credit: Reuters/Nigel R. Browne.

BRIDGETOWN--Barbados removed the statue of British Admiral Lord Horatio Nelson from the capital Bridgetown’s main square on Monday, two months after announcing plans to replace Britain’s Queen Elizabeth as its head of state and move on from its colonial past. The bronze statue was unveiled in 1813 to commemorate Nelson and the British Royal Navy’s victory over the French and Spanish in the Battle of Trafalgar in 1805.

The Caribbean, then largely colonised by Britain, France and Spain, was also an important battleground in the Napoleonic Wars and the ruling-classes and plantation elite had the statue erected to mark his role in the campaigns.

But the statue has been targeted for removal by various administrations since 1990 as a vestige of colonial rule, made even more controversial because of Nelson’s defence of the slave trade upon which Barbados’ plantation economy was based.

The square where it stood was originally called Trafalgar Square but was renamed National Heroes Square in 1999, although Nelson is not on the list of Barbados’ 10 National Heroes. But it took the global reassessment of history and racism triggered by the killing of George Floyd, a black man who died under the knee of a white Minneapolis police officer in May this year, to prompt the government into action. At a ceremony on Monday night, Prime Minister Mia Mottley said the government accepted the statue was an “important, historic relic,” but, “It is not a relic to be placed in the National Heroes Square of a nation that has had to fight for too long to shape its destiny and to forge a positive future for its citizens.”

In a May 1805 letter to his friend Simon Taylor in Jamaica, retired Barbados Community College history tutor Trevor Marshall noted that Nelson wrote, “I have ever been, and shall die a firm friend of our present colonial system.”

He went on to denounce “the damnable doctrine” of abolitionists of the day like William Wilberforce. Nelson was killed on the deck of his flagship HMS Victory by a French sniper at the Battle of Trafalgar off Spain in October that same year. Two years later, Britain abolished the slave trade. “If Nelson had been alive, the end of slavery would have come even later,” Marshall said.

After decades of overlooking Bridgetown’s principal thoroughfare, the Nelson statue will be housed at the Barbados Museum in the Historic Garrison Area.

It joins a number of other statues around the world, including slave traders in Britain to Confederate generals in the United States, to have been hauled down as the Black Lives Matter campaign gathered momentum.

The famous statue of Nelson in Trafalgar Square in London – erected about 30 years after the Barbados one – has also been targeted by activists for removal.

Barbados was claimed for England in 1625 and became independent after more than three centuries of colonial rule in 1966. Its present day population of about 287,000 people are mostly the descendants of African slaves brought over to work the plantations.

Moves are underway now for Barbados to ditch Queen Elizabeth as its head of state and to become a republic before the 55th anniversary of its independence next year.