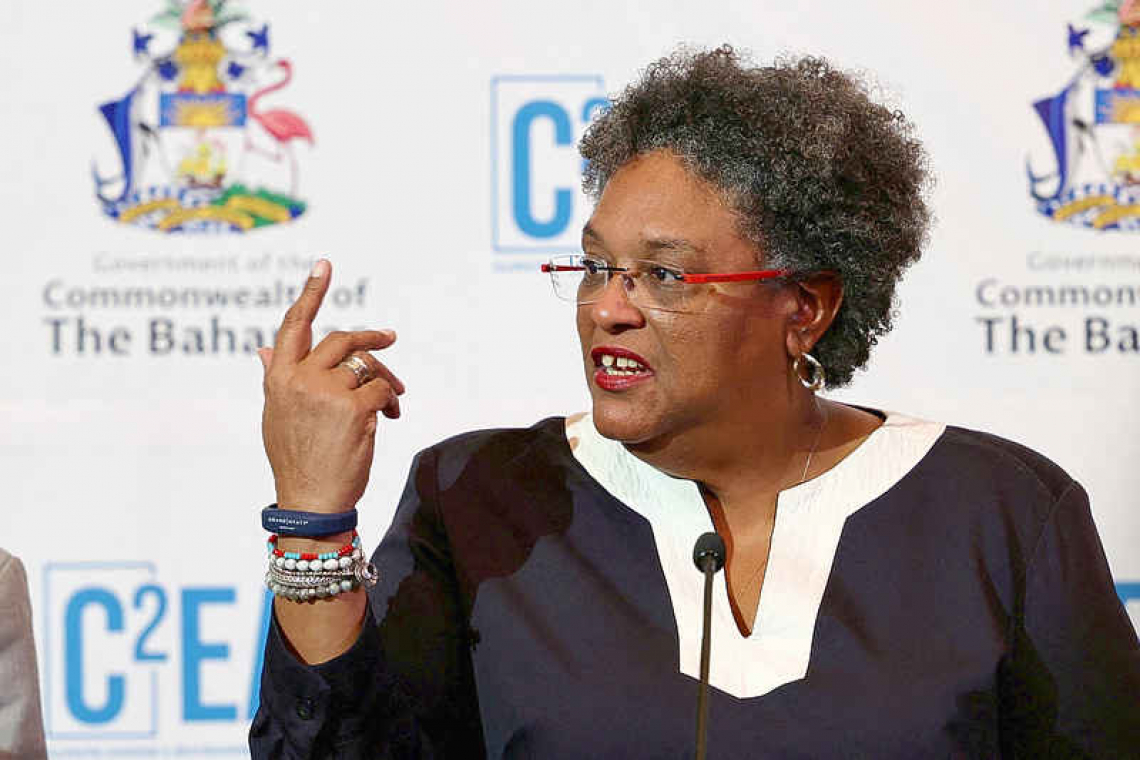 Barbados’s Prime Minister Mia Mottley speaks during a press conference at an event where leaders of Caribbean nations met for a two-day conference to discuss the region’s approach to the COP27 climate talks, in Nassau, The Bahamas, on August 17. File photo credit Reuters/Dante Carrer.

LONDON, England--Barbados has issued the world’s first government bond with a clause allowing payments to be suspended in the event of another global pandemic, a move expected to attract interest from dozens of other countries savaged by the COVID-19 crisis.
The Caribbean has become something of a test region for sovereign debt innovation in recent years. In 2015, Grenada became the first to put a “hurricane clause” in one of its bonds, sparking a flurry of copy-cat natural disaster deals.

Barbados’ new bond – finalised in a deal with bankers on Wednesday – is likely to leave an even bigger imprint, especially with smaller, tourism-dependent countries that were pushed to the brink of economic collapse during the COVID-19 pandemic.
The bond, to be repaid over the next 15 years, will be the first to allow a government to suspend its payments if another outbreak similar to COVID-19 happens. Payments can be suspended for up to two years at a time and twice, if necessary, but cannot be cancelled altogether.
The country’s Prime Minister Mia Mottley believes that if this kind of option had been available in 2020 to many of the countries now in trouble, much of the financial turmoil could have been avoided.
“It would have unlocked just under a trillion dollars across the developing world,” Mottley told Reuters. “And hence we would not be facing the kind of debt crises that many countries are about to face.”
Credit Suisse banker Ramzi Issa, who led on some of the key financing aspects on the bond deal which involved a buyback, said it was “hugely significant”.
“It sounds like a simple concept but it took quite a bit of time,” Issa said. “This a very valuable tool for governments to utilise ... is probably going to be a precedent for other sovereign financings.”
The clause also covers tropical storms, earthquakes and flooding but it is the pandemic element that is unique.

‘Dose of vaccine’
To be triggered, the World Health Organization (WHO) would have to formally declare a pandemic, or “public health emergency of international concern” in its wording, and Barbados itself would have to be diverting significant amounts of its resources.
Sovereign debt experts and bankers who have been heavily involved through this crisis and others over the years say the bond is a major milestone for the global borrowing markets.
“It is like a dose of vaccine for your debt,” said Sui-Jim Ho, a partner at Cleary Gottlieb – the law firm that helped craft the clause for Barbados. “You put it in and it protects you if another pandemic occurs.”
The bond deal has an ecological feature too.
Credit guarantees provided by the Inter-American Development Bank and an organisation called The Nature Conservancy (TNC) mean Barbados can borrow more cheaply, saving itself US $40-$50 million compared to its replaced old bond (see related story).
That money will be used specifically for protecting and rehabilitating the surrounding Caribbean Sea, according to the terms of the deal, making it what is known as a “blue bond”.
Barbados’ marine territory is 430 times larger than its land area, Mottley estimates, and its image of crystal-clear waters lapping palm-fringed beaches is crucial for tourism which accounts for over 40% of the nation’s gross domestic product (GDP) and provides roughly 40% of jobs.
“We are very much hopeful that others will follow,” TNC’s Managing Director of Sustainable Debt Slav Gatchev said, referring to Barbados using TNC and Inter-American Development Bank as guarantors.
“We have a pretty robust pipeline of half a dozen opportunities and we’re hopeful that we are going to close two or three of those in the next 12 months.” ~ Reuters ~