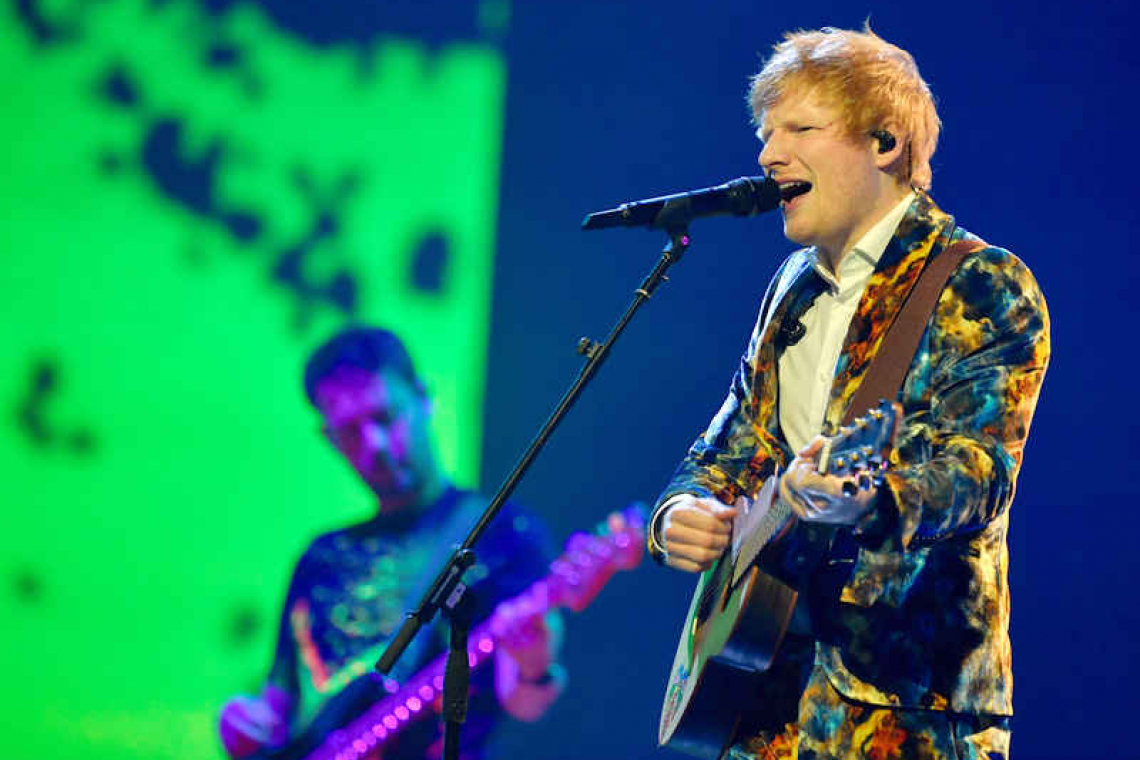 BUDAPEST, Hungary--English singer-songwriter Ed Sheeran won best artist and best song for "Bad Habits", while K-pop stars BTS snatched four awards at MTV's Europe Music Awards, which returned as an in-person event after a virtual 2020 edition due to the pandemic.

MTV said Sunday's EMAs, hosted in Budapest, would go ahead to show solidarity with Hungary's LGBTQ+ community following a June law banning the "display and promotion of homosexuality" among under-18s. It said the 2021 EMAs, held at the Papp Laszlo Budapest Sport arena, would be "a global celebration of music for all audiences around the world".
"I am so excited, I am very grateful to MTV. I think censorship of any kind of love sucks, and this is kind of a stand against that," international pop star Kim Petras, the first transgender performer at the EMAs, said on the red carpet.
Some gay couples arriving at the show were kissing on the red carpet and others were dressed in rainbow-coloured clothes in a show of support for LGBTQ+ people.
Lil Nas X was awarded best video for "MONTERO (Call Me By Your Name)," while Korean band BTS won the most awards with four including best pop, best K-pop, best group, and biggest fans. First-time EMA winners Måneskin took home best rock, while show host and performer Saweetie won best new.
Nicki Minaj earned a top award for best hip-hop, Olivia Rodrigo was awarded best push, Maluma won best Latin, and YUNGBLUD snagged the award for best alternative.
For the first time, the "MTV EMA Generation Change Award" winners were recognised during the EMAs main show, honouring five young people promoting equality while fighting against anti-LGBTQ+ policies. Viktoria Radvanyi, a Hungarian board member of Budapest Pride, accepted the award on behalf of the winners.
Prime Minister Viktor Orban, who faces a tough 2022 election, says the June law is aimed at protecting children. European Union leaders say it discriminates against gay and transgender people and goes against EU values.
The law has caused anxiety in the LGBT community under Orban's government, which has stepped up its campaign against LGBT people ahead of next year's ballot. As Budapest prepared to host the EMAs, Orban was re-elected chairman of the ruling Fidesz party unopposed. The anti-LGBT line featured strongly on the agenda at his party congress, with several speakers pledging to protect what they see as Hungary's traditional Christian values.
Orban's opposition challenger, Peter Marki-Zay, an energetic political outsider, has said he would scrap the anti-LGBTQ law if elected. He has said same-sex couples should be allowed to marry and deserve equal rights.
The show derived inspiration from Budapest's popular thermal spas and the Danube River, which runs through the capital, with stages that appeared to be floating. Grammy award-winning Sheeran opened the night surrounded by neon graffiti to perform his latest single, "Overpass Graffiti". Later he performed his chart-topping hit "Shivers".