Zebec accuses Heyliger, others of corrupt scheme at Harbour Village 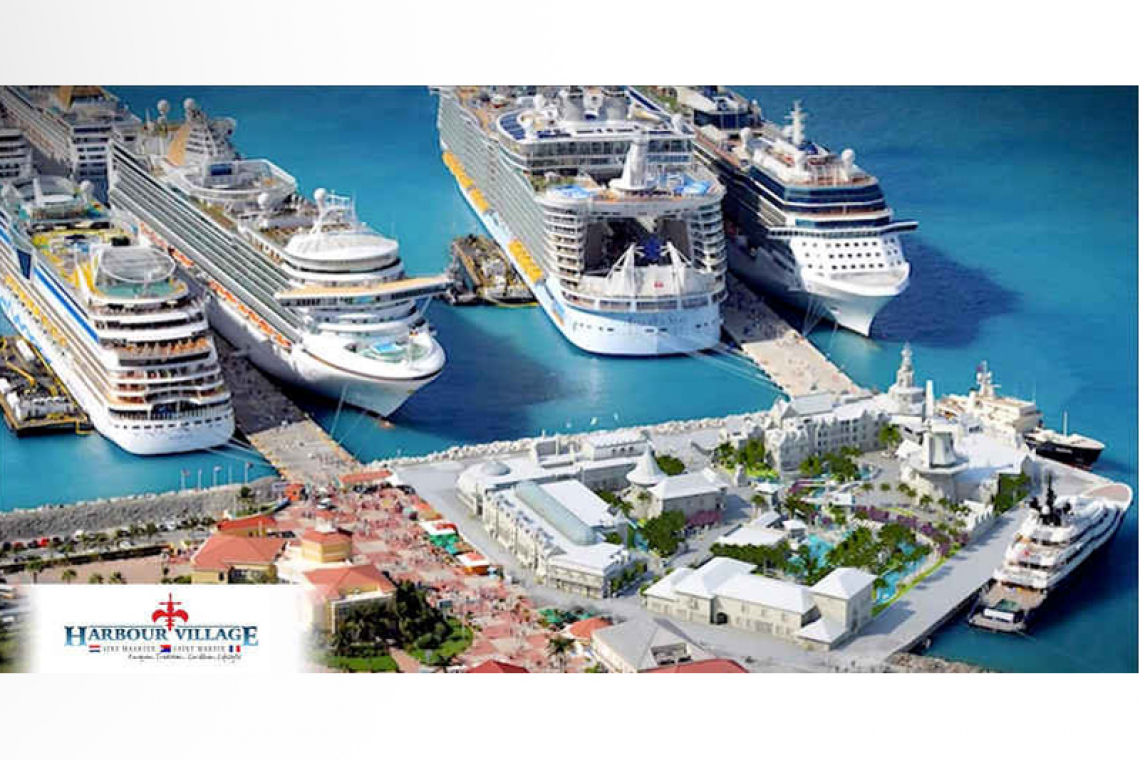 An artist design of what the Harbour Point Village would have looked like. (Photo courtesy Facebook page of Luis Goia)

POINTE BLANCHE--Zebec Development Company NV initiated legal action against Ocean Drive Properties and several individuals, including former politician Theodore Heyliger, whom it accuses of corruption, at the Court of First Instance on April 12, 2022. Jeroen Veen, a member of Zebec’s legal team, confirmed to The Daily Herald that the court date has been set for June 28.

Zebec was the initial developer of a parcel of land within the St. Maarten cruise terminal. It ultimately failed to successfully develop the Harbour Point Village property in the cruise terminal because Royal Caribbean Cruise Ltd. (RCCL) and St. Maarten Quarter Development Company (SMQDC) NV, refused to approve of the project unless the retail area were limited to 10,000 square feet and the project provided for “incidental commercial features” only.

The Harbour Village was intended to be a collaborative effort to develop the 13,000-square-metre parcel of land adjacent to the cruise piers into “an unrivalled mix of shopping and entertainment” that would include, among other things, restaurants, bars and a lazy-pool.

Zebec and St. Maarten Harbour Cruise Facilities (SMH Cruise) closed an agreement about the development of the parcel of land in 2010. After the Zebec deal fell through, the property was developed by Ocean Drive Properties (ODP) NV.

On August 25, 2015, Zebec and ODP closed a “commitment agreement” under which Zebec renounced its claim to the right of long lease and transferred all its designs for the project to ODP for an amount of US $5 million.

However, according to Zebec, once it was removed as developer and replaced by ODP, the conditions for the project were dropped. “The project developed by ODP is purely commercial and provides for retail space in considerable excess of 10,000 square feet,” attorney-at-law Jacob M.K.P. Cornegoor stated in a letter he sent to the ODP representative J.H., Heyliger and businessmen P.M., D.R. and R.E., on December 17, 2021.

“Over the past years, Zebec investigated the reasons behind RCCL’s surprising posture. Despite various obstructions – including perjury by addressees of this letter – it meanwhile brought the truth to light: there was a criminal conspiracy to have Zebec replaced by ODP in order to be in a position to siphon from the proceeds of the development, proceeds which rightfully belong to the community of St. Maarten,” attorney Cornegoor wrote late last year in his letter.

According to the lawyer, the addressees in his letter participated in illegal schemes, in particular in respect of “Unit 8” at the Harbour Point Village. “Zebec now knows and is in a position to demonstrate in court that Frivol Realty NV, Skylight Real Estate NV and Private Foundation Skyline all share the same ultimate beneficiary, namely Mr. Heyliger,” Cornegoor wrote. “You have made strenuous efforts to hide this fact, but those efforts have been in vain.”

Zebec holds each of the individual addressees in this letter “jointly and severally” liable for the damage they jointly caused. Their participation in the scheme to have Zebec replaced by ODP to “illegally skim” the rental proceeds of the development are considered wrongful towards Zebec. “It is irrelevant in this respect what individual actions were committed by each of the individual addressees of this letter.” They were part of a “common scheme and shared a common goal,” Zebec’s lawyer said.

Zebec said it had commissioned an expert to review the damages it sustained as a result of the inability to proceed with the development of the Harbour Village. According to the expert report, and taking into account “certain proceeds” of a settlement concluded in 2015, damages amount to $97,177,000.

Cornegoor’s law firm Hoff Advocaten in the Netherlands was instructed to commence legal action in the Court of First Instance in St. Maarten to recover these damages, unless the lawyer was to receive “unconditional admission of liability” from each of the addressees of the December 2021 letter, within two weeks.

Also on December 17, 2021, Cornegoor wrote another letter to SMH Cruise’s lawyer Chris de Bres of HBN Law and Tax. In his letter, Cornegoor informed De Bres of the results of Zebec’s investigations into the “coordinated efforts” of SMH Cruise and RCCL to remove Zebec as the developer of the parcel within the cruise terminal and have it replaced by ODP.

In Cornegoor’s opinion, the investigations established that Zebec’s replacement was part of a “corrupt scheme, designed to have Mr. Heyliger reap illegal benefits from the development of the property.”

According to Zebec, a lease agreement in respect of the Diamond International store located in one of the Harbour Village buildings was closed November 8, 2016. The name of the stated lessee was Private Foundation Skyline.

“It was established that in the past, Private Foundation Skyline was part of Mr. Heyliger’s corrupt structures,” Cornegoor wrote in reference to the back-to-back lease agreements in respect of other real estate within the harbour, the so-called “satellite shops”. By means of these agreements, SMH Cruise rented these stores to a company named Frivol Realty NV, which rented the same stores at substantially higher prices to the actual users.

A report by the Anti-Corruption Task Force established that Heyliger is Frivol’s ultimate beneficial owner, which, according to Cornegoor, was confirmed to his client by Heyliger and regional manager of Diamond International Moshe Hakimi.

“Since Frivol ran no commercial risk in connection with the subletting of the satellite shops and since it did not provide any additional service, it is clear that the insertion of Frivol between SMH Cruise and the actual users served no legitimate purpose, but served as a means of channelling kickbacks to Mr. Heyliger,” Cornegoor wrote.

Frivol was subsequently succeeded by a company by the name of Skylight Real Estate NV, which was in turn succeeded by Private Foundation Skyline (PFS) which, Zebec claims, is also a conduit for illegal payments to Heyliger.

PFS was subsequently succeeded as lessor of the Diamond International Store by ODP. In view of the fact that the lease agreement remained substantially the same, including its lay-out, Zebec concluded that ODP served the same purpose as PFS as conduit for payments to Heyliger.

Pertaining to the damage claim, attorney Cornegoor stated that his client Zebec and he are mindful that SMH Cruise may consider itself a “victim of Heyliger’s corrupt practices rather than a perpetrator.” However, his actions and those of the harbour’s Chief Financial Officer Ton van Kooten are still attributable to SMH Cruise. “Moreover, the fact that Mr. Van Kooten still serves as director of SMH Cruise even after he indirectly confessed to criminal wrongdoings on February 23, 2021, appears to show that SMH Cruise is still unwilling to distance itself from the perpetrators,” Cornegoor stated.

Since an action to recover the damages would be related to the settlement agreement, it would be subject to arbitration. Therefore, SMH Cruise is not a party in the legal proceedings set to start on June 28, Veen explained to this newspaper.

However, Zebec will still commence litigation in the St. Maarten court versus other alleged perpetrators, including SMQDC and ODP. In the event it was forced to pursue arbitration versus SMH Cruise in parallel with litigation, it would request the arbitrator to adjourn the arbitration awaiting the outcome of the litigation, so as to prevent conflicting decisions.

In November 2018, Zebec obtained permission from the Court of First Instance for a preliminary witness examination and the appointment of an expert. It depended on the outcome of the examinations whether Zebec would start a procedure against SMH Cruise, RCCL and possibly also other parties involved in the development of the Harbour Point Village project.

In August 2014, Zebec filed a legal claim for more than $100 million against St. Maarten Harbour Group of Companies and its then Chief Executive Officer (CEO) Mark Mingo for alleged breach of contract concerning the development of the Harbour Village project in the cruise terminal.

Besides Mingo, the witnesses to be heard by a judge were Vice President Commercial Development of RCCL John F. Tercek, Trust Office director Corinne de Tullio, Jelle Hamstra (ODP) and Hakimi. The litigation cases will not be heard in court before July 2022.