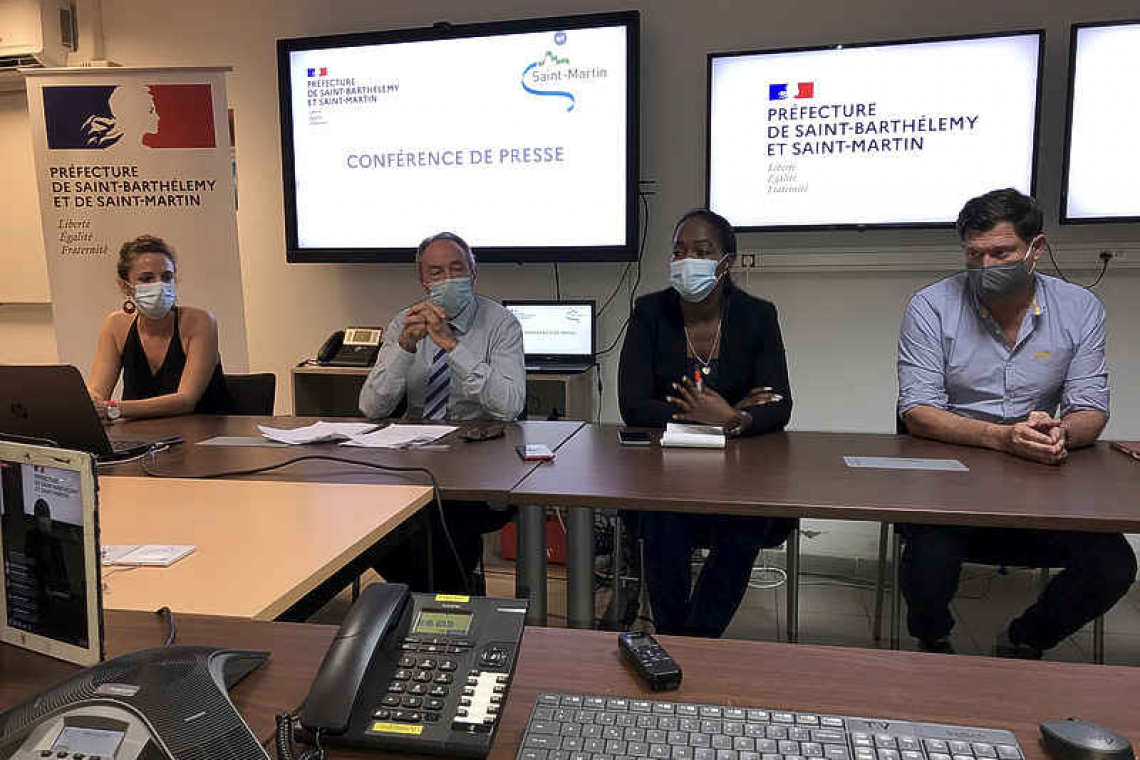 MARIGOT--A French tourist on vacation has died from a suspected shark attack in Orient Bay on Thursday afternoon, but confirmation that this was a shark attack will not be definitively established until the results of an autopsy, due to be carried out today, are obtained, authorities stressed.

Sous-Préfet and Secretary-General at the Préfecture Mickaël Dore convened a press conference Thursday evening to relay the facts, as they are presently known, to the media. The female victim (38) was swimming alone as far as 100 metres offshore when the attack happened. She had had lunch at a restaurant with a friend and then went swimming. A companion who was also swimming with her had returned to the shore first.

Persons on the beach heard several cries for help from the victim. Two employees of a water-sports operator went out with a boat to retrieve the victim. According to the Sous-Préfet one of the two employees spotted a shark in the water. The body was brought back to the beach where the pompiers from the Fire Department and Gendarmes were waiting to transport the body immediately to the morgue. It was understood the victim had died in the water.

Dore confirmed the victim had severe lacerations to her lower limbs but did not say a leg was missing as had been posted in some news outlets and on social media.

“We believe a shark attack is highly possible, and suspected,” he said. “The Public Prosecutor has immediately arranged for an autopsy to be done and brought in two experts to do it.”

First Vice-President Valerie Damaseau, on hearing news about the fatal accident earlier in the day, immediately implemented a 48-hour ban on swimming and water sports at all French-side beaches. She said at the press conference that this will be reviewed as more information comes to light and depending on the outcome of the autopsy. Gendarmes and Territorial Police will patrol beaches to ensure the restriction is adhered to.

Dore and Damaseau offered their condolences to the victim’s family.

Also present at the press conference were Director of Reserve Naturelle Nicolas Maslach and Océane Beaufort, a researcher and coordinator for the shark network REGUAR in the French West Indies.  Neither offered any plausible explanations for the attack based on the information so far.

Asked whether the restrictions on water-sports activity and decline in tourism in Orient Bay since COVID-19 entered the island have caused marine mammals such as sharks to be attracted into the bay, as suggested by one commentator yesterday, Maslach said there is no correlation with that at all, saying there have been no changes in shark behaviour, according to studies in recent years.

However, he did say that shark-fishing from the shore where bait is thrown into the water can attract sharks to come in to the beach. The practice is strictly illegal, he said. Only professional fishermen are allowed to fish for sharks. The pair did not offer any connection either with the shark found dead on the beach in Baie aux Prunes a few days ago.

Beaufort noted that direct shark attacks on people are extremely rare and only five fatal shark attacks have been recorded worldwide in 2018 and 2019.

St. Maarten Nature Foundation manager Melanie Meijer Zu Schlochtern declined to comment until more is known. She said she would be “extremely surprised” if it was confirmed as a shark attack.

The last known incident involving a shark in St. Maarten waters was on October 31, 2014, when a shark bit the calf of an employee of a local dive shop. She had been feeding sharks under water in the presence of a group of tourists at the time. She got accidentally bitten when she lost control of a piece of bait that drifted near her leg.