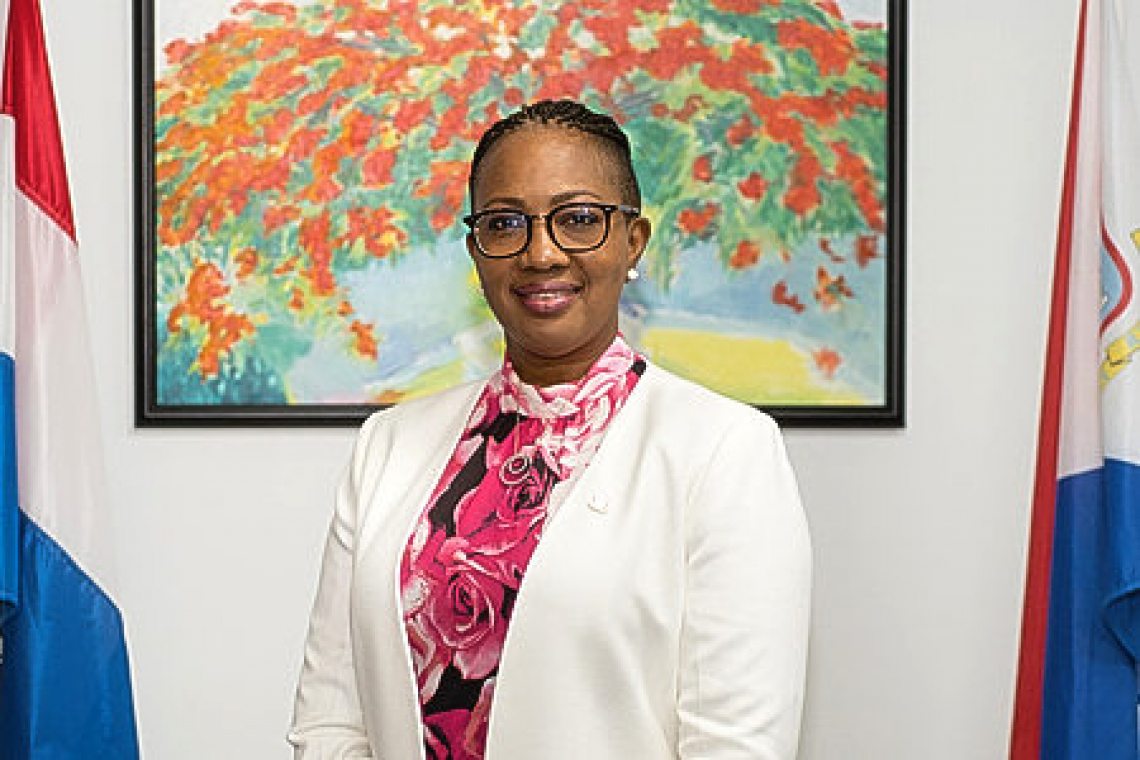 PHILIPSBURG--Touring the island on Sunday afternoon, Prime Minister Silveria Jacobs expressed gratitude for the island being spared disaster. “Tropical Storm Fiona was upgraded to a hurricane and is causing massive flooding in the Virgin Islands and Puerto Rico, which highlights the dangers we have escaped as a country,” Jacobs said. “We pray for those on Fiona’s path and give thanks that the impact on St. Maarten was minimal.

“We give gratitude for minimal damage, as clean-up continues. As seas remain rough with swells, caution is advised. This is not the time to let our guards down, as the weather has not fully cleared up. For those who operate small craft, we ask that you exercise extreme caution and sea bathers limit their activities until the waters have completely settled.
“I commend the people for adhering to the warnings. It was through your cooperation that we were able execute safety measures without dire incidents.”
Flood warnings, as they relate to Tropical Storm Fiona, were lifted as of Saturday evening as Fiona moved away from St. Maarten, Jacobs said on Sunday in reviewing the events.
All businesses were given the green light to be open as of Sunday morning at their own discretion. Some church activities chose to go online Sunday to avoid unnecessary moving. The roads remained relatively quiet on Sunday. After a positive assessment, Princess Juliana International Airport resumed normal operations at 7:00am. There were flight delays and cancellations, so those with travel plans are urged to contact their airlines for updates.
The port is open, but due to rough sea conditions with large swells, it was still unsafe for berthing. Another assessment was done at 2:30pm Sunday. Updates will be provided by the port authorities.
St. Maarten Police Force KPSM said that, generally before, during and after the storm warnings most things went smoothly; cooperation with Volunteer Corps St. Maarten (VKS) and the military was very good to maintain public order. Public compliance with the regulations in place was very high with very few measures needing to be taken.
Police and the military also assisted to clear roads where needed. Military assistance ended officially at 3:00pm Sunday. Road users are asked to continue to be cautious on the wet roads.
There was also solid cooperation with the Ministry of Public Housing, Spatial Planning, Environment and Infrastructure VROMI to prepare the trenches for the influx of water in the drainage systems, but also for clearing the roads thereafter.
The VROMI Minister updated that cleaning of all roads that were littered with debris, rocks and mud took place up to Sunday evening. The Pointe Blanche area where rocks and mud fell onto the streets was cleaned as much as possible and will receive another assessment to plan further clean-up. The clean-up of the rest of St. Maarten will continue.
A team under Community Development, Family and Humanitarian Affairs (CDHFA), consisting of CDFHA staff, K1 Britannia Foundation, Red Cross, police, VKS, Windward Islands Emergency Medical Services (WIEMS) and Leaders for Change volunteers oversaw the shelters. The team worked nonstop from the preparation of the shelter to open at 4:00pm Friday to ensuring proper management and successful closure at 5:00pm Saturday and ensuring that those seeking shelter were safely accommodated.
There was a great partnership and collaboration between government and non-governmental organisations/community service organisations, said Jacobs, who also thanked all stakeholders, harbour, airport; hotels, critical infrastructure such as major food suppliers, Sol gas stations and major hardware stores for their excellent communication and swift cooperation.
She extended a special word of thanks to her colleagues in the Council of Ministers, Emergency Operations Center, back office, Emergency Support Function coordinators and their teams, especially the Meteorological Department, Mr. Isaac and his team, the VROMI Minister and his team, Minister of Justice, Department of Communication, the police force, VKS, marines, Department of Community Development, Family and Humanitarian Affairs, and all volunteers who executed the safety measures.