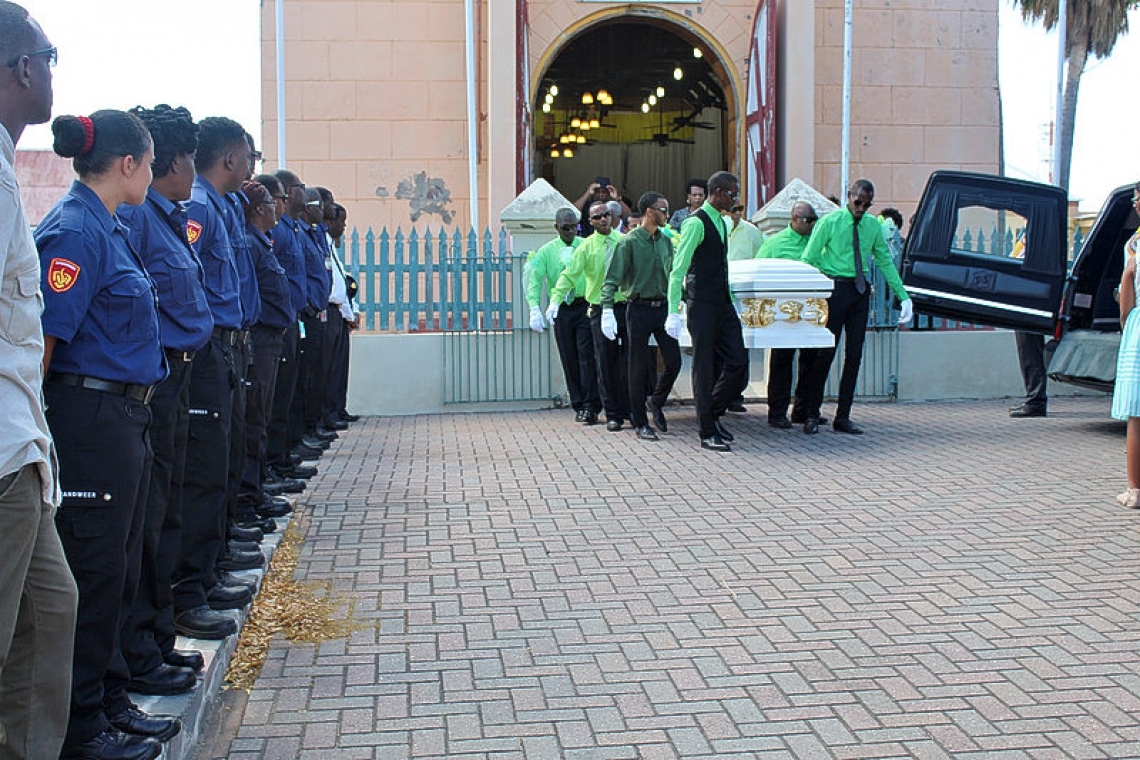 Caribbean Netherlands BKCN fireman as an honour guard while the casket is carried to an awaiting hearse.

RCN Office Manager Vivienne Lopes (behind fence, extreme left) paying her final respects to her mother as the funeral procession passes by, led by Father Simon Wilson and Lauris Reehuis-Redan.

Lopes-James was born in Statia in December 1951 and passed away in Colombia on May 10. Her funeral attracted a large crowd of mourners, many of whom observed social distancing. She leaves to mourn her husband, former GEBE/St. Eustatius Utility Company STUCO employee Azevedo Lopes, and eight children including STUCO’s Head of Water distribution Rueben Lopes, RCN Office Manager Vivienne Lopes; postman Ricardo Lopes, and Caribbean Netherlands BKCN fireman Julius Lopes.

Many of her family and friends came out to pay their last respects. The funeral was videocast so that persons who could not travel due to the travel restrictions could view it live.

Acting Island Secretary Malvern Dijkshoorn-Lopes, the deceased’s sister-in-law, read Lopes-James eulogy at the cemetery. Dijkshoorn-Lopes spoke fondly about Lopes-James’ life over the years, about her shy and giving nature, and memories and the lasting impression she left on those who knew her.

Lopes-James was in Colombia for medical treatment when she passed away. Her remains were flown back to the island on Friday.

On the way to the Salem Cemetery, the funeral procession passed by Cottage Road for Lopes-James’ daughter Vivienne to pay her final respects. Vivienne had accompanied her mother to Colombia and was placed in quarantine for 14 days on her return to the island. A member of the St. Eustatius Health Department was present with Vivienne at their lookout point.

Lopes-James death was not COVID-19-related.