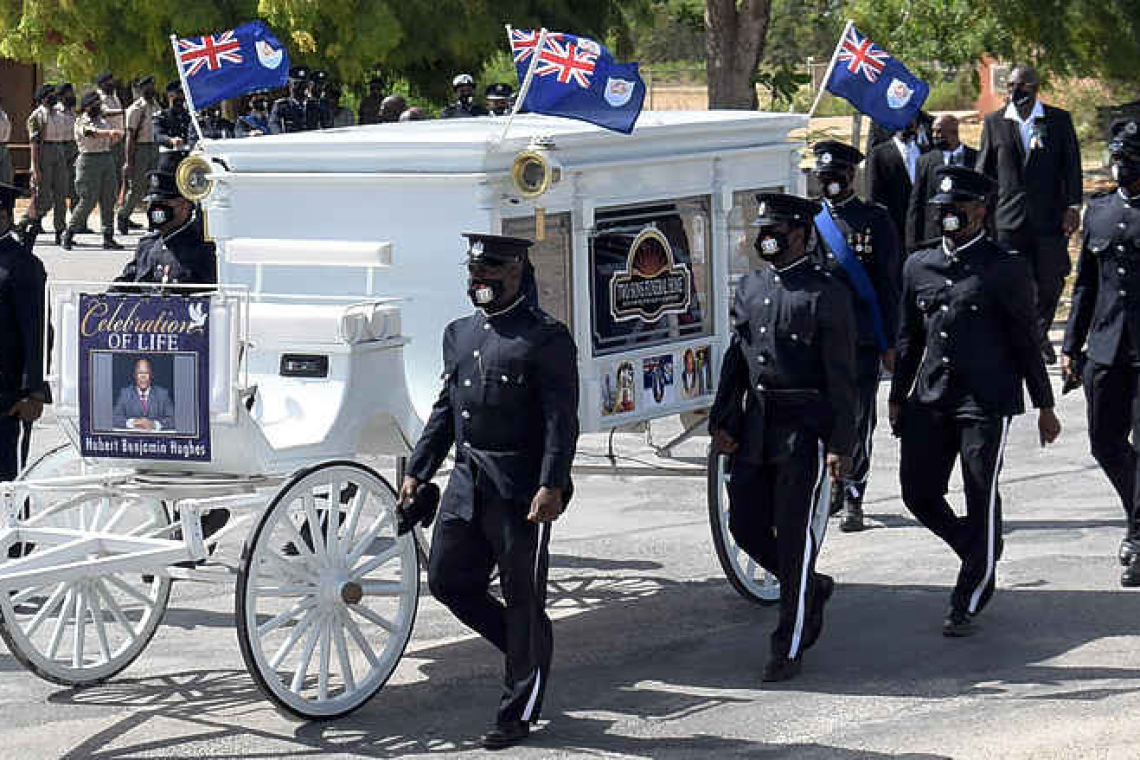 ANGUILLA--A wide cross-section of Anguillians gathered on Friday morning, June 18, to bid farewell to the late former Chief Minister Hubert Benjamin Hughes. His political service and leadership included 39 years as a member of the House of Assembly and three terms of office as Chief Minister.

Under a beautiful early morning sky and cool breezes, Hughes’ casket draped with the Anguilla national flag exited the Atlin Noraldo Harrigan Parliamentary Building where he had lain in state for three days. Carried on the shoulders of eight Royal Anguilla Police Force (RAPF) pallbearers, his wife Norma Hughes and family members along with members of government walked slowly behind his casket to the white carriage which transported him to the St. Mary’s Pro-Cathedral. 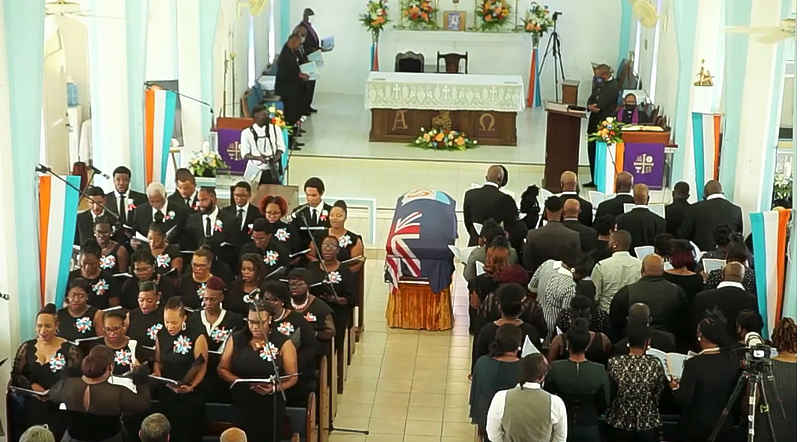 Led by the RAPF community band, a uniformed contingent of representatives from the Police, the Cadet Corps, the Fire and Rescue Service, the Prison Service, Pathfinders, Girls Brigade and Boy Scouts followed the carriage and vehicles carrying the family in a solemn procession to the St. Mary’s Pro-Cathedral. The sidewalks and building balconies were lined with onlookers paying their final respects.

There was not an empty seat to be had when the casket and official delegation entered the St. Mary’s Pro-Cathedral. Many attendees sat in the overflow outside seating area where they were able to view and hear the tributes, hymns and songs preceding the funeral service as well as the service.

In her tribute to Hughes, Governor Dileeni Daniel-Selvaratnam said, “We are here today to pay tribute to the former Chief Minister of Anguilla Hubert Benjamin Hughes, a man whose passion for the rights of the people fuelled his passion to make Anguilla a model of modern Caribbean government and society. I am grateful that I had the chance to visit Mr. Hughes in April, and although he was quite ill, the strength of his handshake and the look in his eyes revealed an inner strength and the statesmanship he had. He led a remarkable life of public service during a career spanning six decades. During his long and illustrious political career, he did not waiver on his commitment to the people, devoting all his time to the advancement of Anguilla and the pursuit of radical change. He possessed a unique leadership style: bold, decisive and at times was unconventional but he ensured that his message was heard. He has left an immense legacy of landmark reforms.”

Tributes continued from Speaker of the Anguilla House of Assembly, Barbara Webster-Bourne and Leader of the Opposition, Cora Richardson-Hodge, ending with a tribute from Premier Dr. Ellis Webster. Webster said, “The government and people of Anguilla are saddened by the loss of Anguilla’s third chief minister. He was elected three times as Anguilla’s chief minister. He was elected to serve in the House of Assembly in 1976, and from that time until his retirement from politics in 2015, he distinguished himself by seeking to be the voice of the voiceless, the champion of the underserved and the hope of the distressed. He was my mentor, he was my leader, he was a father figure to me.”

Government Minister Haydn Hughes and son of Hubert, Benjamin delivered the eulogy, saying that his father had many layers to him. He then recounted the circumstances that shaped his father’s political beliefs, his disdain for colonisation and the fight for Anguilla’s development which had to include the workers of Anguilla.