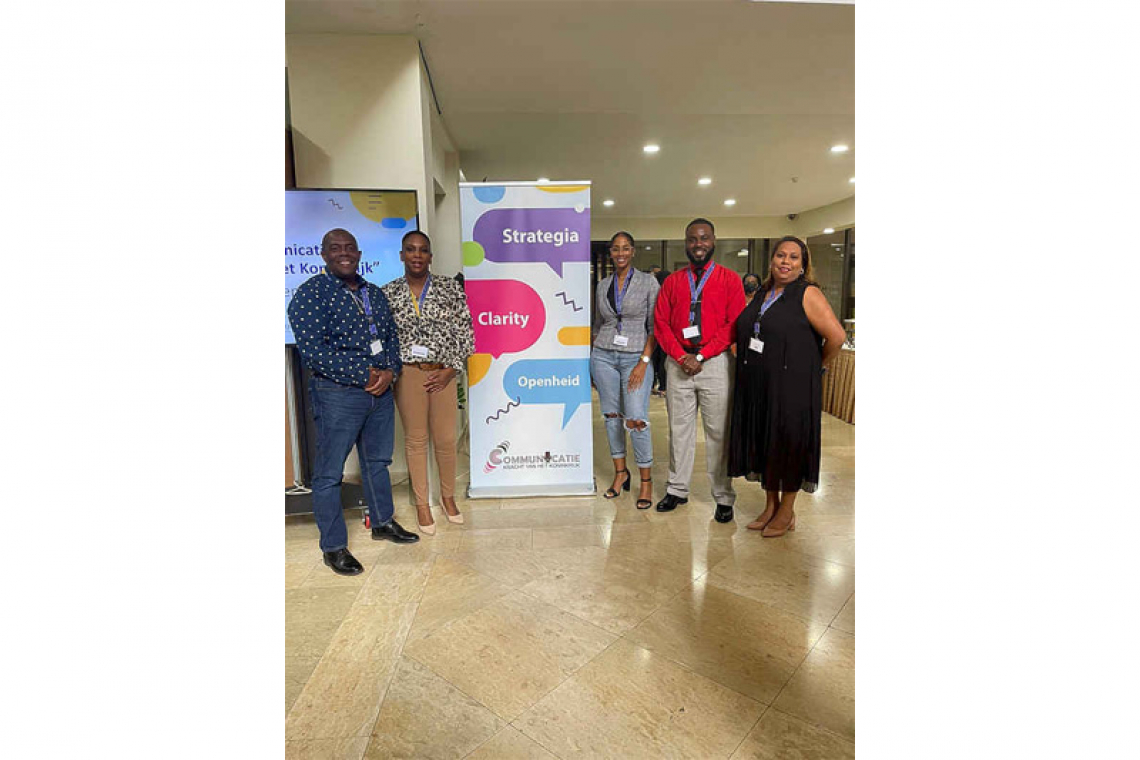 WILLEMSTAD/PHILIPSBURG--Five communication professionals from St. Maarten recently attended a two-day Communication Congress, under the theme “Power of the Kingdom/Kracht van het Koninkrijk”, in Curaçao. The congress was organised by the Rijksdienst Caribisch Nederland (RCN) and held in the World Trade Center (WTC).
Attending the congress were Inspector E.S. “Joe” Josepha (Acting Head of Department of Communication/Spokesman, Police Force of Sint Maarten), Alita Singh (Communication Advisor, Office of the Attorney General OM Carib), Giselle York (Head of Communications, National Recovery Program Bureau), Shari de Riggs (Communications Officer, Sint Maarten Medical Center), and Kevin James (Communication Officer, Integrity Chamber).
The congress brought together some 150 people in the communication field from the Dutch Caribbean, the Netherlands, and Suriname for masterclasses and workshops. The masterclasses included “Crisis communication: working together in the eye of the storm” facilitated by the Communications Department of the National Coordinator for Security and Counterterrorism and the National Crisis Center of the Ministry of Justice and Security in The Netherlands, “The power of the spoken word” related to speech writing and message framing, and “Strategic communication in practice – claim your position” presented by Mariëlle Bevers, Director of Communications at the Ministry of Education, Culture and Science OCW in the Netherlands.
Commenting on his experience at the congress, Inspector Josepha said the coming together of communication professionals in one location to share ideas, experiences, and to learn together was profound as was the opportunity to network. “Meeting each other personally as communication experts and networking with each other create and maintain strength within the group,” he said.
“For Sint Maarten, which lies in the hurricane belt, a comprehensive insight was given in ‘Crisis communication: working together in the eye of the storm’ about how the aid requests lines work during a crisis and the importance of building a network,” he added.
Josepha found the emphasis on the importance of intercultural communication among different groups to achieve community aims and inclusions was a needed aspect and much was learned in the masterclass: “The umbrella of intercultural communication” given by Angela van der Kooye, a communication specialist from Suriname.
Singh and Josepha by virtue of their organizations work very closely together every day. This congress gave them the space to also learn together and to build more bridges with colleagues in the same field. “For us, this was really a departure from our regular work schedule and a very welcomed one. After the masterclasses, we compared what we are already doing and how the insights strengthened our approaches and where we can apply a change of course as needed.”
“The congress also provided a platform for me to connect with my fellow Sint Maarten communication professionals as well as colleagues from across the Dutch Caribbean and further afield. The effects of the congress are still strong; with several follow up meetings and contact sessions planned between various organisations and entities,” said Singh.
York said of her experience at the congress: “The programme over the two days reaffirmed the vital roles that we all fulfil within our respective organizations as communication professionals. The masterclasses were insightful and timely. Hosting a similar communication event on Sint Maarten would be very beneficial to the people on the island working in the field.”
Adding her view, De Riggs shared that the congress was very beneficial to SMMC as it allowed her as the communications officer, to get acquainted and exchange knowledge with direct and indirect stakeholders within the kingdom.
“During the masterclasses, I learned about communicating during crises such as hurricanes and pandemics, and the important role of language and its influence on diversity, inclusion and organizational culture. Spoken and unspoken language also influence the way we interact and communicate with our patients, which is a vital aspect of the care we give at SMMC,” De Riggs said.
While in Curacao for the congress, De Riggs also met with the Curacao Medical Center’s Communications Team and had a tour of the new, state-of-the-art facilities. “This furthered the goal of gaining knowledge and strengthening partnerships as the team and I shared knowledge and had fruitful conversations about the important role that communications play in healthcare,” she said.
James of the Integrity Chamber Sint Maarten said: “The Communication Congress 2022 was extremely valuable. There was so much to learn from both the presenters and the fellow delegates. The connections that were established will be greatly beneficial for the Dutch Kingdom as a whole.”
The Communication Congress was opened on September 1 digitally by State Secretary Alexandra van Huffelen of Kingdom Relations. Curacao Prime Minister Gilmar Pisas also spoke at the opening.
This two-day conference was organized by RCN, the Ministry of Home Affairs and Kingdom Relations and other partners.