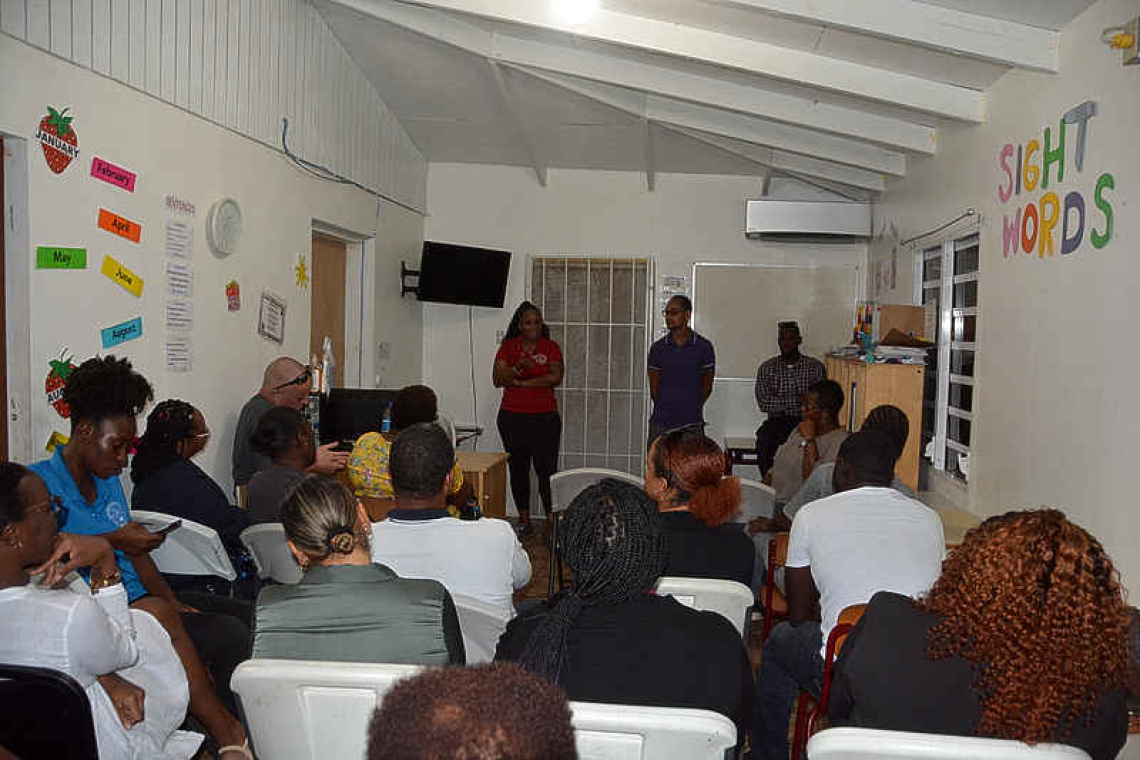 A scene during last night’s meeting.

MADAME ESTATE--The continued education of some thirty special needs pupils is in jeopardy due to the pending closure of Excellence Learning Academy (ELA) Foundation, which is expected to fold operations at the end of this month due to serious financial constraints after one of its main sponsors pulled out.

“The school is on its way out because of a financial deficit and there is nothing that I can do anymore,” a frustrated ELA Director Alisha Brookes told The Daily Herald Thursday.

The closure of the school will put about 30 pupils who have special needs, including some with Down syndrome, some who are non-verbal, visually impaired and with other impairments, without access to their accustomed regular form of education.

Parents said they were told during a meeting on Thursday night that an arrangement is being made with another foundation to take over the pupils and teachers, but the parents say the foundation in question has indicated that this is only possible until the end of June, after which pupils will again be in limbo.

The issue has some parents and teachers frustrated, upset and fearful for the future of the special needs children who will be affected. A meeting was held on Thursday night between Brookes and teachers and parents where the concerns were tabled and the issues discussed. Brookes confirmed that she will be closing the school, as there are simply not sufficient funds to continue.

“I did cry when I left [the meeting – Ed.] because it’s hard. I fight for my son. I have been fighting for my son since 2017,” said one teary-eyed parent after the meeting. “And now more than ever we have a big task ahead of us,” added the parent whose 12-year-old son who has Down Syndrome attends the school.

One parent said contradicting information was shared and parents and teachers are concerned about the mismanagement of the school and the handling and mishandling of funds, which some believe led to the current situation. The school denied this during the meeting, indicating that the institution was just working in the interest of its students.

ELA’s ballooning debts include an outstanding tab to Social and Health Insurances SZV amounting to some US $61,000 in unpaid AOV premiums. Other premiums are up to date. Parents said all of the pupils’ extracurricular activities such as swimming, tennis and others have been cancelled due to non-payment and that there are outstanding rent, utilities and other unpaid bills.

Brookes explained that the school had been keeping its head above water with the assistance of several sponsors and supporters, including St. Maarten Development Fund (SMDF) which provided a grant that covered the salaries of at least three teachers at the school. This significant assistance, which had been provided for two years, helped keep the school buoyant.

Brookes said ELA had been informed on December 29, 2022, via a letter dated December 22,2022, that SMDF, one of its key financiers, would be discontinuing its grant agreement effective immediately, due to discrepancies. “This came as a huge hit for the foundation's expenses. However, ELA understood the grounds for the decision,” Brookes said in a written statement shared with this newspaper.

“ELA has incurred debts to an amount that has become unmanageable. The school has been in constant negative financial distress, which has now led to the hampering of its daily operations. Regrettably, to the effect of teachers taking action.”

The school, she said, had to remain compliant with the payment of all its taxes, but she said this was simply not possible, as the income the school received was not sufficient to cover all of its expenses.

She said also that teachers had informed her last week that they would be striking to let parents know about the issues with the payment of salaries, as not all parents had paid their school fees. The teachers, support staff and members of the management team downed their tools and took a stand against the continuous late salary payments.

No help from government

Brookes spoke about her uphill battle to get assistance from government, to no avail. She had met with various Education Ministers in the past and made presentations in Parliament to discuss pressing matters such as subsidy, financial assistance, location needs and more, to no avail.

Special education organisations, schools, and facilities as such, she indicated, are an increasing demand, and having 30 students displaced will be a major challenge for the parents, the students, teachers, support staff, management team members, and the educational system.

“ELA has pleaded for the importance of financial support from subsidies and private donors. Unfortunately, the cost exceeds the provisions needed to operate.”

The ELA team has been looking for solutions from corporate organisations and sponsors to assist with the monthly expenses such as activities and other expenses, but this has been unsuccessful. “Nevertheless, we remain seeking solutions to resolve the pressing matter so that the school can move forward without closing its doors.”

She issued a plea for help, noting that if government steps in and helps with subsidy, the doors of the school could remain open. “At this time, relevant authorities need to step in and save the school. Parents and I have been trying for five years begging for assistance,” she said.

Brookes said she sees one of three things happening to keep the school doors open: either that the school fee is increased to $500 to $600 monthly so that the school’s operations can be covered; or parents come together and meet with authorities to see what assistance can be given to the school; or close the doors and hand over the school to someone else.

Her preference is for the school to remain open and she will attempt again to have an audience with government to see whether urgent and immediate assistance can be provided.

Overall, parents are sad about the developments. One parent, Mireya Torrenga-Maria, said she and her husband are grateful for the help that the school and its teachers has provided to their child over the years. She said their child loved the school and their child as well as other students had been progressing at their own pace.

However, she said that some things were not lining up and parents were hearing that the school would close, but had not received any official information from the school until Thursday evening. She said many children came from the regular education system and they were unable to function in these systems as they had special needs.