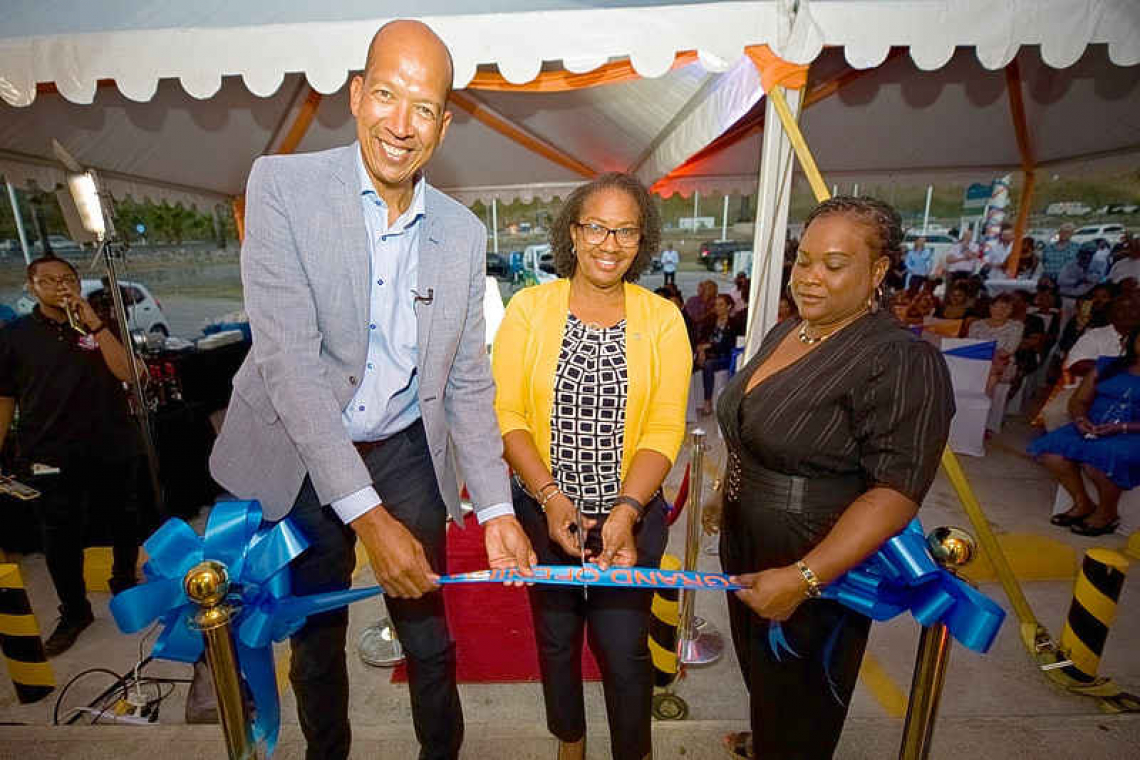 Sol Bush Road and Sol Simpson Bay Service Stations were opened earlier in the day Friday and the celebration of the opening of all three took place at the Sol Causeway location in the late afternoon in the presence of dignitaries, invited guests and Sol staffers and family members.

Sol General Manager Robert-Jan James said the Bush Road and Simpson Bay stations are operated by first-time business owners, both of whom are women.

“It took a great team effort to get to this point,” James said.

With the latest rebranding, Sol now serves the public of St. Maarten through a network of eight Sol-branded service stations.

“Like most of us, Sol was heavily impacted by Hurricane Irma. Many of our service stations suffered severe damage, similarly the Cole Bay depot (bulk) and airport facility suffered significant damage,” he said. “Sol invested substantial funds to rebuild the facilities in St. Maarten. With the support of our corporate office as well as local contractors we were able to rebuild all of our service stations. All depot tanks are upgraded and the facility is one of the most modern within our network.”

He said Sol continued to invest in its facilities to continue to improve its customer service and operational efficiency, and pledged that it will continue to do so in the future.

“As we are now part of Parkland International, a publicly-traded Canadian company, we are always looking to grow the business – both organically, but also through acquisition. The purchase of the Texaco business was a major opportunity for growth for us.

“As we see St. Maarten rebound not only after Hurricane Irma, but also after two years of pandemic, it is clear that we as a country are resilient as ever. In aviation, for instance, we have seen a tremendous increase in traffic and volumes of jet fuel sales, reaching near pre-pandemic levels.”

While a tremendous turnaround of the economy has been seen, James said, Sol recognises that the current increase in cost has had a major impact on everyone and St. Maarten has not been spared.

He said there have been significant increases in the prices of all petroleum products, including the gasoline and diesel-fuel prices at the pump.

“We expect this volatility to continue for the foreseeable future. The Russian invasion of Ukraine has had a devastating impact on the global economy. While in December the cost of crude oil was still around US $66 per barrel, it has since increased dramatically, topping out at nearly $130 on March 8, the highest it has been since it reached an all-time high of $140 in 2014.”

The price of crude oil is the primary factor that determines the final price of gasoline at the pump.

“So, while on that topic, I do wish to clear up one misconception: the margin we earn on one litre of gasoline is a fixed nominal margin. So, whether the cost of gasoline is one guilder or two guilders or even more, we still earn the same. This increased cost of oil has not only impacted the cost of gasoline, but also the cost to transport it and get it here. Freight rates have gone up, and I think we have seen that just in the cost of products we buy on island alone; cost of container shipping has seen huge increases.”

To illustrate the dependence on oil and its fluctuating price, James said he had read an article recently that stated that the soaring crude oil prices make the cost of pretty much everything else go up too.

“Oil is not only used to produce products like gasoline and diesel, but chemicals derived from oil are used to produce plastics, polyester, and fibres. Yes, the clothes you are wearing contain derivates from petroleum products; so do make-up, shampoos and soap. The correlation between the cost of crude oil and the cost of living on St. Maarten is real.

“The Central Bank of Curaçao and St. Maarten … issued a revised economic outlook for this year, revised downward as a result of higher-than-expected inflation (over 4 per cent), caused by … the high cost of oil,” he said.

He also spoke about Sol’s transition to renewable energy products (see related story). He commended the engineering and construction team and said all the work had been executed by local contractors. He also lauded his team for ensuring the Sol Brand meets the standards at all times, and for ensuring that Sol runs an efficient business operation.

Sol Project engineer Renaldo Sealey thanked all contractors for safely executing the three service station rebranding projects according to plan and the operations team for their hard work through the season, and for working safely.

Sol Retail Sales representative Marisca Peterson formally welcomed the dealers to the Sol retail network and said she is very proud, as both new dealers are women and first-time business owners.

Sol staffers and their family members as well as customers and stakeholders from the Dutch- and French-side communities were also in attendance.