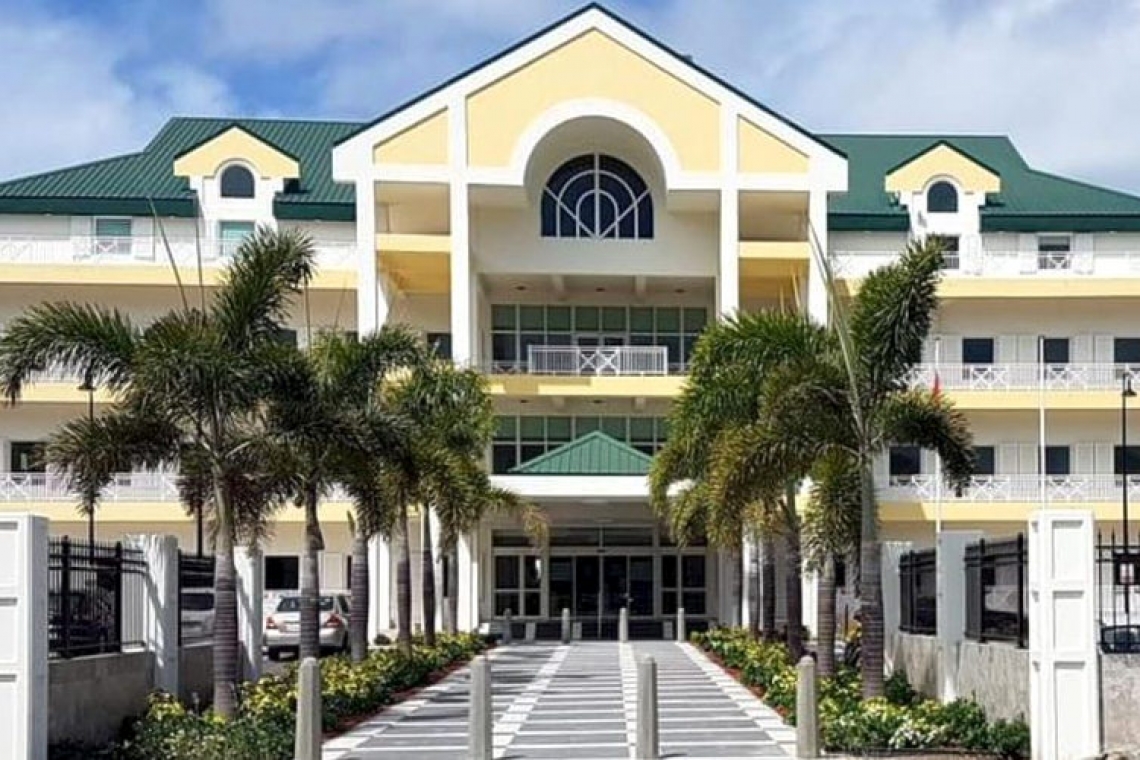 The Government Building on Pond Island.

~ Policy seems to put Govt. in chair of employer/investor ~

PHILIPSBURG--The St. Maarten Hospitality and Trade Association (SHTA) has made a firm call for the immediate revocation of government’s new policy on the issuance of labour permits as published in the National Gazette on Friday February 7.

SHTA said in a press statement that the policy change is meant to decrease unemployment and underemployment of residents. “SHTA fully aligns with the Ministry on this ambition, but stands vehemently against the policy.”

SHTA said the policy will only exacerbate the challenges of the still-ailing economy and calls on government to first consult with one of the many advisory bodies established for such purposes and with private sector associations before issuing a decree of this extent.

“All would have directly pointed to the many adverse effects of this new policy,” SHTA noted. It reminded Minister of Health, Labour and Social Affairs VSA Pamela Gordon-Carty to consult with the Social Economic Council (SER) and the VSA Ministry’s own Tripartite Committee on matters with great impact like Friday’s decree.

The policy seeks to establish a “National Employment Service Centre” that will provide candidates, sit in on job interviews with the candidates, and possibly compel employers to discuss reasons for rejecting a candidate. An arbitrary decision is then made on the granting of a work permit for foreign labour.

“With the new policy, government seems to sit in the chair of the employer/investor and run their HR [Human Resource – Ed.] Department, without bearing any risk or responsibility, and intruding in the privacy of application talks,” SHTA said in the release.

“As per the policy, government can repeat this process if the result is not to its liking, with seemingly unending iterations. Besides not providing a clear route to a work permit, this new process puts an extremely long lead time in employers’ hiring decisions when swift action may be needed to sustain the employer’s operations, and also leaves room for graft.

“No distinction is made regarding skills or education levels, nor are policy details on the length of the added process shared. There is no guarantee that the participant member of the National Employment Service Centre would even have the knowledge to evaluate whether a person is qualified for some of the jobs that normally require foreign labour, let alone have a reasonable understanding of the company’s needs and culture for which it is interviewing.”

SHTA warns that, amongst other things, the rigidity in the labour market is pointed to repeatedly as a hindrance to growth in St. Maarten economic reports by every international monitoring body.

“It is also a point SHTA has been stressing since well before [Hurricane] Irma as a cause of the lack of economic growth and the restriction of upward mobility amongst our labour force. … Instead of easing restrictions, the new policy brings additional rigidity, cost, time and bureaucracy into the process.”

The policy creates additional impediments for a private sector that has not received any assistance for recovery, unlike the wake of Hurricanes Luis and Lenny where the recovery of the private sector and thus the job market was paramount within the process, SHTA added. “This policy will cause employers to hire less and investors to invest less, resulting in a net loss of jobs. Reduction of foreign direct investments (FDI) will be another indirect effect. Next to an economic impact, a societal one will occur.

“As per the Ministry’s own numbers, 7 per cent of last year’s permits were issued to teachers and nurses; two job categories that are in global shortage and long known to be insufficiently available in St. Maarten. For an overburdened educational and care system, the new policy will make it more difficult to hire qualified and experienced personnel, bringing the quality of education and care down with it.”

Just as interesting, SHTA noted, most work permits granted last year (25 per cent) were for the adult entertainment sector. “SHTA would like to know if this industry is going to be forced to follow the same new labour rules – keeping a list of locals qualified for the job and having a government employee sitting in on the interviews. In addition, SHTA wonders if this policy applies for government when it lacks specific expertise.”

Government’s decision to further restrict the labour market is against every international advice received to stimulate the economy and increase jobs.

In 2019, 12 per cent of the permits were granted to the construction sector; just under 5 per cent were issued in the hospitality sector, hospitality being the largest industry in St. Maarten. This is a miniscule number compared to the number of jobs the hospitality sector creates and are usually reserved for specific functions or senior positions. Both sectors are likely to suffer from the impact of this policy, SHTA noted.

The policy will form an additional burden for an overburdened and financially insecure government, and will remain without achieving the desired effect, SHTA contended.

“SHTA refers to earlier, more effective initiatives by the Labour Office in reaching the target of reducing unemployment, and suggests to restart those while revoking this policy directly. Most importantly, it asks government to involve all stakeholders involved before implementing such widely impactful decisions, to avoid further economic damage during the frail recovery process.”

SHTA urges Gordon-Carty “to act without delay on this repeal.”

An alert: The health of our kidneys!