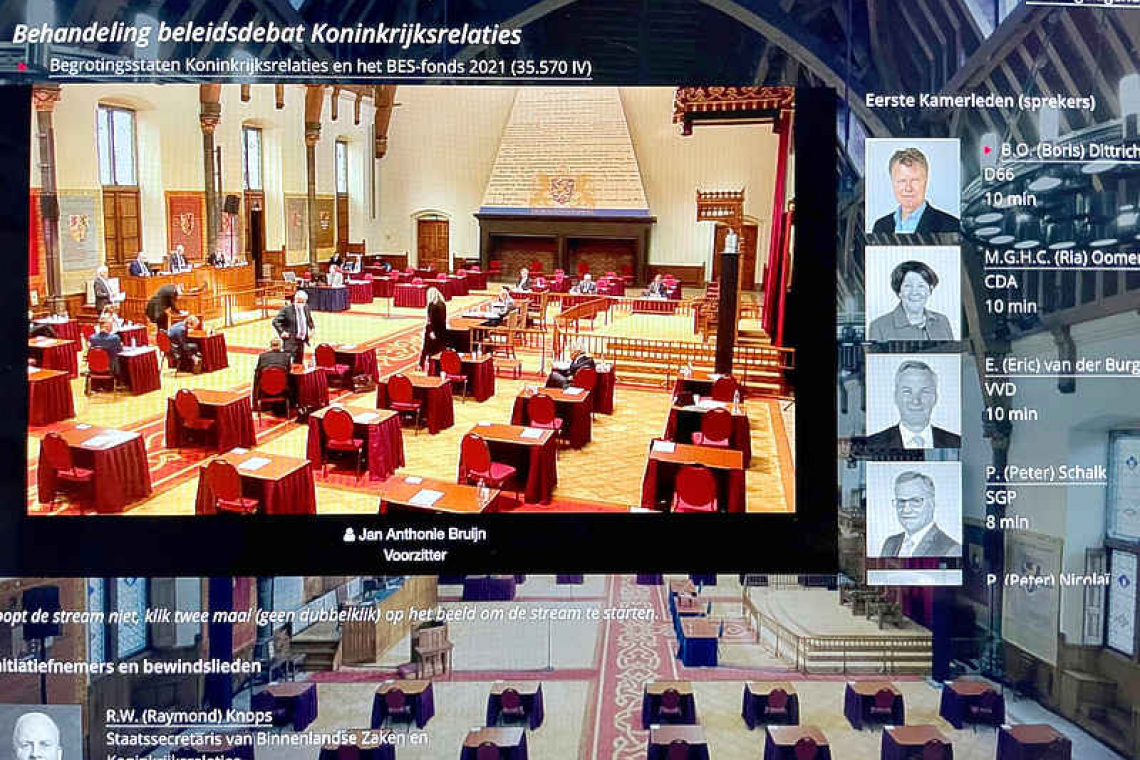 Scene from the First Chamber debate on April 6.

THE HAGUE--Inhabitants of St. Maarten should not be victims of the stand-off between the St. Maarten Parliament and the Dutch government with regard to the petition that was submitted to the United Nations, said Democratic Party D66 Senator Boris Dittrich during a debate in the First Chamber of the Dutch Parliament on Tuesday.

“It cannot be that the St. Maarten people are punished by the decision of the Netherlands to suspend the liquidity support,” said Dittrich during a debate with State Secretary of Home Affairs and Kingdom Relations Raymond Knops. He said the petition, which calls for an investigation into the Dutch government’s racist and neo-colonial handling, had taken the St. Maarten people by surprise and they had not been informed beforehand.

Knops said he was not naïve, and it was incorrect to walk two totally opposing trajectories. “The St. Maarten population is certainly not served with this.” He called the petition a “slap in the face,” especially when considering that the Netherlands was being accused of being racist and neo-colonial while attempting to help the island.

The policy debate about the 2021 Kingdom Relations budget in the First Chamber, the Senate, largely focused on the liquidity support, the Caribbean Entity for Reform and Development COHO and the tense relations in the kingdom.

Senator Paul Rosenmöller of the green left party GroenLinks said it was important for the Dutch government to be well aware of the underlying dissatisfaction the countries have experienced in the negotiations with the Netherlands and the strict conditions that The Hague tied to liquidity support. Rosenmöller said this needed to be prevented in future talks.

Referring to questions and remarks by several senators about the setting of conditions to the providing of liquidity support, Knops said it was only natural to attach conditions. He said no one likes to see conditions, but this is owed to the Dutch taxpayers, who so far have forked out the 750-million-euro bill for this exercise. He said the reforms were necessary to increase the resilience of the Dutch Caribbean countries.

He did not go into details about the COHO, as talks with the three countries are still ongoing about the follow-up to the Council of State advice.

Senator Eric van der Burg of the liberal democratic VVD party noted that the relations with St. Maarten are “not very good.” He said the petition that was submitted to the UN said more about the local politicians than about Knops. “This is not the way to do this. You cannot first sign an agreement for liquidity support and then go to the UN. That is not in the interest of the people. But ultimately, it is not our business.”

Senator Ria Oomen-Ruijten of the Christian Democratic Party CDA agreed that reforms were necessary. She said this would facilitate true autonomy, a strong economy, people being able to make an honest living and islands with a righteous culture – “rights for everyone, not only for a small group.” Oomen-Ruijten said collaboration within the kingdom continued to be important. “We are closely connected.”

Senators Dittrich and Peter Nicolaï of the Party for Animals PvdD were critical about the process to establish the COHO by kingdom consensus law. Dittrich said the process to accept the COHO was “received emotionally” and perceived by the countries as “a dictate” and “an assault on their autonomy.” Dittrich said the countries had little other choice than to accept the conditions that were part of the agreement.

Nicolaï spoke of an agreement that was forced through, imposed. He asked whether the negotiations took place under circumstances of equality and questioned the legality of the process. “Pressure was put on the countries. The Dutch government has abused its power. This is pure power politics.”

Nicolaï said the setting of conditions was allowed, as long as they were directly related to the support that was provided. In his opinion, that was not the case in this instance. Therefore, the process was illegitimate. He said the countries had to sign at the X in an agreement that dictated that the local parliaments have to adapt national legislation. “We don’t have the right to impose our will on the parliaments there.”

Recourt noted that an additional authority, the COHO, was imposed that “severely restricts the democratic mandate” of the parliaments of the three countries whereby the parliaments can be overruled on fundamental subjects.

Recourt addressed the “pink elephant in the room,” namely colonialism. Colonialism stands for exploitation and racism, and is a subject that warrants a broad, structural dialogue within the kingdom. He advocated an objective investigation into the restrictions in the collaboration that are the result of the colonial past.

“The circumstance [is – Ed.] that our kingdom is built on racism and the suppression associated with a colonial system. This loaded past to this day plays a big role, explicitly when we are accused by St. Maarten politicians that we act as colonial, racist oppressors,” said Recourt.

He called for different relations within the kingdom. The islands are vulnerable; they increasingly depend on the Netherlands. The Netherlands feels responsible, but barely has the authority to do something about it, while the Dutch Caribbean countries feel treated unjustly because the Netherlands uses methods that, in their opinion, are inappropriate.

“That is the problem in the structure that we have been avoiding many years because we see no solution. That needs to stop. Let’s sit around the table with all partners in the kingdom to discuss which tasks are the responsibility of which country.” Recourt said it was important to look forward together in the kingdom and to jointly decide where the countries wanted to go.

Senator Rosenmöller presented a motion towards the end of the seven-hour debate in which he called on the new, incoming Dutch government to give the kingdom higher priority. Several parties supported the motion, which will come to a vote in an upcoming meeting of the Senate.