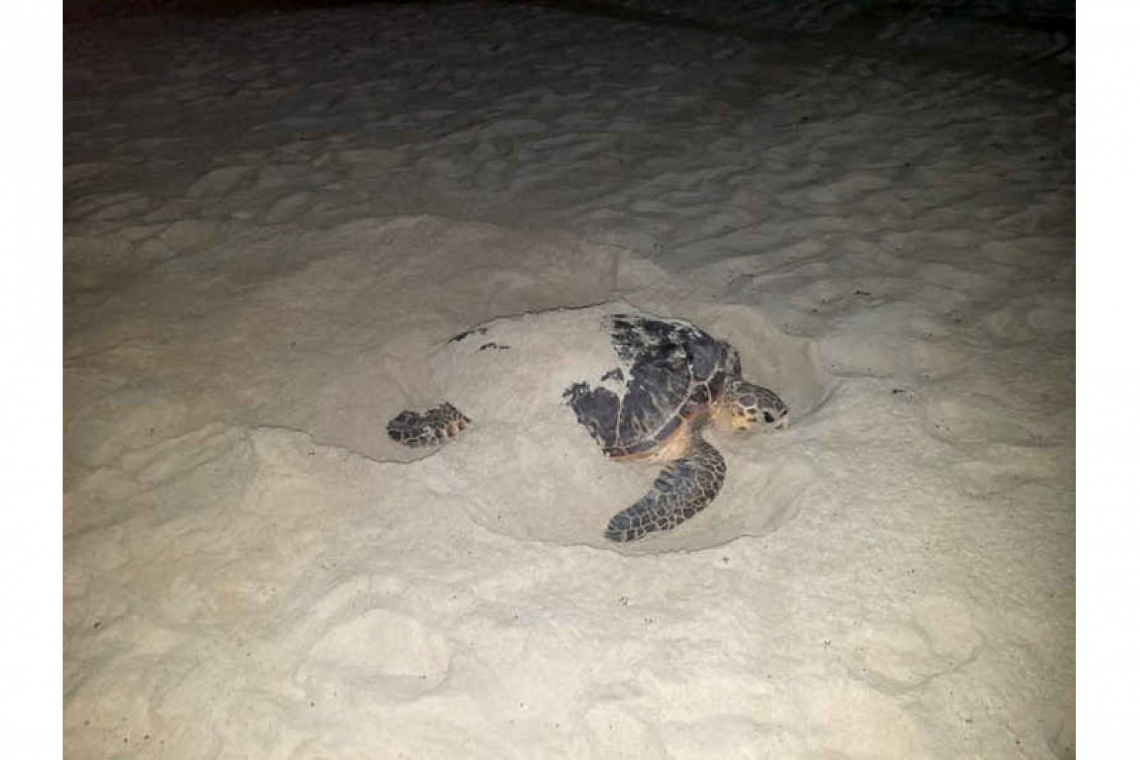 Hawksbill sea turtles nest every one to five years, coming ashore up to five times and laying a maximum of 160 eggs.

PHILIPSBURG--After receiving a call from the Westin Hotel security team about a sea turtle on Dawn Beach, a Nature Foundation St. Maarten team rushed to the scene and determined that the turtle had laid several eggs. “This is the first successful nesting activity of the season in St. Maarten.”

Nature Foundation said these are eggs of a hawksbill sea turtle. “We were very happy to see that this turtle has been able to lay at least one clutch of eggs, as nesting numbers are dropping,” said foundation manager Melanie Meijer zu Schlochtern. “We are very grateful that the security of the Westin Hotel was very cooperative and reached out to us quickly, so we could monitor the nesting activity and ensure it remains safe until the eggs are ready to hatch.”

Sea turtles are a protected and critically endangered species. Monitoring their nesting activity is crucial and Nature Foundation is the designated authority in St. Maarten to report any sea turtle nesting activity.

Hawksbill sea turtles nest every one to five years, coming ashore up to five times and laying a maximum of 160 eggs. “Unfortunately, even with the large number of eggs that are laid sea turtles only have a one per cent chance of living to adulthood,” said Meijer zu Schlochtern.

Nature Foundation staff marked the nest to ensure that it can remain undisturbed. 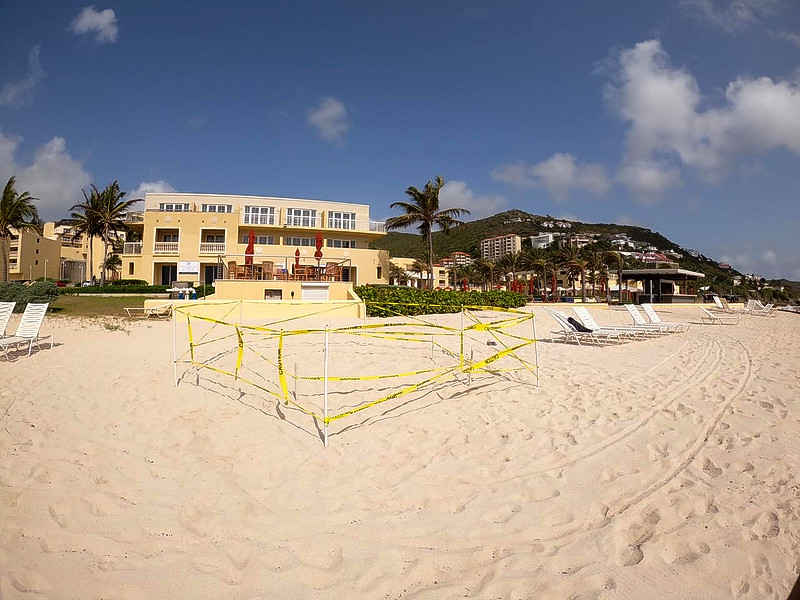 Foundation staff clearly marked the nest to ensure that it can remain undisturbed. All beach visitors are requested to stay out of the marked area to prevent damage to the eggs. Sea turtles and their nests are protected by St. Maarten law and disturbing them may result in prosecution.

Meijer zu Schlochtern said, “Eggs can be laid in a shallow nest and close to the surface of the sand. It is essential to prohibit any beach umbrellas being placed in the area, which may pierce the eggs; prevent walking over the eggs; and to ensure that there is no chance of the nest being driven over by any type of vehicle.”

The day before this nest was confirmed, video footage was sent to Nature Foundation of a hawksbill sea turtle coming a very short distance ashore on Indigo Bay and then returning to the sea after being disturbed. The reason a sea turtle would come ashore in St. Maarten is to nest. Sea turtle nesting season lasts at least from April to November each year.

In the video you can see the sea turtle coming ashore in the late afternoon and several beach visitors are in the area. The proximity of the spectators is a major deterrent for nesting sea turtles.

“While it is an amazing event to witness a sea turtle coming ashore to nest, it is essential that more space is given to ensure that they can successfully lay their eggs. While it was obviously not the intention of those in the area to discourage the efforts of the hawksbill at Indigo Bay, following our sea turtle nesting guidelines will help promote more positive nesting activity in the future,” Nature Foundation