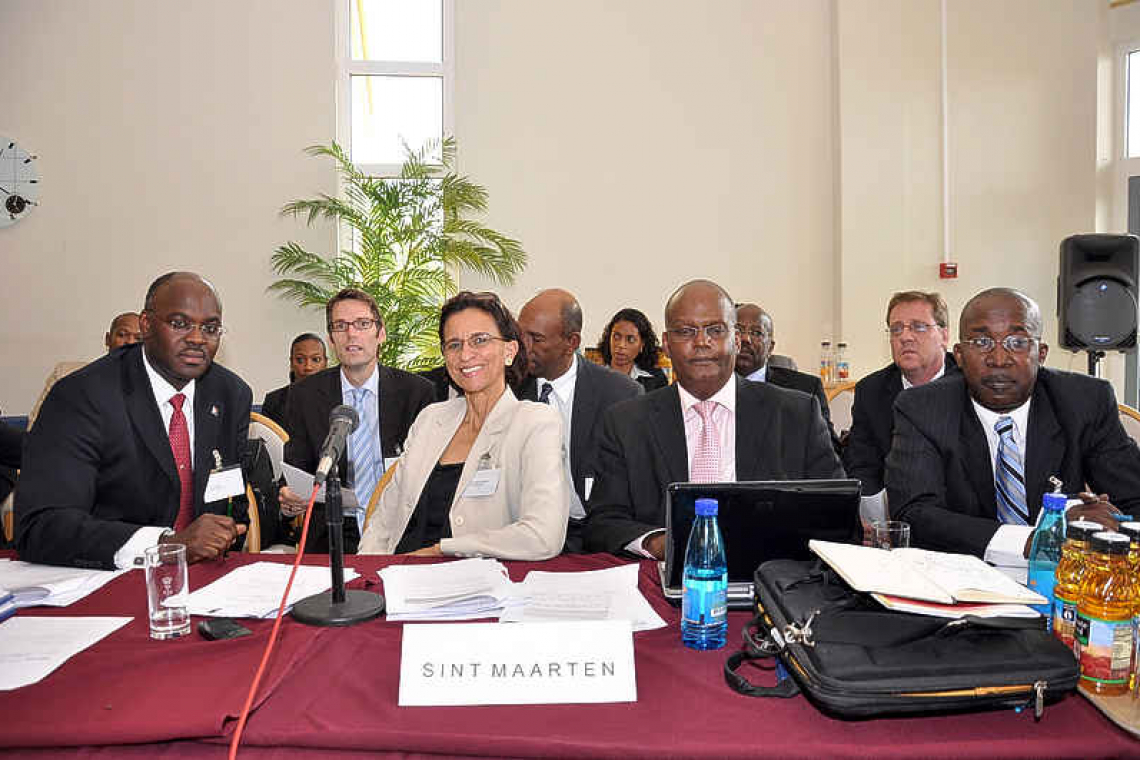 The St. Maarten delegation at the Round Table Conference in 2009. From left, front row: advisor Eugene Holiday, then Commissioner Sarah Wescot-Williams, advisor Dennis Richardson and Commissioner the late Roy Marlin.

PHILIPSBURG--She was one of the staple faces and one of the main players in the political arena when St. Maarten obtained its new status as country within the Kingdom of the Netherlands ten years ago, and today, as she reflects on where the country stands, seasoned politician Sarah Wescot-Williams believes firmly that the time has come for St. Maarten to analyse its relationship with the Netherlands and decide on a path forward.

At the request of The Daily Herald, the Member of Parliament (MP), who at one point in history served as Constitutional Affairs Commissioner, “relentlessly” pursuing “the people’s choice to become a country,” for nine of the 10 years the process took, reflected on the road to the new constitutional status and the path she believes the country should take.

Wescot-Williams said “a red thread” throughout the past 10 years has been the country’s political system and the relationship between government and Parliament, which ideally should have been where the new status was tested in terms of the rightful application of the responsibilities of those elected.

However, “with the new status, the relationship between St. Maarten and the Dutch Kingdom (the Netherlands) has now come to the forefront,” she said. “This is where the focus has been since 10-10-10. We therefore need to analyse this relationship and decide on the way forward, eventually putting the choice whether we continue as a country within the Dutch Kingdom, to the people. This, however, should not be a knee-jerk reaction to what is taking place currently between the countries.

“Personally, I think we should arrive at a short- and medium-term constitutional modus operandi for the Dutch Kingdom in order to then put the focus on a development strategy for St. Maarten. This has become even more important in the face of the global pandemic. Too much time and energy are put on the constitutional relationships, while this energy is best spent on plotting a future course for St. Maarten’s development.”

She believes that urgent attention should be placed on the constitutional adaptation to give St. Maarten’s parliamentary democracy a chance to work. “Put in simple terms, continuity of governance must replace the instability of the past 10 years. Again, ideally that should be the election of representatives, a government accountable to these representatives and to the people based on a publicised and debatable programme of a vision and actions.”

Rewinding the clock in history, Wescot-Williams said one of St. Maarten’s main goals when it was seeking to become a country within the Kingdom of the Netherlands was to have the ability to make decisions on matters that affect its people.

“The main areas where it was felt were being neglected by the government of the [former – Ed.] Netherlands Antilles were justice, health, education and taxes. The choice by the people in 2000 had a lot to do with the lack of understanding by the Netherlands Antilles for St. Maarten, following Hurricane Luis in 1995. Remember the infamous phrase: ‘Hurricane or no hurricane, St. Maarten must pay taxes?’ With the status of country, these responsibilities have become the responsibilities of St. Maarten.”

She said the new status gave St. Maarten the opportunity to better plan its own future and be held accountable for its decisions. “No longer could we hide behind – ‘the central government is neglecting the police, the tax administration and is delaying education legislation, etc.’ While I saw that as an opportunity for growth as a people, in reality it did not work out exactly like that,” she noted candidly.

“This status came with huge responsibilities, not only in the areas mentioned above, but also in the areas of foreign affairs, etc. We needed to step up to the plate in so many ways. While there were many similarities between the former islands of the Netherlands Antilles, there were also differences in the economies, education, spheres of interest, languages, etc., making blanket solutions very contentious. Imposition of the turn-over tax was such an issue.”

The MP remembered that the referendum in 2000, where the population made a choice to go for separate status, had been in the planning for several years and had been postponed twice, before it eventually occurred on June 23, 2000. “Negotiations started immediately. However, the Netherlands wanted no part of it. This went on for the first five years, until all islands had their referendum and the Netherlands had no choice but to entertain the negotiations,” she recalled.

“The negotiations were long and tedious, and adjusted along the way with all representatives fighting for their respective island. These negotiations also took up a lot of time. Our organisation locally, albeit small, was dedicated and committed. The political powers of the day were in agreement with the new status and that contributed greatly to St. Maarten’s persistence over the years.”

“We are still busy with the one on justice,” she notes. “We also were very much tied to concordance where our laws were concerned. There was not much room or time for creativity or out-of-the-box thinking: take, for example, our electoral law(s) and the law on the Constitutional Court.”

She made clear the talk that St. Maarten received debt clearance going into 10-10-10 is not factual. “In my capacity as Commissioner for Constitutional Affairs, I relentlessly pursued the people’s choice to become a country leading up to the referendum, through the referendum and for nine of the 10 years, from the referendum to 10-10-10, with a defining moment being the final conclusions of November 2006. The final conclusions were temporarily suspended for St. Maarten to get at least a symbolic part of the debt clearance,” she said. “I continue to cherish those years as the longest time that St. Maarten was able to hold on to a vision, never giving up until the goal was reached.”

When asked about the sections of the community who are not so happy with the state of the country under its current status, she said: “The discontent, in my opinion, has a lot to do with the governance of the country overall and the lack of continuity and cohesion.”