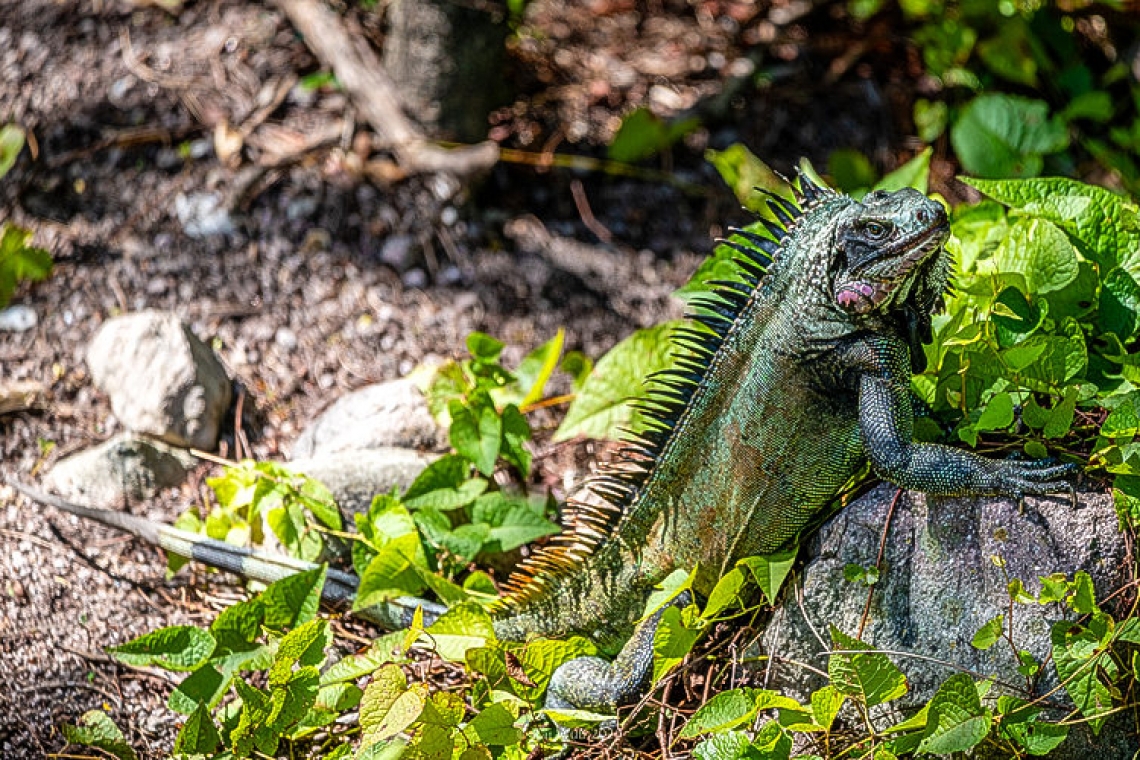 SABA--Saba’s black melanistic iguana has been recognised as an endemic species. Although Sabans have a somewhat ambivalent relationship with their local “dragon” which is known to ravage carefully tended vegetable gardens, it arguably was on the island long before humans and thus can claim its indigenous right of peaceful coexistence.

As one of the results, the painted black (Iguana melanoderma), locally known as Saba black iguana, is now officially considered a separate species, endemic to Saba and Montserrat.

The recognition of the endemic iguana species will undoubtedly contribute to Saba’s distinction as a nature and ecotourism destination, but at the same time scientists are warning that the melanistic black iguana is under threat.

Threats include unsustainable harvesting, including pet trade, and both competition and hybridisation from escaped or released invasive alien iguanas from South and Central America.

So far, there are three species of iguana known in this area of the Caribbean. The Lesser Antillean iguana (Iguana delicatissima), an endemic species found on very few islands, including St. Eustatius, is highly endangered.

Two introduced species of iguanas are also found on the islands: the common iguana (Iguana iguana) from South America and the green iguana (Iguana rhinolopha) from Central America. Both are threatening the endemic iguana species.

The described species on Saba and Montserrat is characterised by a distinctive black spot between the eye and the ear cavity. Juveniles and young adults have a dorsal carpet pattern; the coloration darkens with aging, except for the anterior part of the snout.

Scientists describe the common melanistic iguana from Saba and Montserrat as a new taxon and aim to establish its relationships with other green iguanas. That can help conservationists to accurately differentiate this endemic lineage from invasive iguanas and investigate its ecology and biology population on these two small islands that are subject to a range of environmental disturbances including hurricanes, earthquakes and volcanic eruptions.

“Priority actions for the conservation of the species Iguana melanoderma are biosecurity, minimisation of hunting and habitat conservation. The maritime and airport authorities of both islands must be vigilant about the movements of iguanas, or their sub-products, in either direction, even if the animals remain within the same territory.

“Capacity-building and awareness-raising should strengthen the islands’ biosecurity systems and could enhance pride in this flagship species,” stated lead researcher professor Grandjean of University of Poitiers, France.

The group of scientists was not the first to point out the importance of protecting the Saba iguanas. Initial efforts already started with Robert Powell who authored the book The Reptiles and Amphibians of the Dutch Caribbean, with co-authors Robert W. Henderson and John S. Parmerlee Jr.

In 2017, the Saba Conservation Foundation (SCF) erected signs around the island to raise awareness about Saba iguanas on the road.

The key stakeholders in conservation efforts for the area are the SCF, Dutch Caribbean Nature Alliance (DCNA), the Montserrat National Trust (MNT) and the United Kingdom Overseas Territories Conservation Forum (UKOTCF), which, the research team hopes, could take measures to protect the flagship insular iguana species, mainly against alien iguanas.