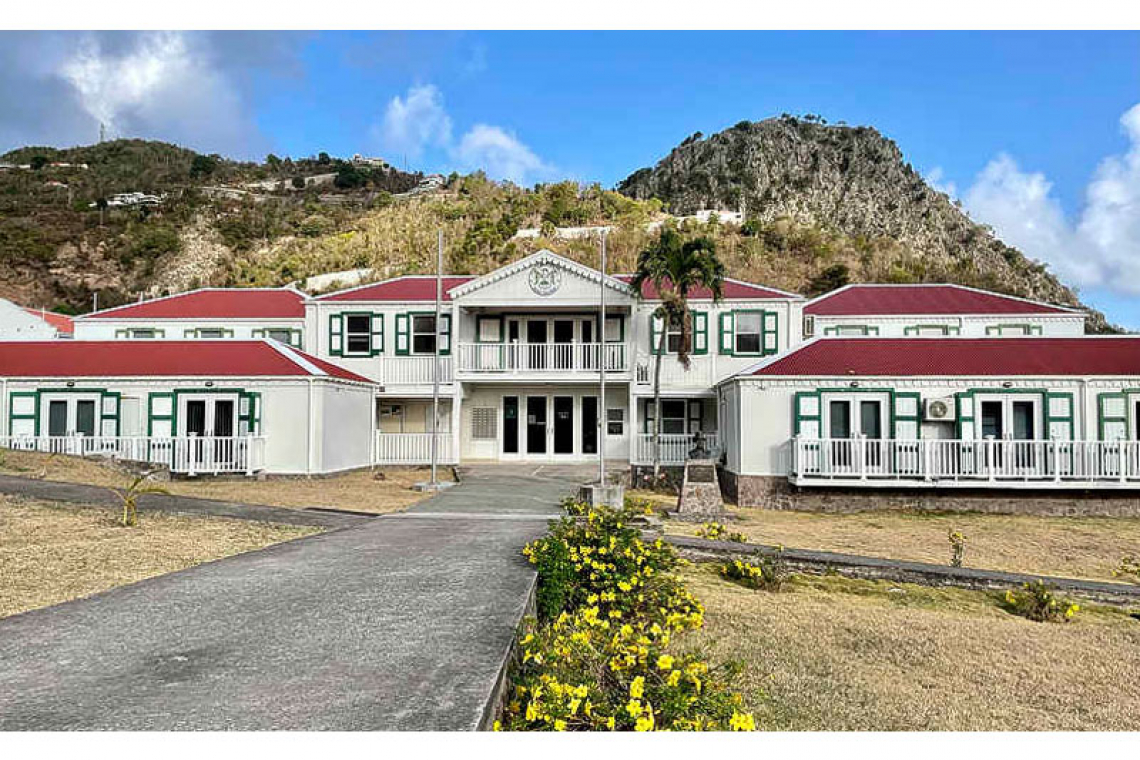 The Government Administration Building in Saba.

SABA--The public entity Saba this week was forced again to submit a skeleton budget to the Committee for Financial Supervision CFT due to the lack of structural funding to cover the local government’s operational cost.

Because the free allowance (“vrije uitkering”) has not been substantially adapted to the current situation, Saba for the second time in a row was faced with a skeleton budget, but because the financial law FinBES prescribes a balanced budget, the draft budget was made balanced by covering the deficit with the general reserve.

According to Finance Commissioner Bruce Zagers, this will further weaken the liquidity position and will put an immense strain on the government’s ability to function in a responsible manner.

“For several years the financial problems that the public entity Saba faces are known. This has been confirmed by the CFT, by the auditor Ernst and Young and in various other reports. The unfavourable liquidity position of the Saba government is also widely known and has been documented in various reports,” said Zagers.

The Island and Executive Councils have indicated multiple times that with the level of the current free allowance, the Saba government cannot properly execute its legal tasks that were agreed on with the Dutch government in the past. In due time, this means certain tasks will no longer be able to be executed. According to the Saba government, it is impossible to continue executing at an acceptable level, tasks that have been intensified over the years.

“Incidental funds for projects that have structural cost have negatively impacted the financial position of government and the budget. Because of this, many of these initiatives are now at risk and may need to be stopped,” said Zagers.

Over the years, with less capacity and resources, Saba has done “everything required” to maintain a high standard of financial management. However, the public entity can no longer function in this manner, said Zagers.

“There is nothing left to cut in the budget. Some departments have seen their staff cut back. This comes at the cost of the quality of the output being produced. Maintenance of buildings and roads is now being neglected because of the lack of funding.”

The Island and Executive Councils believe this situation cannot continue. The neglecting of tasks is a real threat due to the lack of structural funding from The Hague. Saba and the Netherlands always work together constructively, but an urgently needed solution to this matter has yet to materialise, Zagers said.

As a representative of the public entity Saba, he has become “increasingly frustrated” with watching the National Department Caribbean Netherlands RCN function without any financial limitations. “Whether it be with an exorbitant number of employees, or through their investments, the local government can only watch as it struggles to keep services operational,” he said.

Zagers was also critical of the disparity between salaries for equal positions, which, in his opinion, proves that a superior government, one which has replaced that of the former central government of the Netherlands Antilles, exists in the Caribbean part of the Dutch Kingdom.

“Although the Executive and Island Councils feel it necessary to pay a liveable wage and provide employment opportunities with benefits equal to those offered by RCN, the local government is not in a financial position to do so. There is no way that the needed structural increases for salaries will be possible under the current poor financial situation,” he said.

Zagers said Saba is “certainly grateful” for the assistance by the Dutch government over the years and for the funding that is still in the pipeline. “Investments in a new harbour, amongst many other projects, cannot be overlooked and show the commitment of the Netherlands.”

Furthermore, investments were made in education and healthcare, but, added Zagers, the local government, for example, is not in a position to carry out modest maintenance to school buildings, and the investments that were made in waste management are resulting in structural cost that is far greater with the majority of recycled waste being exported.

“We hope that with the formation of a new Dutch government, there will be the necessary political will to make these changes. Eleven years after the constitutional transition we should not continue to be in such a position.

“Saba has proven to be a trustworthy partner. We have proven to do what has been required with less resources and less capacity. And although we appreciate all the incidental money that has gone towards improving Saba, it has come to a point where we feel that the structural needs are being neglected by the national government,” he said.