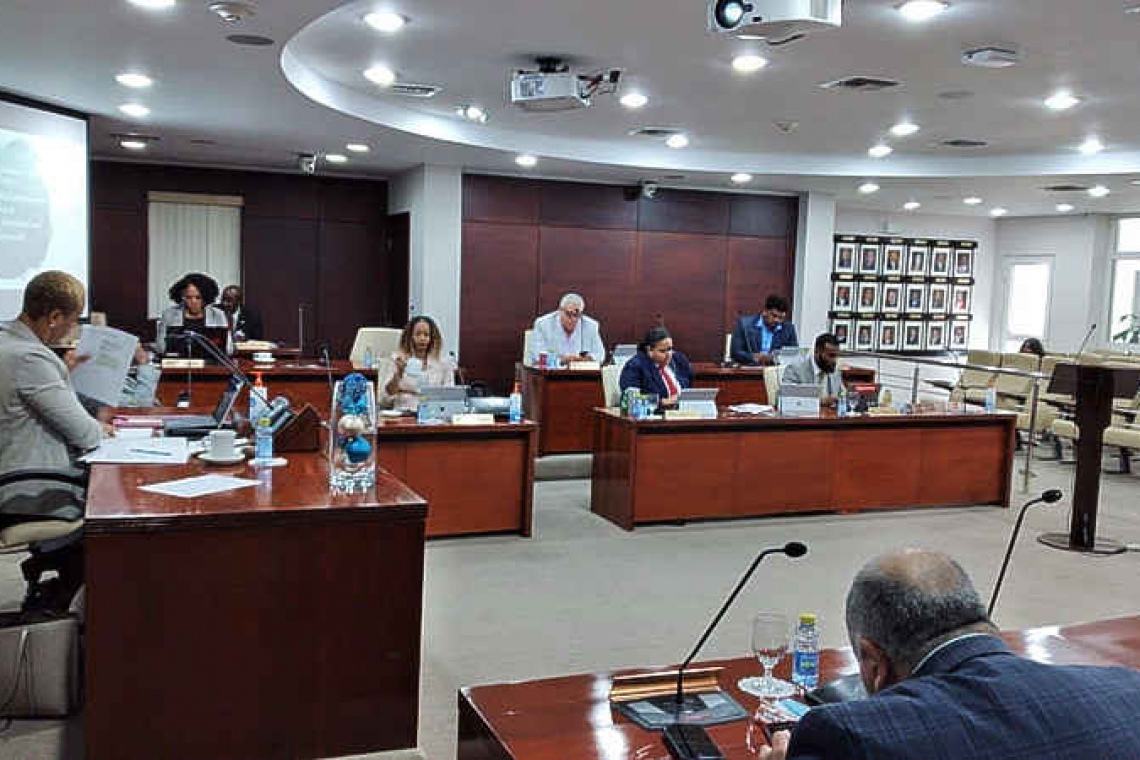 This came out during an extensive presentation Richardson gave to Parliament’s Justice Committee.

Richardson said overtime payments have recently been grossly above the Justice Ministry’s budgeted figures. Overtime pay was budgeted at roughly NAf. 3.3 million in 2018 and 2020, while some NAf. 3.2 million was slated for 2019. The Police Force’s overtime pay was booked at NAf. 2.1 million in each of these years, about two-thirds of the total amount.

Richardson told Members of Parliament (MPs) that the situation had arisen because police management was unlawfully handling overtime payments and on-duty stipends, known as “piket” in Dutch.

“It was brought to my attention that overtime compensation was not being handled under the legal framework by the different executive departments. The ministry’s financial controllers were continuously being requested to sign-off on overtime sheets that were not transparent, but also stated higher fees than what is legally allowed,” she said. “Though I recognise, with personnel challenges, it was decided by management to override this clause, this still remains unlawful.”

The illegal overtime payments included high-ranking officers, said Richardson. “The law specifically states that persons in scale nine or higher are not eligible for overtime, but that of time-back. Nevertheless, the overtime requests included persons who are in scale nine and higher,” she said.

The ranks placed in scale nine or above include inspectors, chief inspectors and chief commissioners, according to the 2011 National Decree on the Legal Rights of Police Officers, known in Dutch as the “Landsbesluit Rechtspositie KPSM”.

Richardson said she had issued a memo to Justice Ministry department heads on September 8 to limit spending. For police, this meant that overtime was capped at 20 hours per officer. If an officer were to exceed the limit, it would have to be motived with supporting documents signed by police management.

Richardson told MPs that police management later submitted a nine-page objection to the memo, which she submitted to government’s Legal Affairs Department for advice. She said the department had ruled in favour of her memo.

The justice minister also characterised the use of on-duty stipends as unlawful, citing that some high-ranking officials have been claiming piket for each day in the month. “This accumulates to over NAf. 2,000 per month, in addition to monthly salaries. There is no legal basis supporting this practice; therefore, it is unlawful,” she said.

Police spent more than NAf. 100,000 on food and drink between April and May, Richardson said, adding that the “invoices are still coming in”.

“I found it to be deeply worrisome because, as a ministry, we are not in a position to afford this, nor can it be sustained. Therefore, I deem it necessary to terminate all contracts with restaurants and supermarkets that provide such services.

“I understand that it perhaps may have been especially practical to do things in this way, but I also know there were viable alternatives that were much more affordable. Moreover, providing meals for staff members during crisis is not mandatory, nor is it written in any legislation,” said Richardson.

She told MPs that she is concerned about the ministry’s spending habits and surging costs, especially “disproportionately high food bills and overtime payments.”

“As minister, I am responsible and must account for the high costs of these expenses and the financial burden on the country’s overall coffers, especially in these current times when the government of St. Maarten is facing dire financial constraints,” said Richardson.

Mauricia pointed out that the high food bills were not the product of police alone, but included the Royal Dutch Marechaussee KMar, Customs, the Royal Dutch Marines and the St. Maarten Volunteer Corps VKS. The members of these entities were all assisting police in maintaining public order and safety and enforcing government’s stay-home measures.

“A police officer … cannot walk into a restaurant and strike a deal without this being approved by KPSM management [who – Ed.] in their turn had to get the green light from the justice financial controller to order meals. Knowing our management team in these types of situations, they always document their findings to seek approval. If they do not receive approval, it will communicate to the workers,” he said.

Mauricia also said that Richardson is unfairly placing blame for overtime payments on the police, when it should be recognised that the Police Force is severely understaffed.

KPSM requires approximately 380 officers to effectively carry out its tasks, according to a 2016 report by the St. Maarten Progress Committee. Currently there are about 220 officers wearing a KPSM uniform, or only 57 per cent of its optimal operating strength.

“Police officers are being blamed about the high amount of overtime. They did not make the shortage in the [Police] Force,” he said. “Stop with the blaming game now, once and for all. Come out clean and tell the members and their unions what really is the problem.”

Independent MP Christophe Emmanuel asked about unpaid vacation pay in 2020 and the plans for vacation pay in 2021, while United St. Maarten Party (US Party) MP Claudius “Toontje” Buncamper asked a series of questions about piket.

During his speaking time, UP MP and Parliament Chairperson Rolando Brison called on Parliament to increase the Justice Ministry’s allocated funds in the 2021 budget.

The meeting was adjourned until further notice after the first round of questions. Richardson is to answer the questions posed by MPs when the meeting resumes.