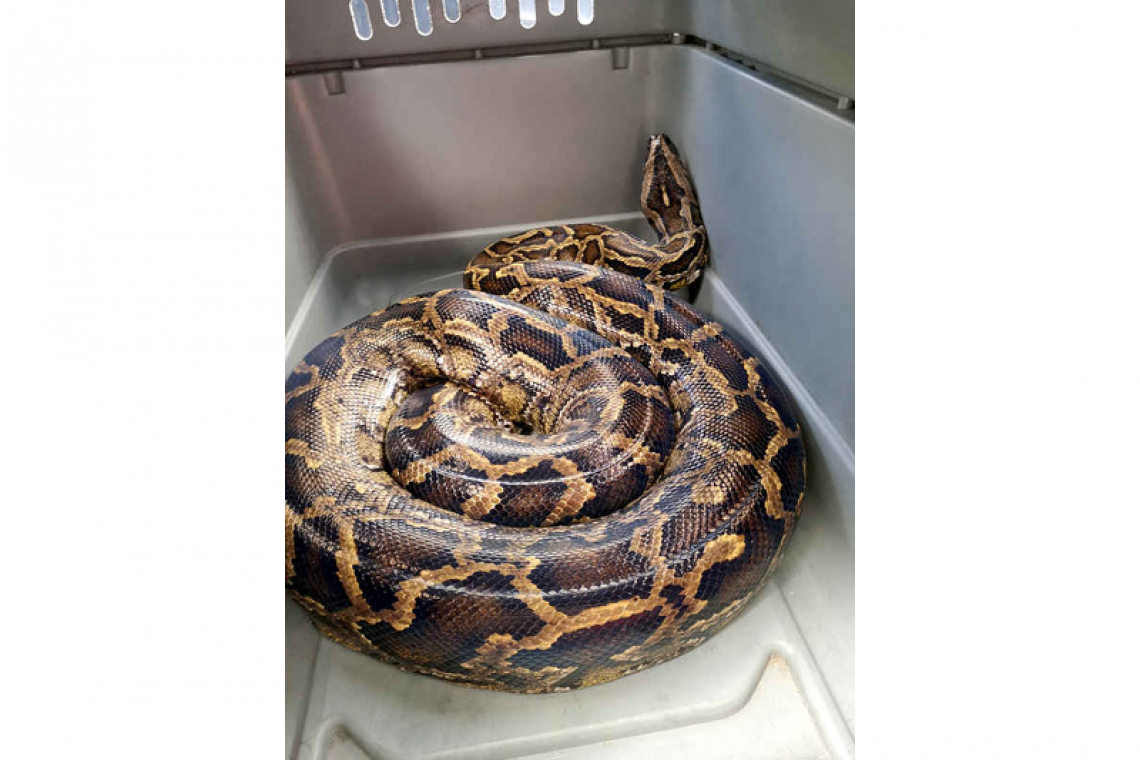 The almost-four-metre-long snake was removed from a residence on Tuesday.

PHILIPSBURG--St. Maarten Nature Foundation says the large python snake seized by the police poses a high risk to the environment and native species of St. Maarten.

The Nature Foundation assisted the police and Prosecutor’s Office on Tuesday, December 15, to take a large Burmese python which was kept as a pet in a small enclosure.

“According to the ‘Algemene PolitieKeur’ [General Police Ordinance – Ed.] Article 29, it is prohibited to keep wild animals without a permit of the minister. Therefore, the prosecutor decided to seize the snake,” warned the foundation in a statement on its website on Wednesday.

“Besides, there are high risks to the environment and native species if the snake escapes or is (accidentally) released into the wild. Pythons can easily eat birds, mammals, other pets or bite humans.”

The foundation noted that if the snake had escaped or had been released, it could have seriously damaged the native species on St. Maarten. The main concern is to prevent ending up like Aruba, which has a large problem with the invasive boa constrictor population.

The boa constrictor is not a native snake on Aruba, but specimens up to two metres long are captured nearly every day. The foundation said that most likely irresponsible owners of pet boa constrictors had released their animals in the wild, causing the population to settle.

Boas are fast breeders and adapt well to the environment, causing snakes to show up everywhere in Aruba. The foundation noted that these snakes have no natural enemies on islands such as Aruba and St. Maarten, with no means to keep populations in check. The bird population is particularly at risk due to pythons and boas.

“Besides, a loose snake can cause danger to the safety of our people, as it can eat small pets; it could attack people and bite them, which is quite painful,” the foundation added.

Burmese pythons kill by constriction, grasping a victim with their sharp teeth, coiling their bodies around the animal and squeezing until it suffocates. They have stretchy ligaments in their jaws that allow them to swallow all their food whole.

The foundation said the confiscated python is healthy and very docile as it is used to being handled as pet since young, but noted that behaviour can change when released or when the snake is hungry.

“The owner has been given a chance by the prosecutor to find a new legal and humane home for the snake outside our island; the Nature Foundation is willing to assist. As the python grew up in captivity, zoos in other countries could be a feasible home. People who know a viable option can report it to the Nature Foundation via

This email address is being protected from spambots. You need JavaScript enabled to view it.,” the foundation advised.

“Wild populations of Burmese pythons are considered to be ‘threatened’ in their home countries; therefore, the species is listed on Appendix II of CITES (Convention on International Trade in Endangered Species of Wild Fauna and Flora).”

According to the convention, bringing a snake to St. Maarten without the proper CITES export permit is considered illegal and part of the illegal wildlife trade. To leave the country of St. Maarten the Burmese python needs a CITES re-export certificate, but permits can only be issued when in line with the CITES convention.

According to the foundation, the Burmese python is one of the largest species of snakes. It is native to a large area of Southeast Asia, but is found as an invasive species elsewhere. The snake is famous for its invasion in the south Florida Everglades and is now established there as a population.

This python is also popular for the pet trade. The importation of Burmese pythons was banned in the United States in January 2012 due to its negative impact on the native species in that area, as birds, foxes and rabbits disappear from areas invaded by this python and populations of deer, raccoons and coyote are threatened. This python eats mainly birds and mammals. It is often found near human habitation due to the presence of rats and mice as a food source.

The foundation said the International Union for Conservation of Nature (IUCN) has recently listed the Burmese python as “vulnerable”, reflecting its overall population decline. Important reasons for the decline are trade for skins and for food; habitat degradation may be a problem in some upland areas.

“The Nature Foundation is not an enforcement entity; however, they do have responsibilities regarding nature management,” stated the foundation.

The Nature Foundation is the scientific and management authority related to the marine and terrestrial ecosystems of St. Maarten and, specifically, introduced species and species management, appointed by the Minister of Public Housing, Spatial Planning, Environment and Infrastructure VROMI. This includes responding to environmental incidents and species management of invasive species such as snakes.