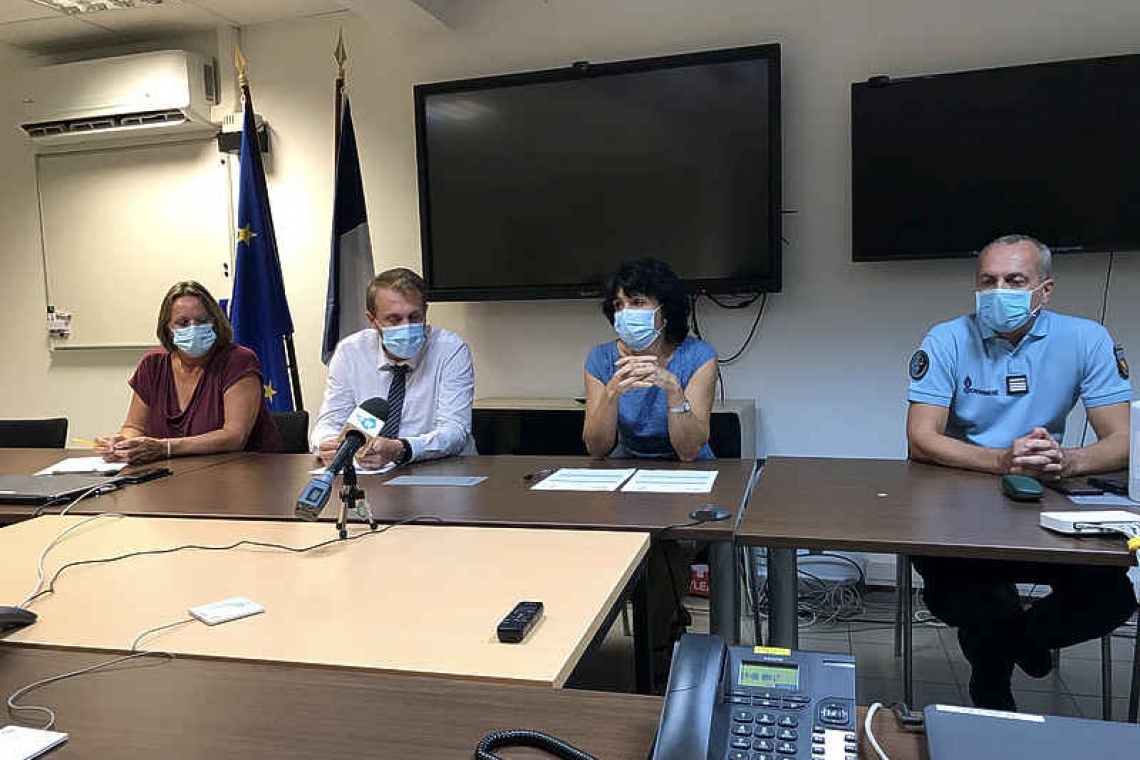 MARIGOT--Préfète Déléguée Sylvie Feucher disclosed at a press conference Wednesday that she has imposed an order for residents of Guadeloupe and Martinique who have vacationed on the Dutch side of the island or have transited through St. Maarten to present a negative polymerase chain reaction (PCR) test taken less than 72 hours earlier when they check in at Grand Case Airport for their return home.

Posters to this effect will be displayed at the airport. This comes as Guadeloupe and Martinique threaten to close their borders to the island if the increasing number of COVID-19 cases on both sides of the island is not reduced considerably.

Feucher said she had been informed of this intention by the Préfet of Martinique who could restrict access to both islands for travellers coming from St. Maarten. The matter is under discussion.

Feucher said she wanted to avoid at all costs a return to the strict inter-island travel restrictions that were imposed on French Guiana and Mayotte, noting it would have “grave social and economic consequences.”

She reinforced her message to the population to restrict movement for essential reasons and continue to respect the hygiene barrier measures. She noted there have been too many trips to the Dutch side “for the wrong reasons.”

“We have to get the COVID numbers down quickly and that means every single person playing their part,” she said. “I know how difficult it is for families. The border control is temporary, but the economic problems will continue. If we don’t take this seriously and get it under control now, we are going to kill the tourist season.”

Asked whether there will be a shutdown again, she said, “No.” Questioned on the cooperation with the Dutch side, she said she had spoken with Prime Minister Silveria Jacobs during the weekend. “Closing night clubs and bars was a good decision, but a bit late,” she added.

She thanked the Gendarmes and the Border Police PAF for their patience working under difficult circumstances. Gendarmerie Commandant Stéphan Basso noted there have been instances where false attestations from the Préfecture and a false Form C from the Dutch side have been presented at the controls and these people have been punished.

He also disclosed people have tried to pass through on the trails of Bellevue, notably a Quad tour operator from the Dutch side with clients. It was disclosed that a Dutch-side-registered boat with a captain from St. Martin had been arrested in St. Barths over the weekend for attempting to transport 10 American tourists to St. Maarten.

Basso said controls of restaurants have shown that protocols are mostly being respected, the same for authorisations for gatherings, but controls will be intensified. One exception was a bar that was given a warning for showing a semi-final football match with about 40 fans not wearing masks.

While Feucher is convinced that border-control is the way to reduce virus spread, she expressed some frustration that this responsibility is left to the Gendarmes only, which is not their “main function.” She appealed to the Dutch-side police KPSM to share some of the load. It was also a question of security, particularly at night on a fast stretch of road.

Feucher did not get into the subject of how the current situation is going to impact the return to school, only two weeks away, around September 5. Neither the Collectivité nor National Education have communicated on this so far.