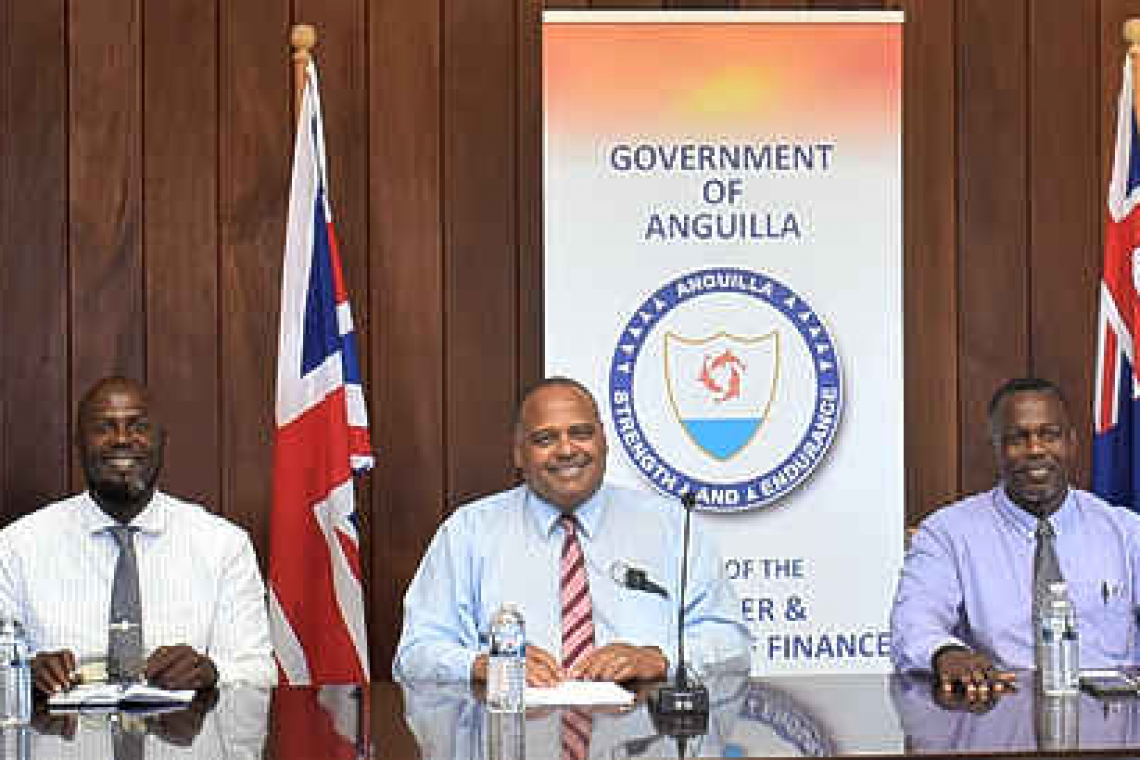 ANGUILLA--Premier Ellis Lorenzo Ellis began the government’s weekly press conference on Monday, July 4, with a recap of recent events within his ministry, to include the approval of amendments to the Goods and Services Tax (GST) during the House of Assembly on Thursday, June 30, and the re-joining of Minister Dee-Ann Kentish-Rogers to the government on July 4, following her short-lived resignation on June 30.

Webster said, “This morning, [Monday – Ed.], we welcomed back Minister Dee-Ann Kentish-Rogers, who has come in and has decided that she wants to do the work in the Ministry of Education and Social Development for the people of Anguilla. I want to thank her for that and certainly we continue to move forward as a team with one intent: to look out for the people of Anguilla and especially the youth, where we invest in them and they feel they have ownership in this country of ours.”
The premier introduced Quincia Gumbs, who earlier in the day was sworn in as Minister for Sustainability, Innovation and the Environment, as well as Merrick Richardson, who was also sworn in earlier in the day as Parliamentary Secretary responsible for Sports, Troubled Families, Probation and Renewal Energy Innovation.
Responding to a press query as to how he had been able to reach out to Kentish-Rogers, resulting in her rejoining the administration, Ellis said, “Even before her resignation, there were concerns about the GST and its implementation. Certainly we know the tax act was passed a year ago in July 2021 with Inland Revenue and Customs working to implement it with the least invasive impact as they could.” He said, “Where we have had philosophical differences, we’ve worked those out and we do know that the intent is good. She has voiced that, and we as a party will continue to work with the people, for the people.” The premier added that he has also reached out to the resigned Minister Kyle Hodge, who did good work while in office.
Webster said GST had been introduced mid-year and several GST fees had been removed from a variety of zero-rated and exempted items. He said, “It is anticipated that as the economy improves, there will be more activity and therefore more revenue coming in from the GST. We are hoping that that will get us to the EC $80 million that we anticipate it will bring in. This year was hoped to be EC $29 million, given that we started it late in the year and at a time when tourism is at its lowest point. We anticipate that as the economy improves, GST will bring in more. GST puts in place a framework where we can predict what the revenue will be.” He added that they will continue to review the GST and if it gets to the point that it is not working then we will have no choice but to repeal it, but we have to give it a chance to work.
It was noted that as many businesses continue to fine-tune the correct pricing of goods and receipt annotations, customers are asked to check their receipts for accuracy and report billing issues to the Revenue Department. The government does not view the implementation of GST as a deterrent to tourism as it is noted that many similar robust tourism destinations have higher GST/value-added tax (VAT) percentages than the 13% adopted in Anguilla.
Minister Hughes stated that advance hotel booking for the 2022-2023 tourism season is strong and visa applications of persons wishing to participate in the upcoming Carnival festivities, with special emphasis on attending the Caribbean Beach party, the largest beach party in the region held on August Monday, continue to escalate. He briefed that construction on the Blowing Point terminal continues on time and a December opening is expected. The new Road Bay cargo jetty has been turned over to the Anguilla Air and Sea Port Authority (ASPA), and work continues to secure the cargo area and identify cargo off-loading locations until warehouses are funded and constructed.
The frequency of the government’s press conference has been adjusted from weekly to the first and third Mondays of each month.