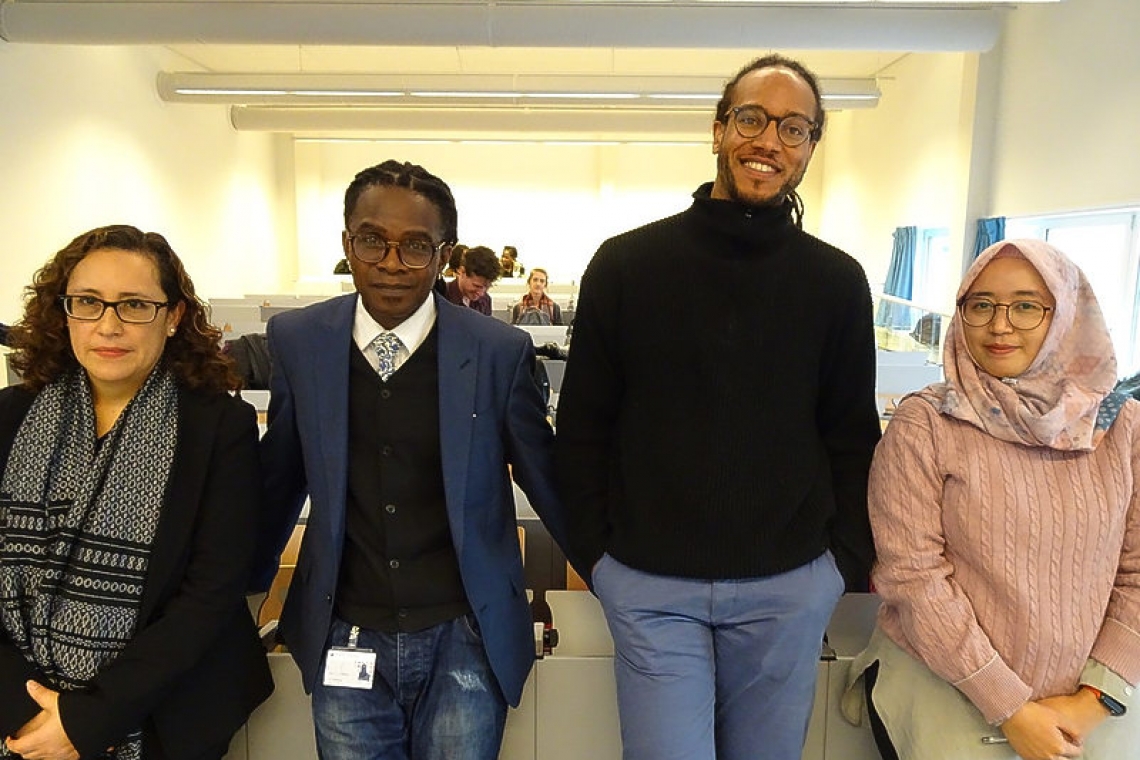 LEIDEN--Post-coloniality and decoloniality were the main themes of a symposium at Leiden University on Friday where one of the speakers was former President of University of St. Martin (USM), social and cultural anthropologist, and researcher at Royal Netherlands Institute of Southeast Asian and Caribbean Studies KITLV and University of Amsterdam Dr. Francio Guadeloupe.

Organised by Tibisay Sankatsing Nava and Joseph Sony Jean of KITLV and Leiden University, the one-day symposium discussed the Caribbean responses to the global debates on decolonisation of academic research and explored the concepts of post-coloniality and decoloniality in the context of research in the social sciences and humanities.

“Although there is a link to undoing the wrong western imperialism wrought, with decoloniality and post-coloniality, the link is looser and so too the relation to activist groups,” said Guadeloupe.

Decoloniality and post-coloniality in his work referred to the ethnographic study of “moments of freedom and its dissemination and encouragement to undo violent and oppressive modes of becoming” and the study with a focus on “the haunting of past temporalities and ways of being on current conditions of existence in the lands of the colonised and colonisers.”

The Caribbean post-colonial theorising is best exemplified by the writings of David Scott: “It is our post-colonial questions and not the answers that demand our critical attention.” According to Guadeloupe, Scott’s work engaged in a “typical anthropological move with post-coloniality whereby the raising of new questions is the ideal outcome of ethnographic fieldwork.”

Guadeloupe noted that in Scott’s opinion, resistance of the colonised was always, in one way or the other, complicit with the colonial power it sought to overthrow. “How could it be otherwise when colonial ideas are part and parcel of the subjectivity of the most critical post-colonial subject?”

The Caribbean, said Guadeloupe, is a multiple series of relationships, and the Caribbean Sea is not an American lake. “It is the statuary of the Americas. The Caribbean invites us to think not only about ourselves as estuaries, meaning to consider every inside perpetually being undone and redone by an outside.”

The inside consists of our Caribbean lands, and our senses of selfhood, tied to our bodies which are historically linked to these island soils, Guadeloupe clarified. The outside refers to the Caribbean Sea connecting up with other waterways and their bio-rich sediments, but also to geopolitical and geo-cultural flows.

“To be Caribbean is to play at being Caribbean. What this means is that the common-sense understanding of the Caribbean as the archipelago of islands in the Americas is solely two sets of iterations with more fact value than others. One encounters other, less acknowledged iterations of the Caribbean in Brooklyn, Brixton and Amsterdam,” said Guadeloupe.

One of the other speakers at the symposium, all of whom had delivered high-level contributions, was Martinique-born Dr. Malcolm Ferdinand. Ferdinand, a researcher at the National Centre for Scientific Research CNRS of University of Paris Dauphine, spoke about the “double fracture” between colonisation and the environment in which he addressed the suspension and ties between colonial times/slavery past and ecology.

Friday’s symposium was well-attended, mostly by university students and persons with a Caribbean connection.