Parliamentary secretary reports back from COP26 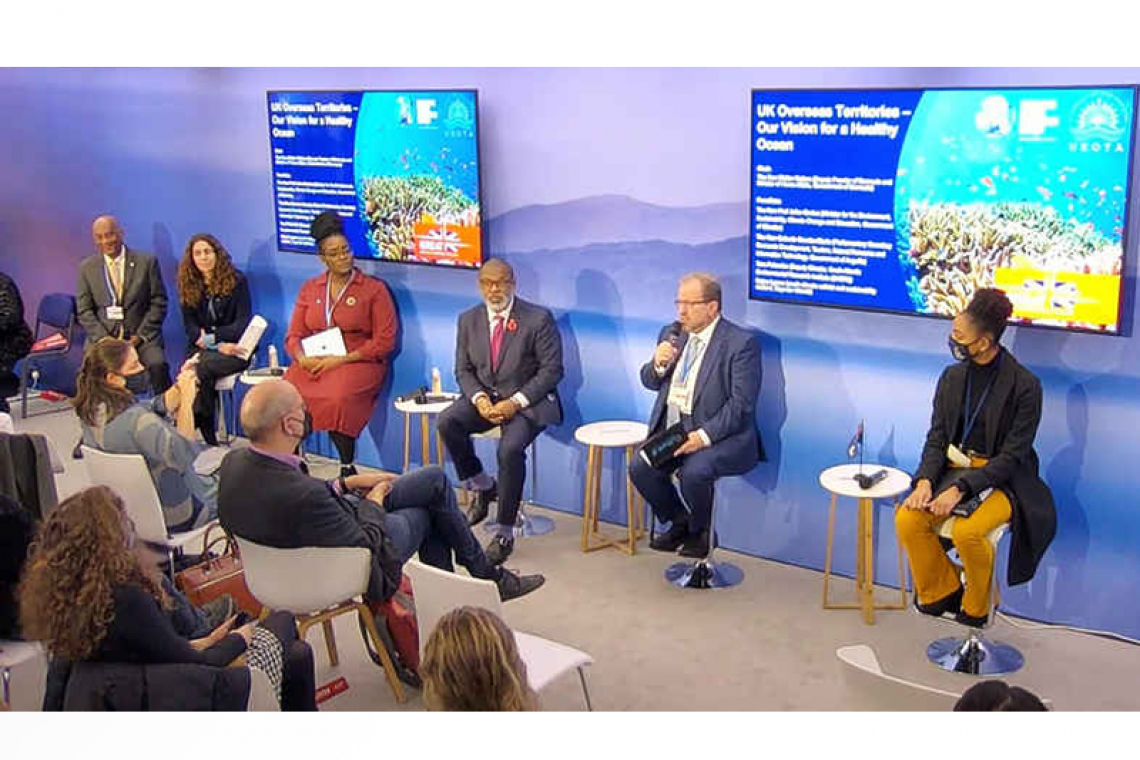 Panel for “Our Vision for Healthy Oceans” with Parliamentary Secretary Quincia Gumbs-Marie third from left.

ANGUILLA--Parliamentary Secretary Quincia Gumbs-Marie reported from her attendance at the UN Climate Change Conference COP26 meetings in Glasgow, Scotland. She said it was a packed few days but she made many useful connections. Along with other representatives from the UK Overseas Territories (OTs) she has been speaking with many non-governmental organisations about the collective and unique commitments to combating climate change.

The group met with young climate activists that included Anguilla’s Devon Carter. They also met with Patricia Scotland, Commonwealth Secretary General and were able to speak with her. Gumbs-Marie said that Scotland is very familiar with the difficulties the OTs face and the importance of collective advocacy. She said she also met Rosemarie Cadogan, legal adviser for the Commonwealth Secretariat, who knew all about Anguilla’s Blue Anguilla initiative and committed to assist with finding finance and commended the island on its organised approach to developing the Blue Economy. The OTs group also met with the European Union Ambassador who, despite Brexit, spoke of opportunities for the OTs to benefit. She said the group was completely at home at the Caribbean Community CARICOM pavilion and made some good connections there. They spoke with Caribbean Development Bank President Gene Leon and the Minister of Sustainable Development from Belize.

“Among the most important connections made though, is the one we’ve made among ourselves.” She was referring to the ministers and representatives from the other OTs who share the same commitment as Anguilla.

The parliamentary secretary was on the panel for a special session “Our Vision for Healthy Oceans” that explored how the OTs are taking action to counter and mitigate the effects of global warming by safeguarding precious marine environments. The introduction was given by George Eustace, Secretary of State for the Environment, Food and Rural Affairs in the UK government.  He stressed the importance of the OTs that have the fifth largest marine estate in the world and 90 per cent of the biodiversity in the UK family.

There were six territories represented on the panel that was chaired by Deputy Premier of Bermuda, Walter Roban. He emphasised the importance of the OTs, which he said are at the forefront of climate change and noted that the governments of the territories are guardians of a significant amount of the marine environment.

Each of the representatives spoke about their territory and the problems and solutions they are working on. Gumbs-Marie spoke about the Blue Economy in Anguilla and the task force that was established. She mentioned the marine parks and coastal protection methods. She said that the Sargassum seaweed has been a problem on the beaches since 2015 but is now being used for dune restoration.