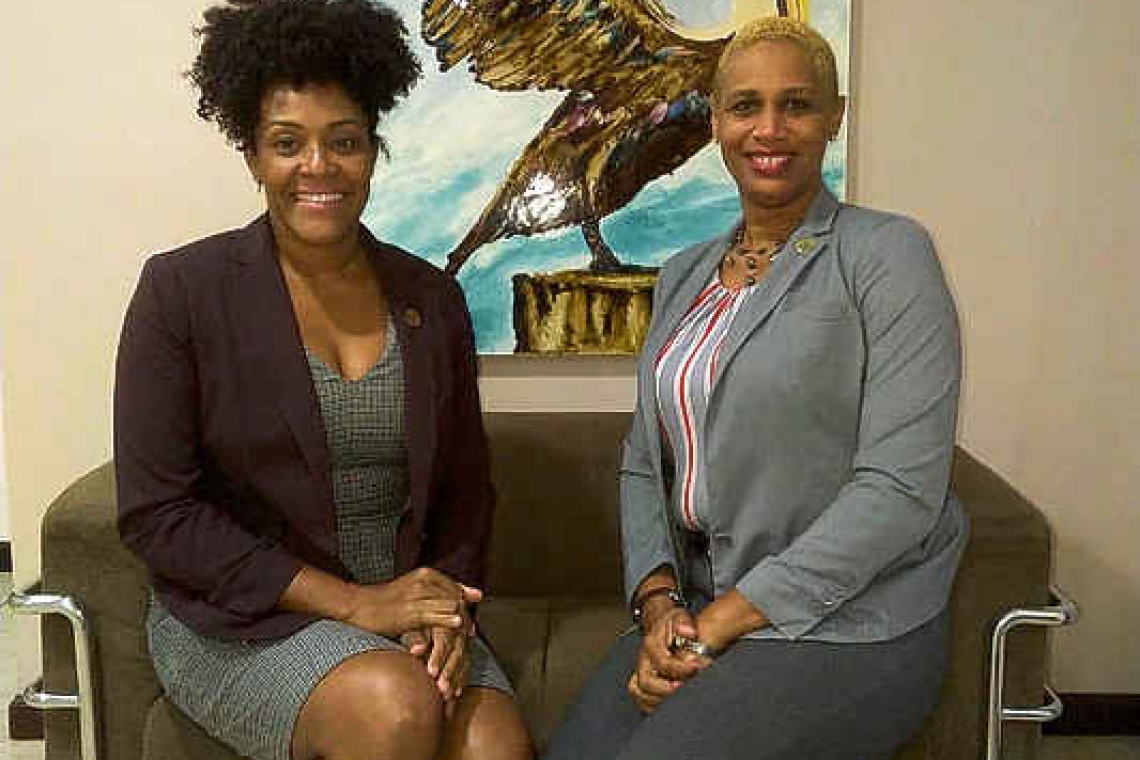 PHILIPSBURG--Eleven Members of Parliament (MPs) on Thursday approved a motion to have the decolonisation process of the former Netherlands Antilles finalised as soon as possible, with opposition from three MPs, one of whom felt that the motion was a “sneaky” approach to push a particular opinion and another saying it trampled on discussions MPs have had over a two-day period.

The motion, tabled by United People’s (UP) party MP Grisha Heyliger-Marten, was passed by 11 MPs voting in favour and three against.

The motion, among other things, invokes the right of St. Maarten to directly present its case for decolonisation to the United Nations General Assembly (UNGA).

The motion resolves to “immediately retain” local and international legal counsel to assist Parliament and government to end “the violations of St. Maarten’s UN-mandated right to a full measure of self-government; completing the decolonisation of St. Maarten and the other islands of the former Netherlands Antilles with the assistance of the United Nations in accordance with the past, present, and future obligations of the Netherlands under international law and obtaining reparations from the Netherlands for violations of international law and norms as well as its treaty obligations.”

The motion also instructs the Council of Ministers to urgently and with immediate effect, initiate dialogue with “the legitimate governments” in the Kingdom of the Netherlands to prepare a Kingdom Round Table Conference by July 2021, during which “all legitimate, democratically elected governments within the Kingdom of the Netherlands will ratify, and commit to the complete decolonisation of the former Netherlands Antilles in accordance with article 73 of the UN Charter, relevant UN resolutions, international treaties, and other sources of international law.”

It also resolves to establish a Permanent Committee on Constitutional Affairs and Decolonisation, which shall “be empowered” to prepare, monitor, and assist with the processes outlined in the motion and inform Parliament of developments related to these processes; coordinate as necessary, with other Parliaments within the Kingdom of the Netherlands; communicate with other international bodies when necessary and make recommendations to the Parliament regarding the processes and goals outlined in the motion.

It also instructs the Chairperson of Parliament to bring the motion and its underlying documentation to the attention of the legitimate legislative, executive and judiciary branches within the Kingdom of the Netherlands, the United Nations General Assembly, COPPPAL and CARICOM. Additionally, to have it added to the agenda of the Inter-Parliamentary Kingdom Consultations (IPKO) meeting scheduled for January 2021 and mandates the Chairperson of Parliament to communicate with any and all third parties on its behalf, where it concerns all matters related to the motion and its execution.

The motion also invokes the right provided by the approved amendment to UN Resolution 945(X) to directly approach the UN General Assembly, “now that the need has arisen.” It also endorses the initiative “and legal actions” of Foundation Pro Soualiga related to the decolonisation of the former Netherlands Antilles, as well as the private initiative in Curaçao with a comparable objective and declares any actions, including proposals and legislative action(s) and/or initiatives by the Government of the Netherlands which do not treat the interests of the people of St. Maarten as paramount and/or violate the Netherlands’ continued obligations under article

73 of the UN Charter law, and St. Maarten’s UN-mandated right to a full measure of self-government based on absolute equality with the Netherlands under the Kingdom Charter as null and void, and therefore inoperative with immediate effect.

Party For Progress (PFP) MP Raeyhon Peterson said he received the motion ten minutes before it had to be voted on and he does not agree with the content. Peterson said he had been under the impression that the new committee would be active in discussing how to move forward. “Now within the same meeting of the establishment of the committee, it seems as if a firm opinion has already been formed without discussions taking place. The same discussion that we understood by the presenting MPs, was actually the main goal [of the committee – Ed] – to discuss and involve the people, yet this motion is asking the government to make moves towards a specific opinion, one that I don’t necessarily share.”

Peterson said he does not understand where the motions are going, but he noted that this one in particular is “a sneaky way” to push an opinion forward which he thinks should have come at least after the first meeting of the decolonisation committee on the mater, not before the committee has even been formed. “I was under the impression that we were moving forward with complete transparency and dialogue, but now I have my doubts.”

PFP MP Melissa Gumbs said it was a blitz to receive the motion which she did not have an opportunity to study. “It seems to trample over everything that we just discussed yesterday [Wednesday] and today [Thursday]. It also counters, a bit, to what MP Duncan, as one of the initiators has said, that this committee is going to be about dialogue and about engaging the people,” Gumbs said noting that Pro Soualiga Foundation, which is mentioned in the motion, does not represent the people or the opinion of the masses. This, she added, is what MPs are elected to do – represent the people.

United Democrats (UD) MP Sarah Wescot-Williams said while she can support the establishment of the Permanent Committee for Constitutional Affairs and Decolonisation, she could not support the motion because she would be forfeiting her rights of being able to engage in discussion in the decolonisation committee.

NA MP Christophe Emmanuel said the legislature seems to be “a parliament of motions,” since almost every week or every other week, motions are presented. He, however, registered his support for the motion because the only thing it tramples on is “the manner and the behaviour in which we are being treated by the Kingdom Government and this is the first step… and I want to be on the side of history to say that I signed this motion. If the status is not for us, then it will devastate us and that’s what’s happening right now.” He cautioned government indicating that he does not expect to see anything “coming through the back door.”

United St. Maarten Party (US) Party MP Claudius “Toontje” Buncamper said the only thing the motion tramples on are the consensus laws that were forced upon St. Maarten. He said if the decolonisation committee, supported by the motion, can accomplish things then it would be better than what St. Maarten has at the moment.

NA MP George Pantophlet said St. Maarten currently does not have a full measure of self-internal government. “We have a measure. This is a process towards full measure and then later on independence,” he said.

Prior to presenting the motion, Heyliger-Marten said it was an historic moment. She said the motion solidifies and supports the Permanent Committee on Constitutional Affairs and Decolonisation. “Decades ago, the highest body in the world, the United Nations, made decolonisation one of its core objectives. And up to this day, it continues to repeat the call to finalise the decolonisation in all its forms. We as a young island nation are now finally giving decolonisation its rightful place,” she said in a press release issued after the meeting ended.

“The constructive participation of all stakeholders here and abroad will be crucial for making the work of the Permanent Committee a success. It will ultimately benefit the people of St. Maarten. The first major milestone towards finalising the decolonisation would be a Round Table Conference in July of next year. I look forward to the cooperation of all partners within the Kingdom and the UN towards making that a reality,” she added in the release. 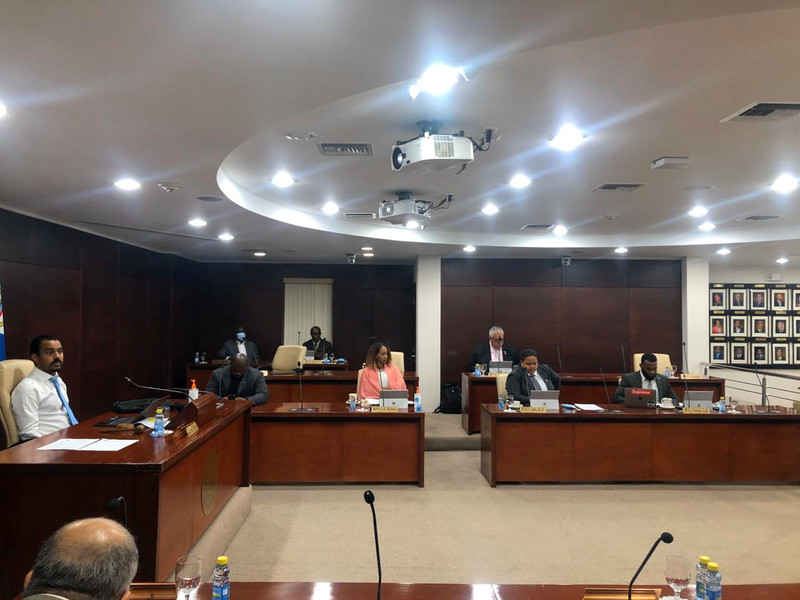 A scene during Thursday’s meeting.